Dabit (다빗) serenaded his Filipino fans as he held his first showcase in the Philippines at Staple and Perk Bakery, in Makati City on September 10, 2016. It was a small showcase, yet great memories were created for his fans. We had an exclusive interview with Dabit before the showcase began. But before that, let’s get to know Dabit. 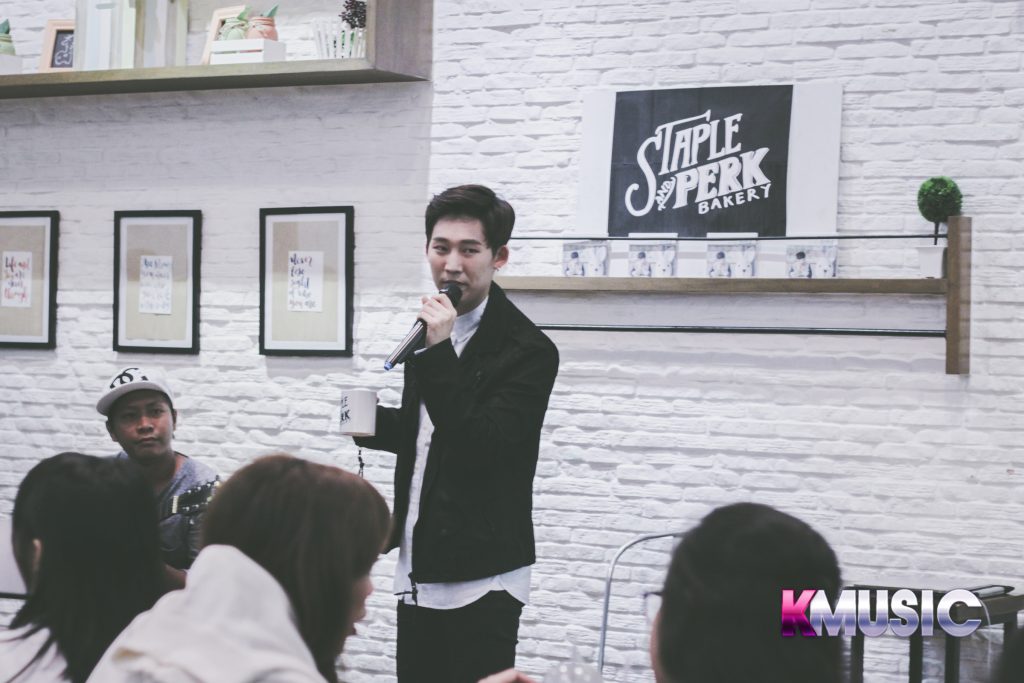 Dabit, also known as David Kim, is a Korean-American singer, songwriter and radio DJ. He was born and raised in Ohio, USA. He was a scholarship recipient in Berklee College of Music. Afterwards, he moved to Seoul, Korea to achieve his dream of becoming a singer and songwriter. He officially debuted as Dabit on December 5, 2013. However, before that he trained under Choeun Entertainment for one (1) year to debut with the group 24k, not long after the debut, Dabit left the entertainment to pursue a different path. He signed with KoffeeDream Management (KDM) to help him with his singing and song-writing journey. All of his songs were written, composed and produced by Dabit himself. 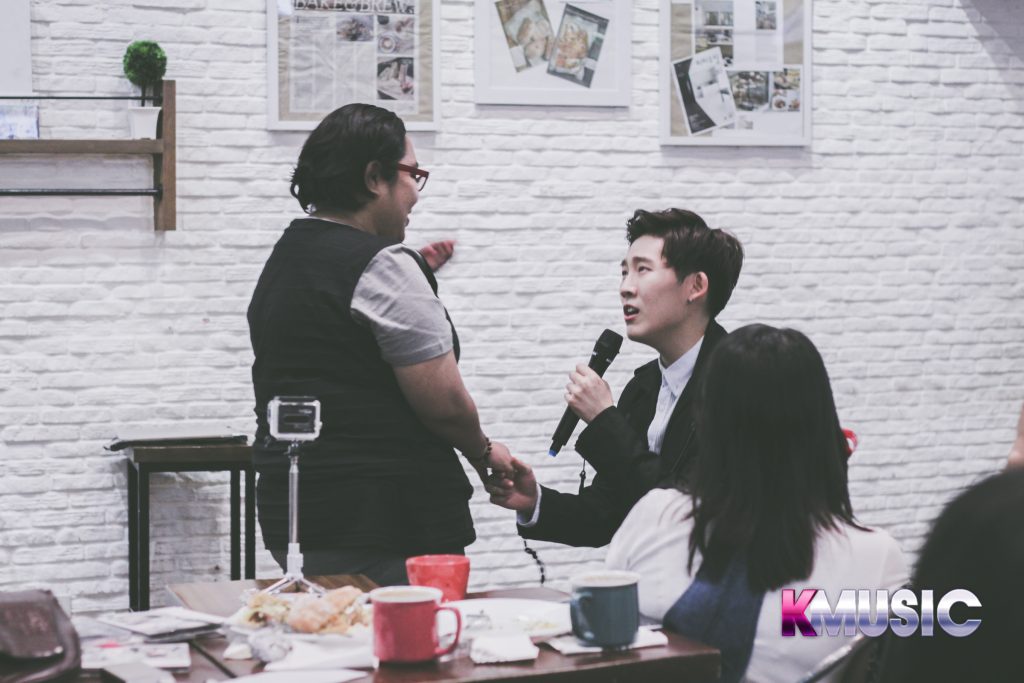 After his debut, his first fan meeting was held on December 21, 2013. In 2014 he had interviews with various media companies, to name a few they were 10ASIA, Soompi, K-Crush, Arirang Radio and TBS Radio. On the same year he has been invited to perform in different festivals, launchings and universities. He also became a permanent radio co-host on “Pray 4 U” with ZE:A’s Kevin in the segment called “Hot Beat”. He has also done international fan-meetings with Myeongdong Tourist Information and had 3 European fan-meetings held in Korea. Also he was the 2nd K-Pop artist to be invited in Tunisia at LG’s K-Pop World Festival Preliminary where 2000 fans attended. He has also made a cameo appearance in SBS’s drama “Endless Love” as a band member (guitarist). 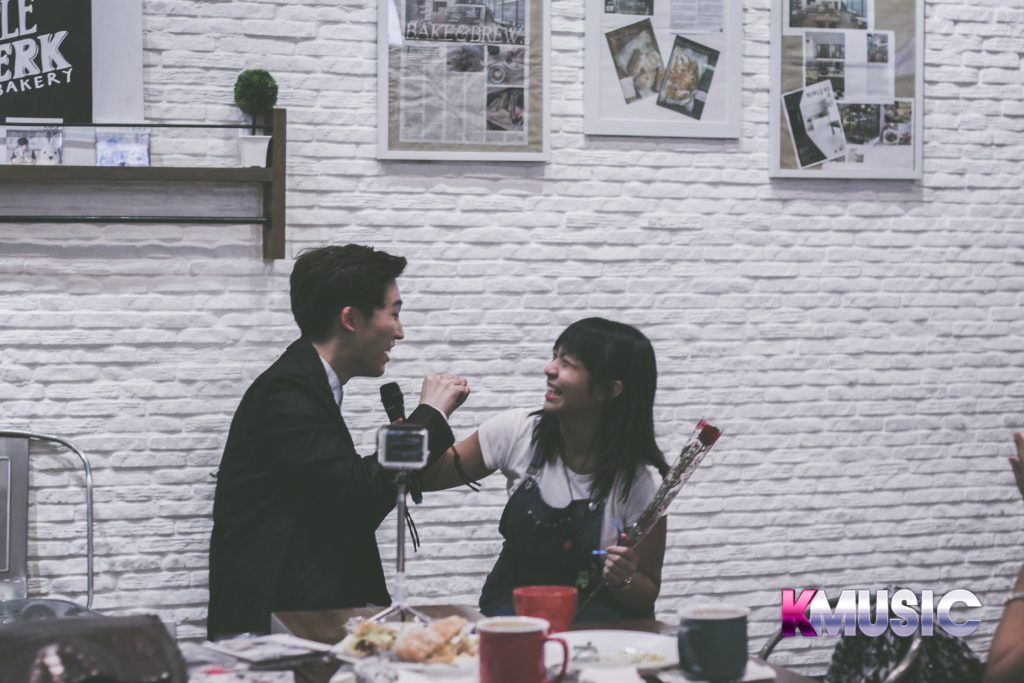 On 2015, he made another cameo appearance in the last episode of MBC’s drama “My Unfortunate Boyfriend” as an antique shop attendant (Link: https://www.youtube.com/watch?v=2RPursCFCic). He also became a radio co-host for Arirang Radio, and TBS radio for the month of January with R&B duo As One. From October – November he had his Europe Tour where he was able to hold fan-meetings in France, Ireland, Germany, Belgium, United Kingdom and Netherland. On November 21st of the same year he was able to hold a fan meeting in Toronto, Canada. Earlier this year he held a fan meeting at Shin Chan High school in Seoul on March 23rd, had a performance in Café Unplugged, in Hongdae, Seoul on April 15th and another fan-meeting in New Delhi, India on May 17. 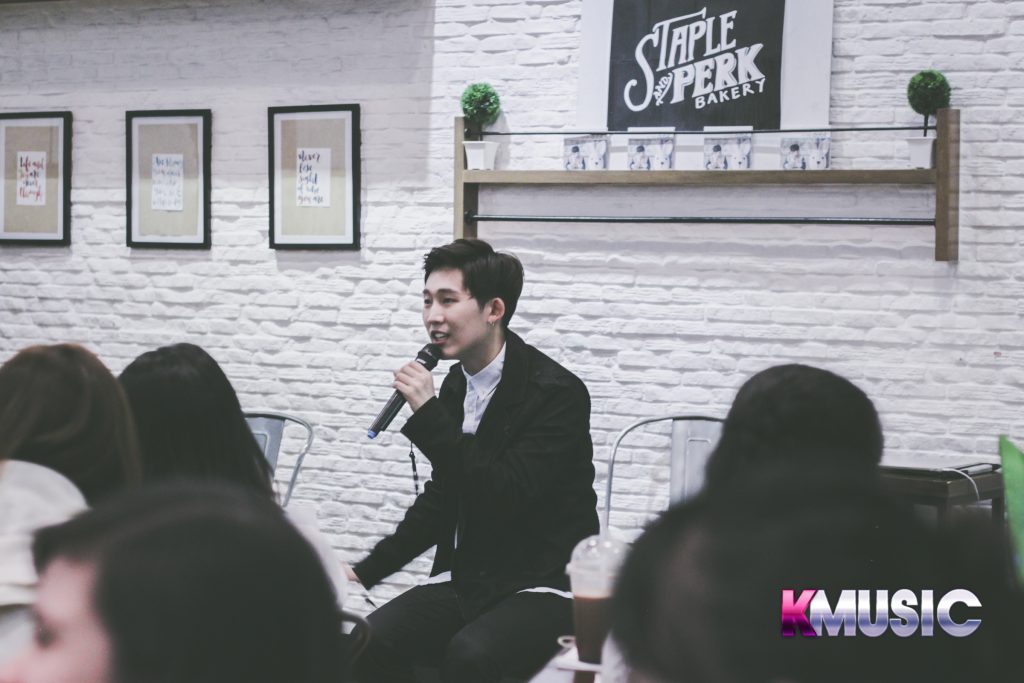 Going back to the interview that we mentioned earlier, we were able to ask him three questions and he answered them with enthusiasm.

KMUSIC: What Filipino food have you tried?

KMUSIC: Is there a story behind the name “Dabit”? Is it a nickname?

Dabit: My English name is actually David Kim. And when I came to Korea to train there were a lot of Korean-Americans and Korean-Australians that were coming (in the country) and I found out that there was more than one were named David and we were getting confused so to distinguish myself from the others, David became 다빋으 (dabideu) and 다빋으 turned into 다빗 (short term). It has a similar meaning to my real name, which is Jeong Uk (정욱) which means “all light” and even though there’s a slight difference with the spelling the meaning is the same. Also it has a reference to my American side but it’s also connected to my Korean side. So I feel like it’s a well-represented word that’s unique to me.

KMUSIC: What’s next for Dabit?

Dabit: What’s next for me? Well you know it’s a process. I’m still living life. I enjoy living life. Towards my career it’s been part of my life. I still have a lot to learn. I still have a lot to experience in life and my goal is to make music that’s from life experiences. So, hopefully as I mature, my music matures with me. I’m looking at a long-term process and hopefully I’ll be able to make music for a very long time. Keep enjoying music, keep writing music, keep expressing myself, (also) maybe doing some other stuff in slightly different fields as well; I’m doing radio, maybe I’ll do something more with that later on. I’m also thinking about acting as well. I’m thinking about it as it comes. As of now, I’m just working on a couple of new albums.” 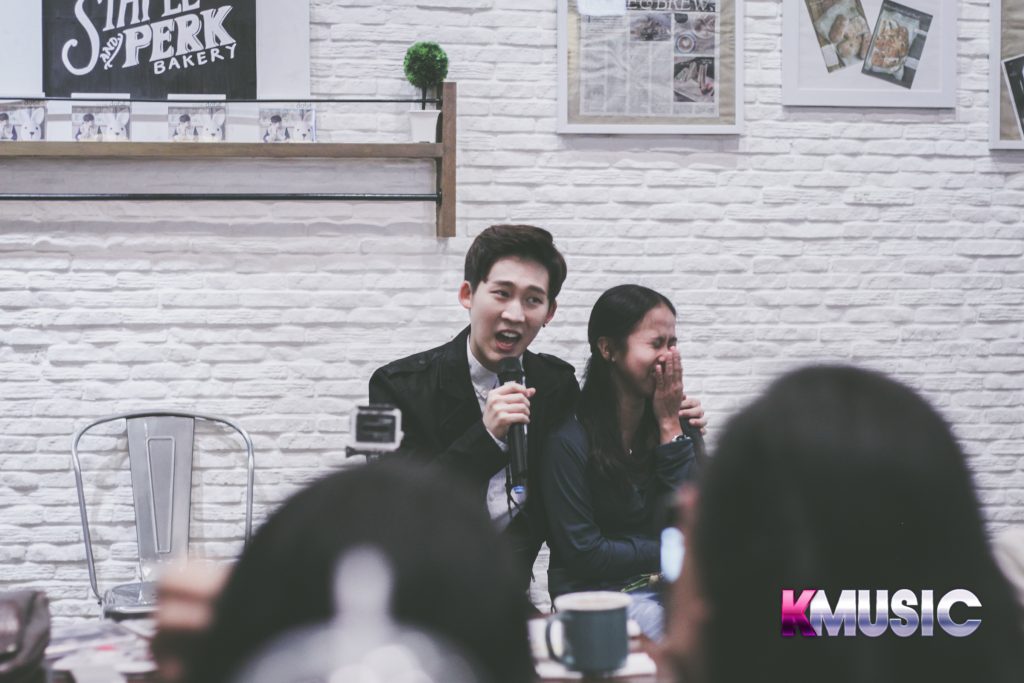 Some interesting facts about him are; it’s not his first time visiting the Philippines. A few years back he visited the country to visit his parents who lives in Tagaytay. He wasn’t able travel around the country back then but he hopes to sightsee while he’s here. Also, his type of girl is someone who is cute, weird like him (in a good way of course) and loves to eat!

During the fan meeting, Dabit sang a few of his songs from his albums, including “Zone Out” and “Whoo Whoo.” He even made a cover of “I’m Yours” by Jason Mraz – his favorite artist. He sang other songs that he serenaded five lucky fans, which for sure they enjoyed very well. 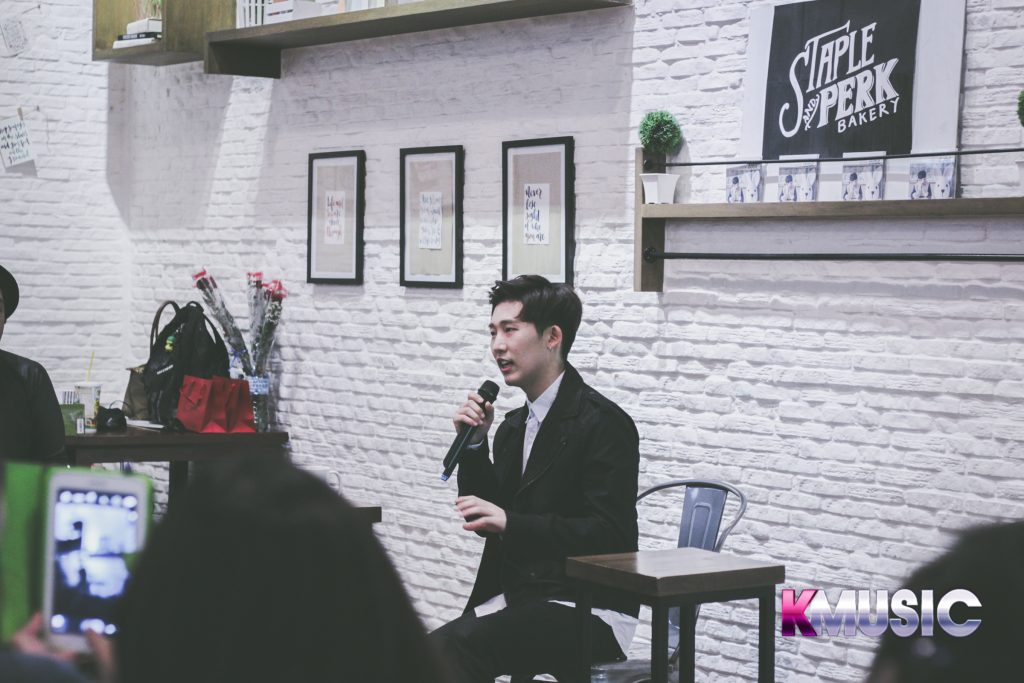 And he sang “Ikaw” which is a Filipino song sang by the Filipino artist, Yeng Constantino. Fans sang along with him when he was having a hard time in the most adorable way. Thank you Dabit for making an effort to sing that song to us!  Before the fan-meet ended, there was a raffle where two lucky fan girls will be having a 30-minute date with Dabit himself. 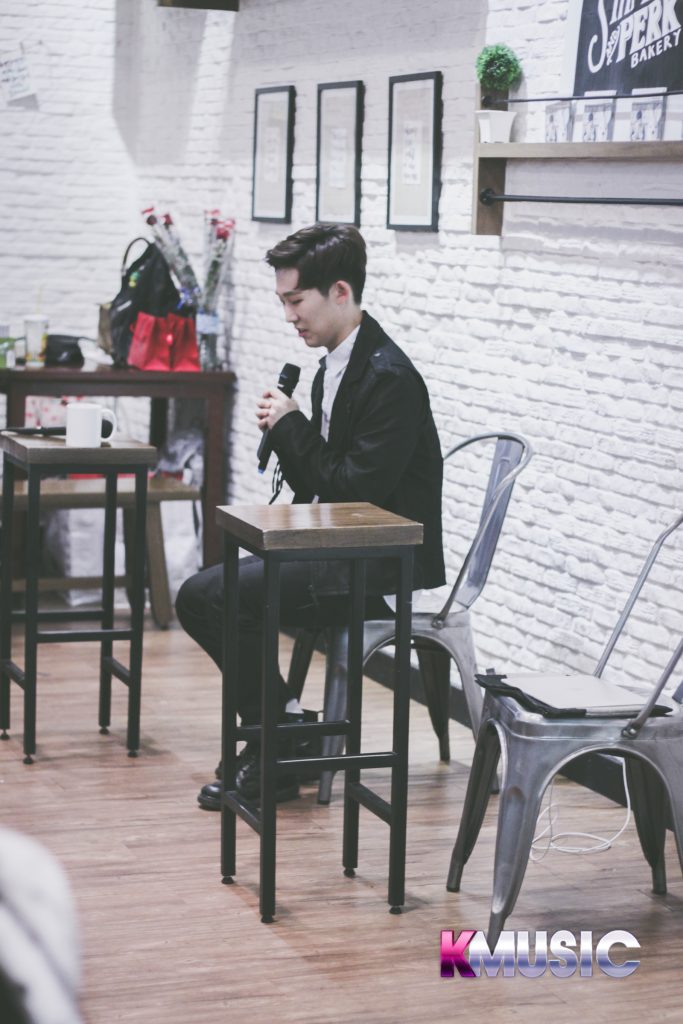 It was a memorable event for everyone, and we would like to thank KoffeeDream Management (KDM) for bringing Dabit, Staple and Perk Bakery for accommodating the event and for having us.

Stay tuned to Officially Kmusic for all your exclusive KPOP news and coverage! Our photo gallery of this event will be uploaded to Facebook soon!

Article and Photos by: Rin