In the last few months the European fans were restless and over-excitedly planned their trips to Berlin. Why so? Because one of the most anticipated bands yet announced their European tour for 2019 and the D-day was coming close!

The band´s concert sold out in the speed of light and fans from all around Europe gathered in front of Columbiahalle with hearts overflowing with joy. Despite the freezing temperatures some fans decided to wait in front of the venue from early morning hours to secure the best spot in front of the stage. No one wanted to miss the opportunity to be as close to the guys as possible, to see their smiles up close and enjoy the performance with the best view. But even the fans with the general tickets had a very good view and thanks to the huge screens with LIVE projections, everyone could enjoy the concert, seeing the guys from every spot in the hall.

Even though the weather was against everyone, the spirits of the fans were still shining bring in the snowflakes. They chatted happily, made new friends, danced to their favorite songs played from mobile phones and prepared for the projects they planned for the evening. And when the doors finally opened, it was the beginning of the most anticipated moment for everyone. 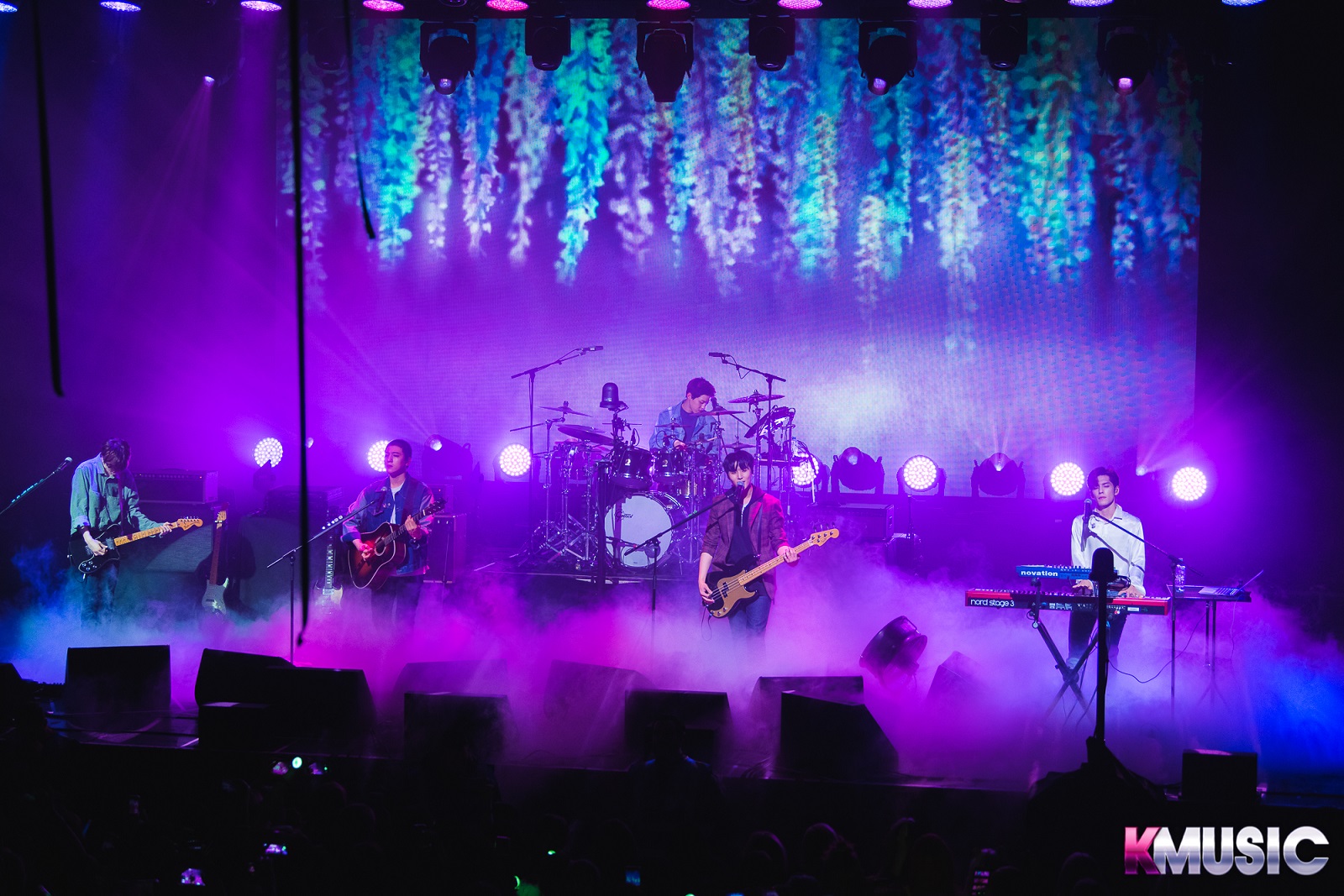 DAY6 started off with “I smile“, one of the band´s most staple songs, following with “First time“, “Better better“, “Whatever” and “Say wow“. The members did not stop for a while and continued with “Pouring” and “Somehow” before having a ment break to great the fans. Each member introduced themselves using learnt Germany phrase for “I am…” which took the fans off-guard and made their hearts jump in excitement when they heard this basic sentence from the mouths of their idols.

After a very short introduction the band did not let the fans wait for long and they continued the concert with another set of songs. In total, the concert´s set-list introduced us with 26 songs, incorporating the older hits with the newest chart-breaking tracks. Fans jumped to “Dance dance“, got excited for “Shoot me“, or got emotional while singing “Congratulations” together with the members.

The full set-list we present here: 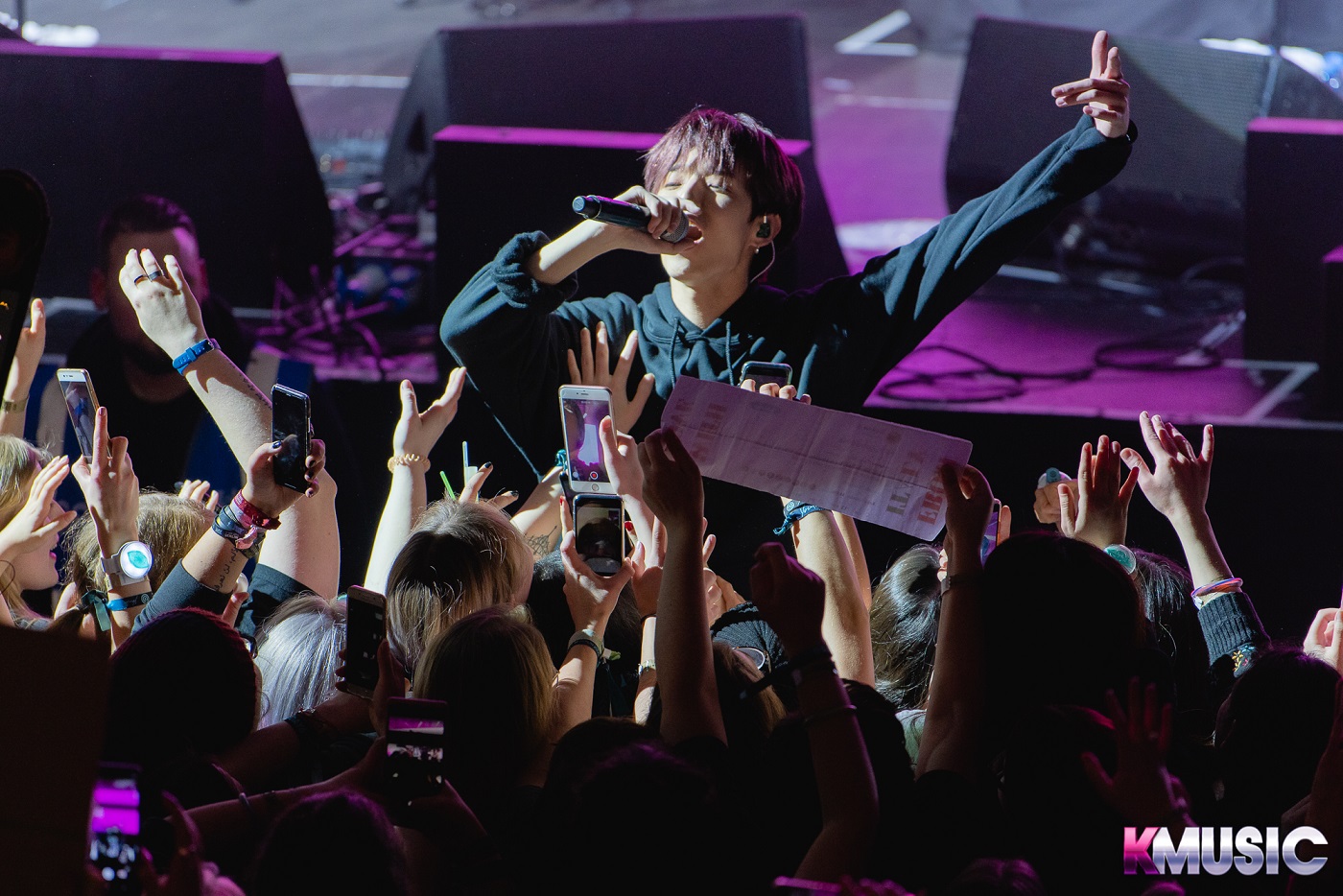 One can truly tell how much Day6 enjoy performing and how much they love their own songs and fans. The huge one-stage screen showed the members while performing and seeing the happy smiles on their lips when performing was one of the many hints showing how much they enjoyed the concert. And as much as the members enjoyed the show, fans did just as equally. Everyone showed a support Berlin did not see in a while. Fans chanted loudly, jumped without a break and cheered for the boys from the bottom of their lungs, leaving us deaf.

Jae, Sungjin, Young K, Wonpil  and Dowoon took only short breaks in between some songs to catch-up with the fans and slow down for a bit. We have to give them credits for the energy they showed on the stage, singing, playing their instruments and giving it their best. Especially the lively Jae who jumped and danced with his guitar for most of the songs.

Young K was also nicely surprised when he tested the fans by singing a small part of random Day6 songs and the fans immediately followed up and sung the rest. He praised everyone for knowing all the lyrics and even admitted the voices of their fans are even more beautiful than the voices of the members themselves. 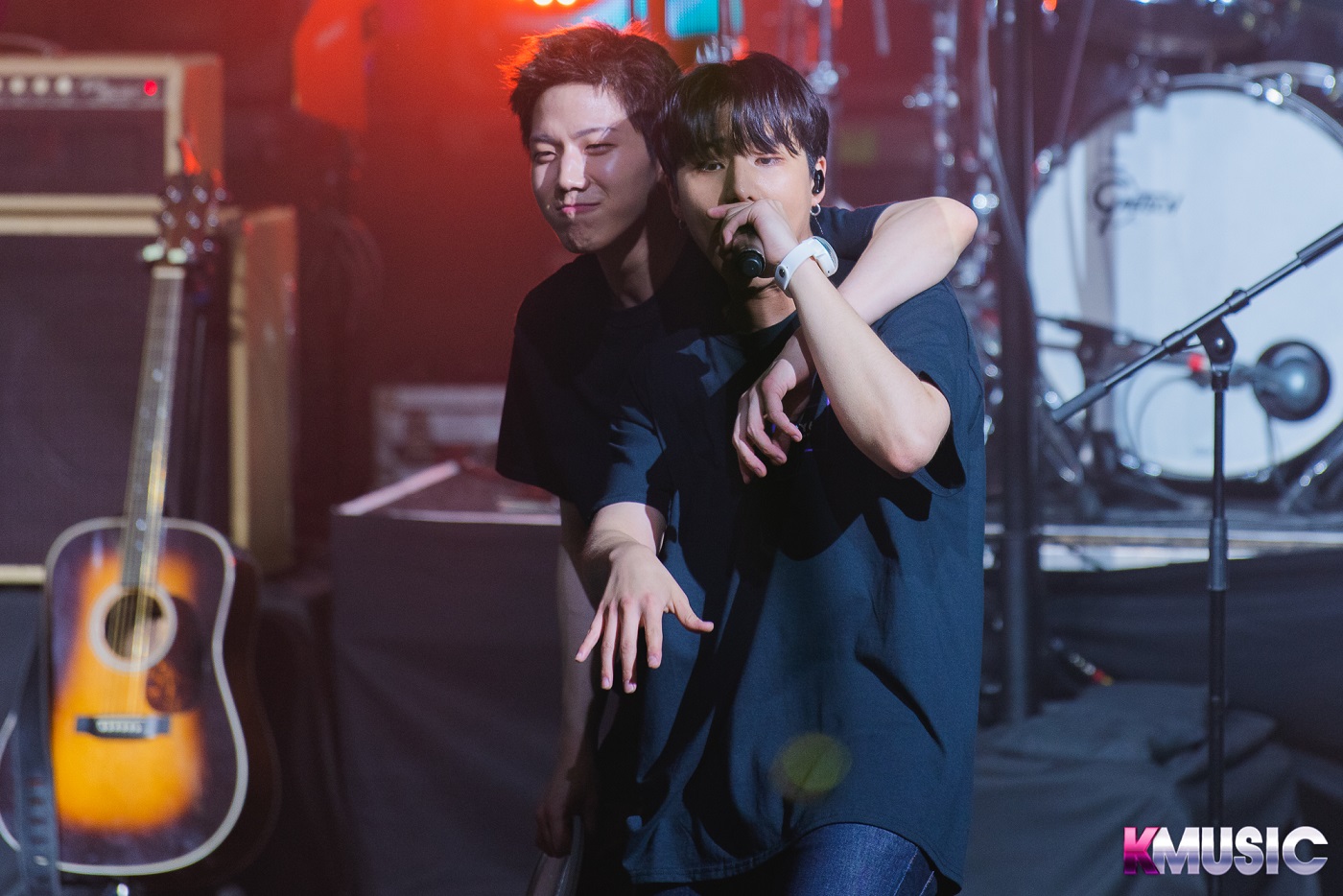 Day6 showcased their love towards the fans and the eagerness to make them smile and laugh at several occasion during the night. One of the most memorable moments was when Sungjin asked the fellow members whether they know how to body roll. To which Jae, being the most hyperactive one, showed a movement most closely reminiscing a dolphin jumping out and into the sea. Dowoon said his version of a body roll is a drums´ sound and Young K announced that from that moment on, this melody is a new body roll.

For the last group of songs Jae showed the fans a big heart and shared: “Ladies and gentlemen, it has been a beautiful evening, but unfortunately we are down to the last segment. But there is a catch! This next segment has songs which are very important to us. And today we want to share them with you. So let me make it clear right now, it is not DAY6 performing it is us (including the fans) performing. Are you guys ready to sing a little bit?” The following fews songs included “Congratulations”, “You were beautiful” and “I loved you”. And the fans showed an incredible support while singing the lyrics together with Day6.

And there were also a few notable interactions during the encore songs. Some members hugged each other, some playfully bickered for a bit on stage and Jae even stepped down from the stage and sung in front of the first row of fans, not leaving anyone out of the performance. 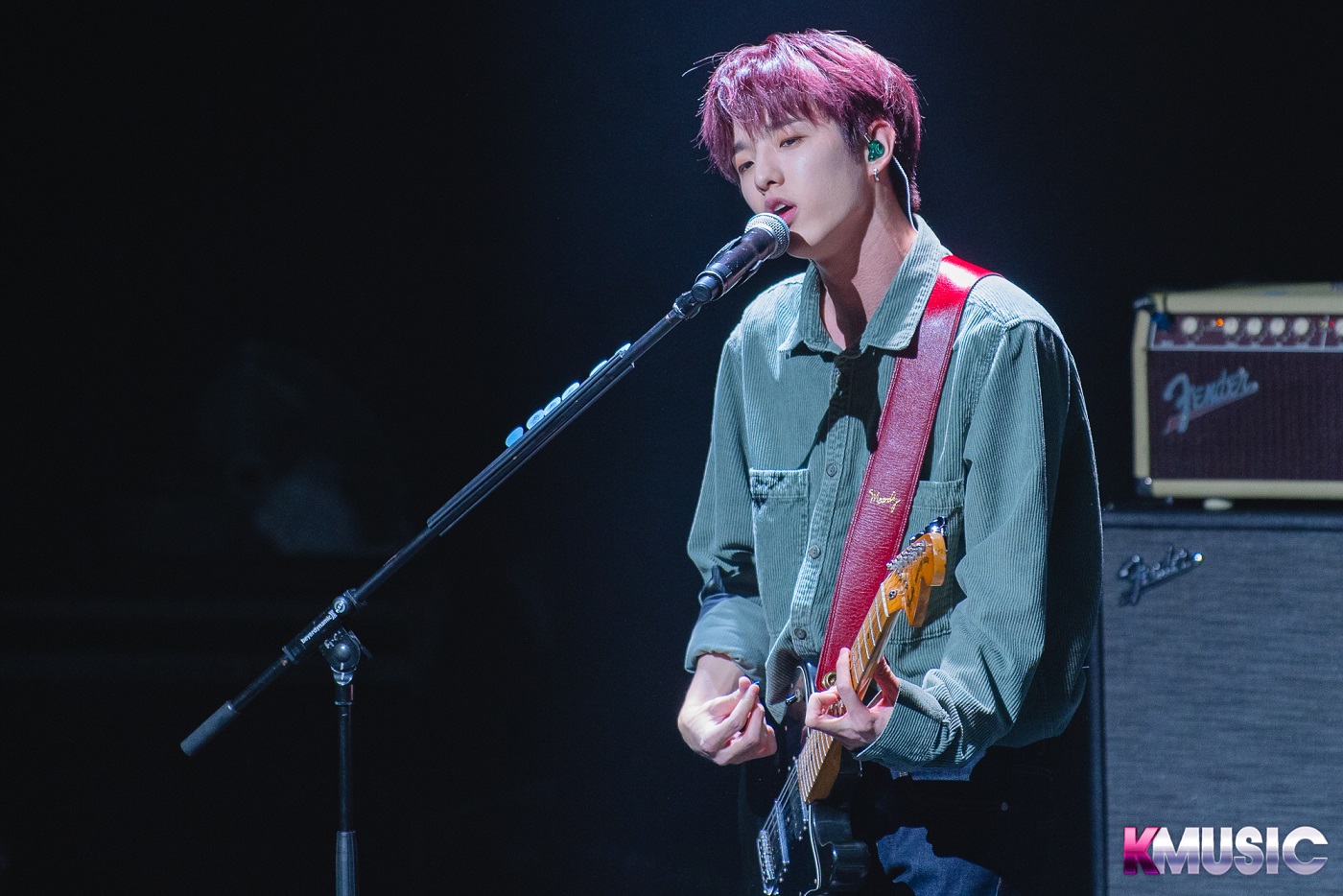 The concert had amazing lights and stage set-up. The huge screen broke into parts during some songs, showing not only the members, but also fitting pictures or colors depending on the song played. The fans were showered with paper confetti for more than three times during the whole concert. The overall aesthetic was pleasant to the eyes and heart. When Day6 played for example “Warning” the stage transformed into sea of red with massive “warning” word at the back. During the song “Days gone by” the set-up switched to a very colorful one, showing the members with their names on the screen, just in case there were some new fans in the audience. 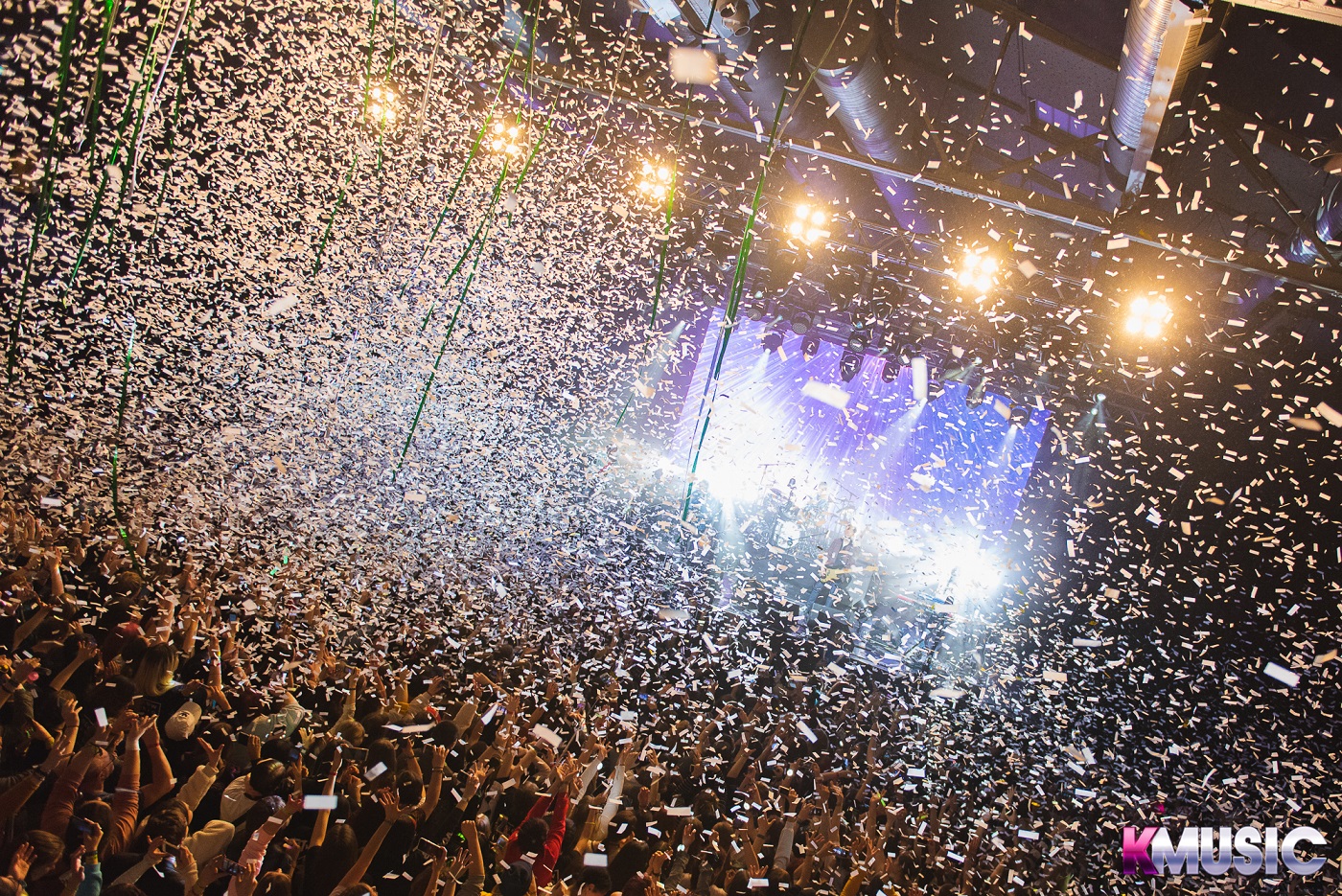 The members were leaving the stage with big smiles on their lips and even the fans could not hold back their emotions when the concert was over. Some crying in happiness, some sat down for a while to gather all the emotions in them, others shared their excitement with fellow MyDays. We believe this was the concert European fans will remember forever and wish Day6 return to Europe one day! Because the whole hall that day could agree on one thing – Day6 are incredible and Europe wants to see them again soon.

Find our full photo album on our Official FB page and keep on supporting these amazingly talented artists!