[K-Exclusive]: DPR’s Regime Tour Stop in LA is Like a Perfect Dream 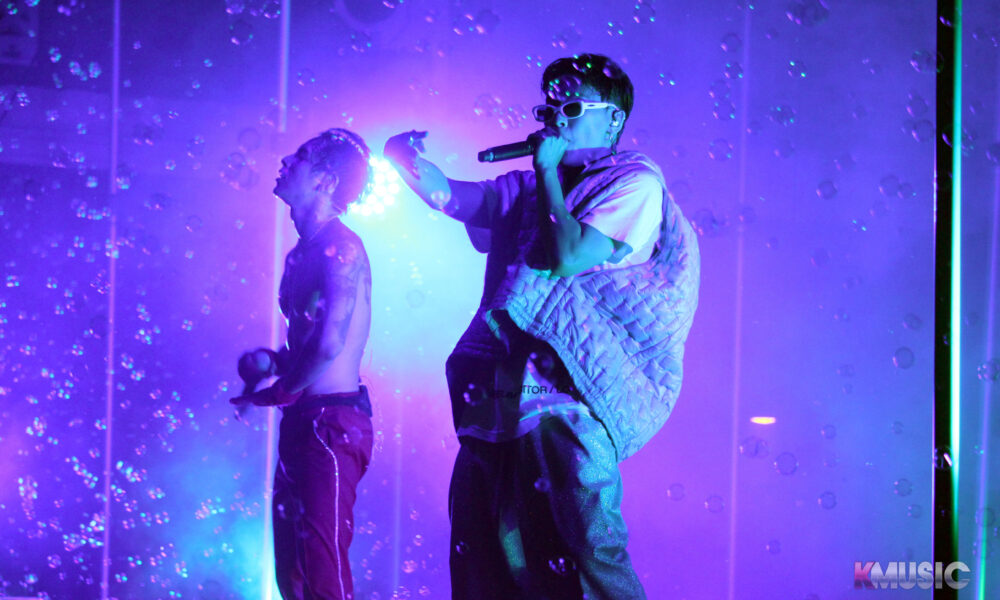 [K-Exclusive]: DPR’s Regime Tour Stop in LA is Like a Perfect Dream

DPR Cream, Live, and Ian brought their long-awaited Regime Tour to Los Angeles for a sold out show at the Shrine Expo Hall on Saturday, October 8th. Feeling more like a musical than just a regular concert, the show immersed fans into several different locations and scenes to create a memorable evening full of great music and even greater vibes.

Prior to the start of the concert, fans were welcomed into the venue to the sound of a storm and instrumental music, enjoying the light sounds paired with DPR Ian’s voice. Kicking off the show was DPR Cream, who performed several songs, including “billboard uwu,” upon coming on stage carrying what appeared to be a lit incense stick. The lingering smoke from the incense paired with the flashing lights created a unique setting for the first act of the evening, serving only as a teaser for the stage sets to come.

DPR Live was next to take the stage, starting off strong with a performance of “Legacy.” The first large setup came shortly after, as a huge astronaut inflatable appeared suddenly behind Live as he went through “Neon,” referencing back to the music video for said song. The soloist also performed several of his most popular songs, including “Laputa,” “Jam & Butterfly,” and “Text Me,” going through two outfit changes that took him from astronaut to a casual tee shirt and jeans. His performance of “Hula Hoops” brought out several round floaties being tossed around, and Live finished off his set with “Martini Blue” and “Set It Off,” with the latter featuring DPR Cline.

As the stage went dark following DPR Live’s set, a masked, horned silhouette with large black wings could be seen by a single spotlight, as the beginning notes of “MITO” could be heard. DPR Ian’s set was welcomed with a roar of cheering from the crowd, as he immediately launched into crowd favorites like “So Beautiful.” While Live’s set featured more colorful, bright lights, Ian’s performance was paired with muted colors and occasional splashes of color. Similarly to the giant astronaut during the previous set, Ian had a giant inflatable hand make an appearance during his set, as well as several hands reaching towards him through a curtain at one point of the show. Going through some of the various genres contained within his discography, DPR Ian performed songs like “Calico,” “Scaredy Cat,” and “Mr. Insanity,” before closing out his set with “Nerves” and “No Blueberries,” which was sung with DPR Live. Unlike Live’s prepared wardrobe changes, Ian’s biggest transition was from shirt on to shirt off as he opted to stay on-stage to perform as many songs as possible.

To finish the show, the whole DPR Gang came together on stage to perform “To Myself,” take a group photo, and call it a night. Although there wasn’t much of taking phones or speaking to the crowd with excessive compliments and thanks, each artist still thoroughly showed their appreciation through their performances and the amount of effort and planning each stage took. Rather than holding multiple ments, or free talking segments, the artists integrated their voices directly into the audio being played throughout the evening, as if they were narrating a story.

Reminding fans that all that DPR are able to do is because of them, the labelmates finished the night with a slew of confetti and a deep bow of thanks, as they exited the stage. Even after the show, dedicated fans waited outside the doors to get one final glimpse of DPR Cream, DPR Live, and DPR Ian, before they leave Los Angeles for the next stop of their tour in Las Vegas.

Special thanks to Kohai and DPR for allowing Kmusic to attend the show. Make sure to check out all photos on our Facebook page now!