K-EXCLUSIVE: Dreamcatcher made history in Warsaw

K-EXCLUSIVE: Dreamcatcher made history in Warsaw

Dreamcatcher, the band that captured fans all over the world with their dark-ish concept and fresh music, announced they will be coming to Europe for a tour. Kmusic noticed this historical moment and decided to share it with you, the readers. We sat down with the girls for an interview and then traveled all the way to Warsaw, Poland, to see them make their dreams come true!

In the past couple of years, the number of k-artists coming to Europe increased rapidly, but no girl group decided to tour Europe till now. It was no one else than the girls from Dreamcatcher to make this historical move as the very first girl group embarking on an European tour. And we must say the long wait was all worth it!

The fans waited in front of the venue despite the freezing temperatures. When they entered the venue, the feeling of cold was for sure overpowered by the fact the meeting with the girls of Dreamcatcher is near. Fans of all ages and nationalities ran to the main hall to be as close to the stage as possible. The stage was slightly lit by blue and everyone could see a smoke coming from each site which made the stage look somehow ghostly. When the lights became even darker and the venue went pitch black everyone started screaming at the top of their lungs, even before the girls appeared on stage. 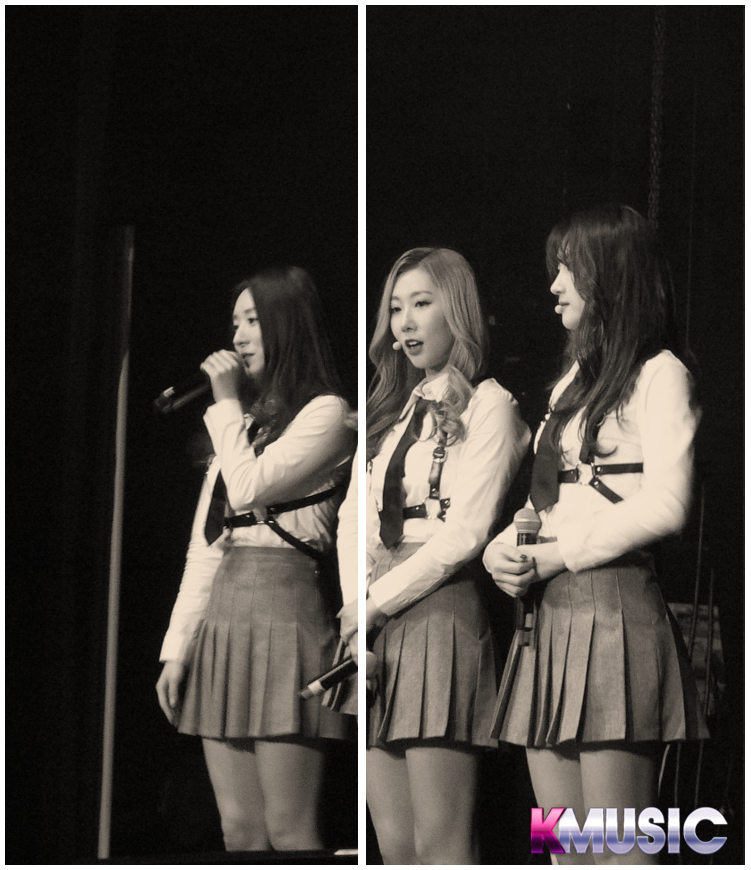 Once the stage was lightened again everyone could see Dreamcatcher walking down a few stairs, opening the night with their famous song ‘ Chase me‘, the title track of their debut album, followed by ‘Sleepwalking‘. The fans in Warsaw did not rest in cheering for the girls, shouting out their names and fanchanting hard. The group showed why they are so different from other k-groups. They are known for their horror concept and rock-like music, combined with a fierce dancing and perfect synchronization when dancing they proved everyone to be all in for the night.

After the two opening songs, the girls caught their breaths to greet their fans. There were many moments when the fans´ responses were so loud the girls could not even finish their sentences or their worlds became lost in the deafening screams.

The leader of the group Jiu shared how happy she is to be in Poland by saying: “It is our first time in Warsaw and we are so pleased to meet you all!” 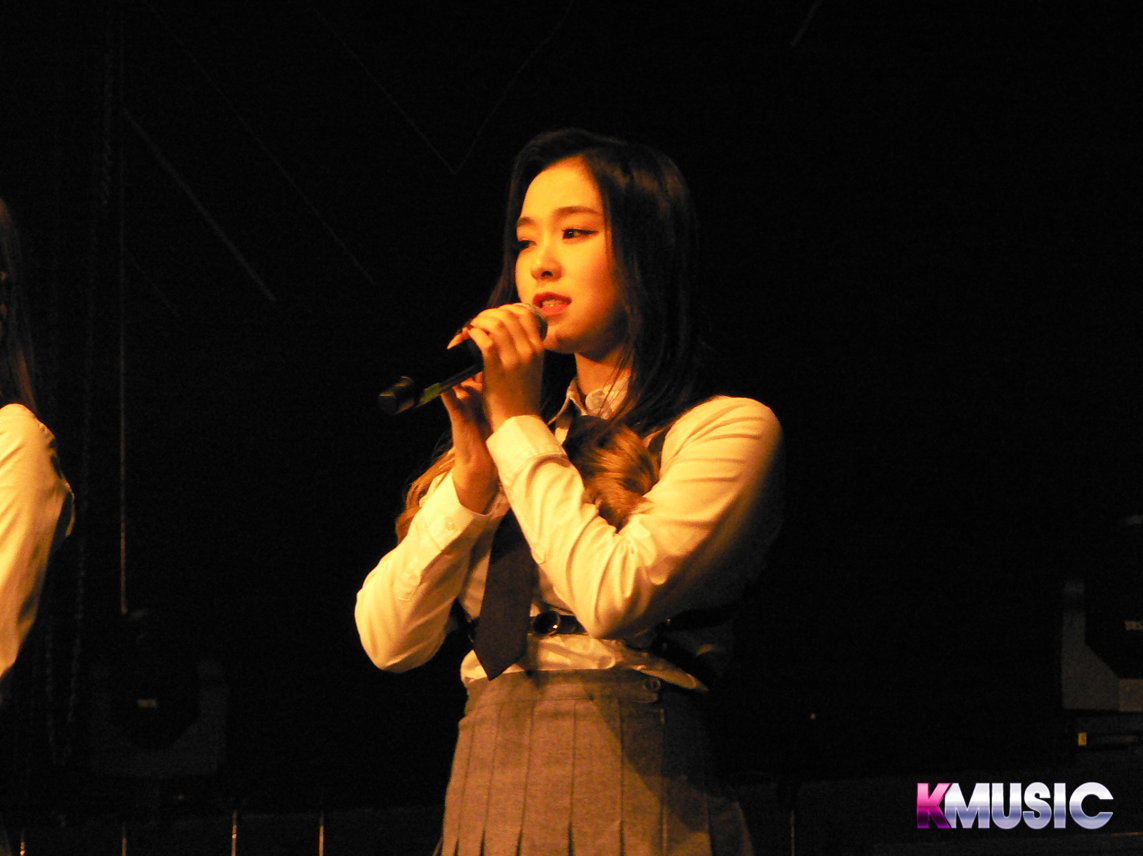 Gahyeon revealed how the fans support makes her show them the very best for this concert: “I was having a hard time falling asleep yesterday, because I was so nervous before this concert, but when I heard you supporting us by stomping your feet hard I am so thankful to be here and want to show you a good performance.” The response of the fans was stomping their feet to show even more support. The girls truly enjoyed this reaction calling it one of the cutest things they have seen.

The greetings by each of the members made a transition from the fast-paced songs to ballad ones as the girls performed ‘Trust me‘ and ‘Lullaby‘ next. Fans waved the blue lightsticks they prepared for the concert and sang in unison with the girls, making it one of those moments you remember for a long time after a concert. When the members were not the ones to sing they were sending hearts to the crowds, waving at fans and smiling brightly.

After these two songs a board with post-it-notes was brought to the stage. “Since it is our first time in Warsaw I believe you are very curious about us, Dreamcatcher,” said Jiu, the leader of the band. The girls started reading the questions fans wrote to the small pieces of papers. Since it took them a long time to pick one to answer, the fans were a bit restless and started shouting “We love you!” in Polish, startling the girls. They quickly asked a man who was translating for them for an explanation and when they found the meaning of the words they responded by shouting “Saranghaeyo!”, making the fans changing their chants into Korean as well. 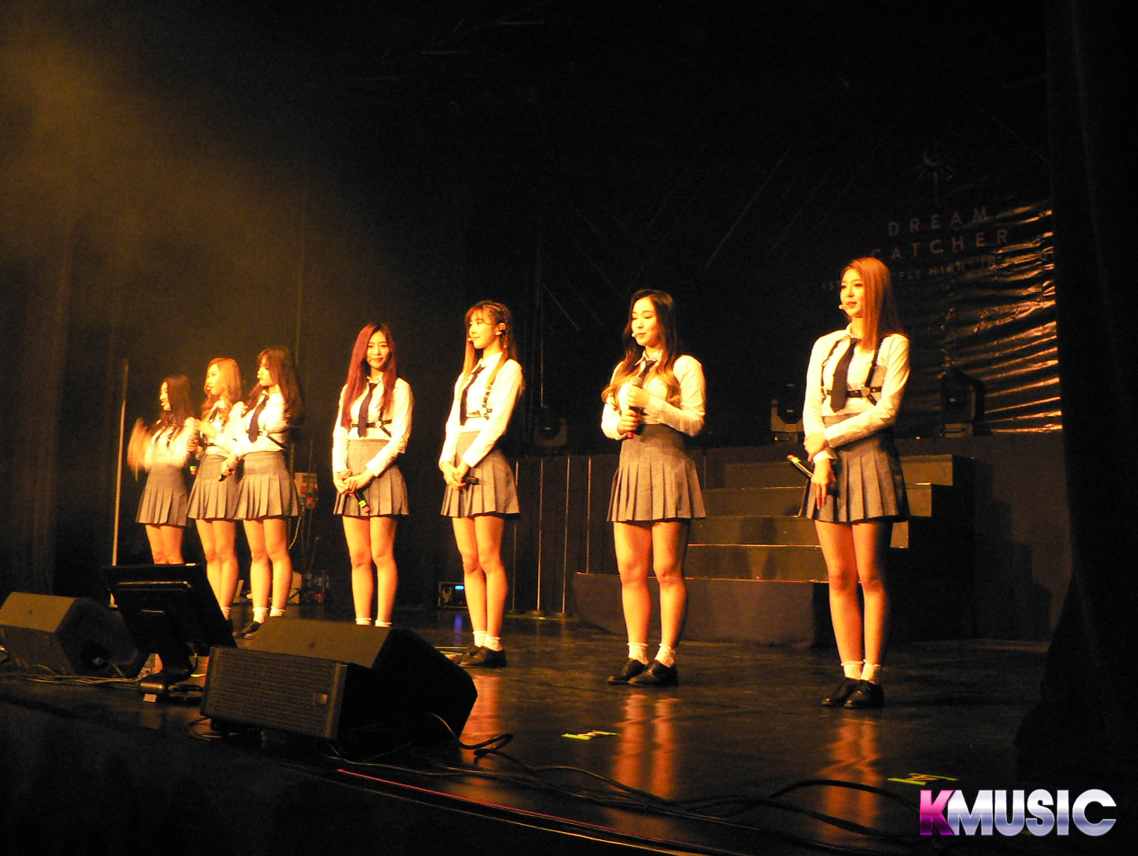 The first post-it-note was picked by Gahyeon. The question “Who can drink the best from the group?” made everyone join a heated discussion. In the end they turned the question around and Yoohyeon with Dami were voted to be the ones who are really bad at drinking. The next request made everyone in the venue exited as Sua was asked to show her famous anaconda dance. Her fellow group members were surprised when they asked whether the fans know the lyrics to the song and the response was an instant singing from the crowd. Sua then performed a very short, but sexy dance, which most probably made it the highlight of the whole Q and A session the girls prepared for the fans.

The next question “Tell us something nice about the person standing next to you.” created a cute chaos on the stage as everyone wanted to stand next to a certain person to either receive the feedback from them or to say something about a specific person. When they finally agreed on the formation they started with their worlds of appreciations. Jiu shared that Siyeon has a lot of cute aegyo and upon hearing that fans started to demand her to show something cute which later on resulted in each of the member showing their own aegyo when it was their turn. “She is really beautiful friend with a lot of charms,” said Siyeon about Dami.

Dami then praised Sua by saying there is nothing Sua cannot do. “She dances and sings well and she even plays the piano!”. When it was Sua´s turn to say something about Gahyeon the fans once again demanded an aeygo and upon seeing Gahyeon making one they all went crazy for her cuteness to which Sua said “Our youngest member is really cute. I think of her as my own daughter. Also, isn´t she beautiful?”. It was Gahyeon´s turn then to say something nice about Yoohyeon. “She is always doing her best and she is beautiful. She sings really well…and she is also very tall!” Yoohyeon then compared Handong to an angel asking her whether she fell from heaven, to which Handong teasingly asked “How do you know?” Handong then admired how tall and beautiful their leader, Jiu, is. 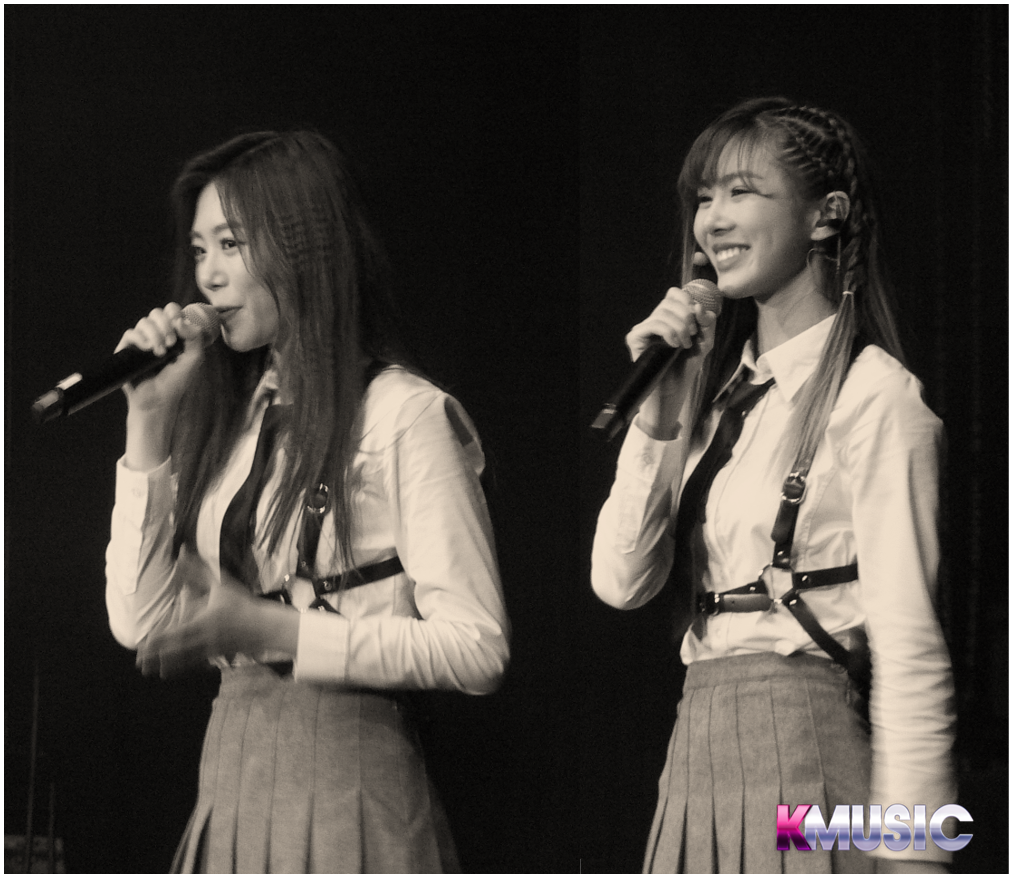 After this segment where fans got to know the girls a bit more, everyone left the stage. Later on Gahyeon, Sua, Dami and Yoohyeon returned to perform a cover of  Pink´s ‘Just give me a reason‘. Jiu, Seyeon and Handong then performed a very uplifting cover of Maroon 5’s ‘Sunday Morning‘, making everyone bounce from one side to another following the rhythm.

When all members came to the stage later on they performed Taylor Swift’s ‘We Are Never, Ever Getting Back Together‘ and SNSD´s iconic ‘Into the New World‘. After such light dose of amazing songs it was time to change the atmosphere and get the fans excited again. Dreamcatcher stepped on the stage again to show their dance cover to Maroon 5´s ‘Lucky strike‘. The girls uploaded a video with the dance cover to Maroon 5´s song some time ago, but seeing it live was a totally new level as everyone could feel how heated the stage was, especially when the girls taught the fans how to chant beforehand.

When everyone thought they cannot surprise us anymore, the group performed a passionate, powerful and simply breathtaking dance cover to  Imagine Dragons’ ‘Believer‘. It was a performance everyone got goosebumps from and will for sure remain in their memory for a very long time. This segment filled with unbelievable covers was closed by their own song ‘Emotion‘.

One of the last talk breaks included the group calling out random numbers. Fans with the specific number said won a polaroid photo made by the group. At some point one of the fans threw a Polish flag to the stage. The girls picked it up instantly and decided to take a photo with it. After everyone posed for the photo with fans behind their back, it was time for the last two songs ‘Full moon‘ and ‘Fly high‘ to be performed. It was as if the fans were waiting just for these songs as they showed even more support and were even louder than before, if that was even possible at that time. The venue was shaking with the nonstop shouts of love when the group finished their dance for the last song. 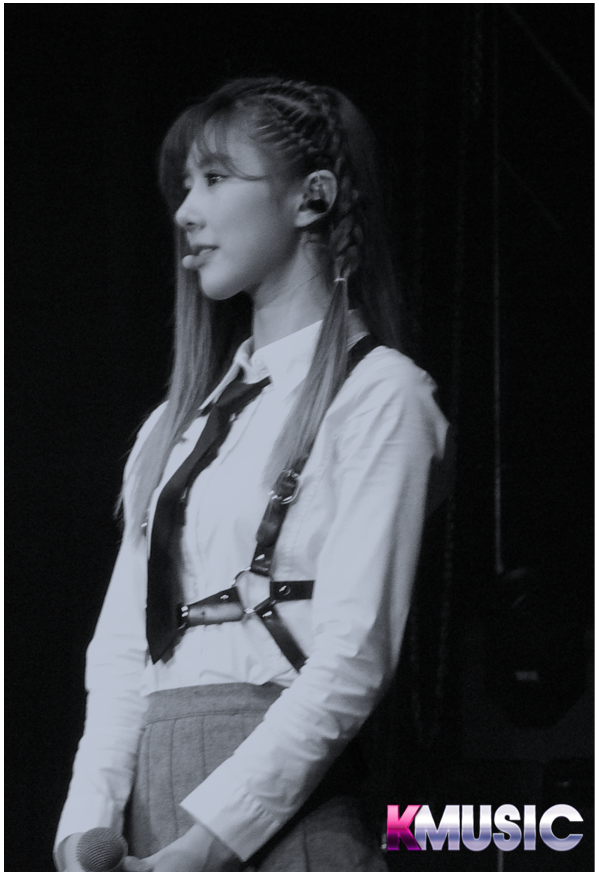 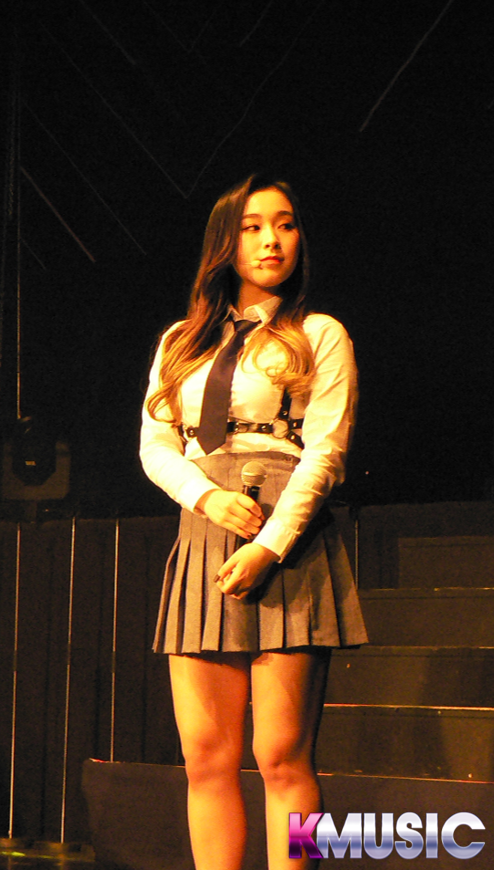 It was impossible to believe the two-hour long concert is already over. The girls thanked the fans for coming and hinted an encore will follow so it is not their last goodbye. And as said, they later on returned to the stage with ‘Goodnight‘ and cover of Seo Tai Ji’s ‘Regret of the Times‘. After the very last song it was the time to say the true goodbye. The fans, with tears of joy in their eyes, cheered for the group for the last time, chanting their names and trembling with the excitement the girls brought to them. The girls seemed to be energized, but also sad to leave the stage at the same time.

Dreamcatcher proved that the fans in Europe are more than ready to welcome more girl groups tho we must also add that they put the bar very high. We sincerely hope they will return to Europe soon! And we are also very sure it will be just as amazing concert as this one was.