K-EXCLUSIVE: Ending the Summer With A Bang – #KCON16LA DAY2!

K-EXCLUSIVE: Ending the Summer With A Bang – #KCON16LA DAY2!

The first day left KCON Los Angeles Presented by Toyota goers with a huge impression as the anticipation for day two began to fill the air. BBC, Sones, Army, and more came to the Staples Center expecting yet another memorable night. 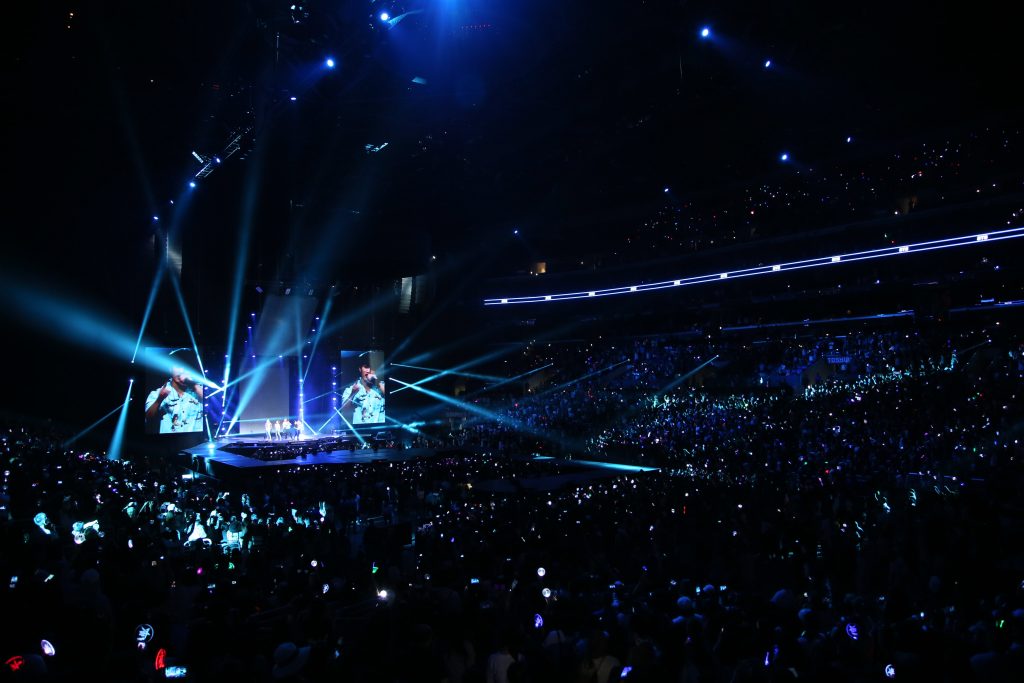 The stadium filled to the brim yet again and the chatter was at an ultimate high as everyone expressed their huge excitement for the night to come. Before the show actually started, KCON had a bit more of a treat for us with a preshow. Taking the stage first were a very powerful Violin and Base duo Echae en Route. The ambiance and tone of the violin and base together sent chills throughout the audience. Then, when the violinist began to sing, the crowd silenced even more so at the beautiful performance. Next was a ‘flipping’ awesome Taekwondo group that entranced the crowd with “oohs” and “ahhs”. The MC warned those close to the stage that they may have some flying boards at them and boy he was not kidding. The athletes flipped and smashed through boards like crazy and by the end of the performance, after sailing both the US and Korean flags, the stage crew scrambled to the stage to clean up all of the broken boards. It truly was a neat performance.

Finally, the moment all of the fans had been waiting for has arrived and the intro to the concert began. “Lets play, Let’s KCON”. The stage quickly lit up with the first performance by none other than Monsta X. They performed their song “Yessir” to start the night and followed with some more up beat dancing songs such as “All In”, “Hero”, and who could forget their debut track “Trespass.” 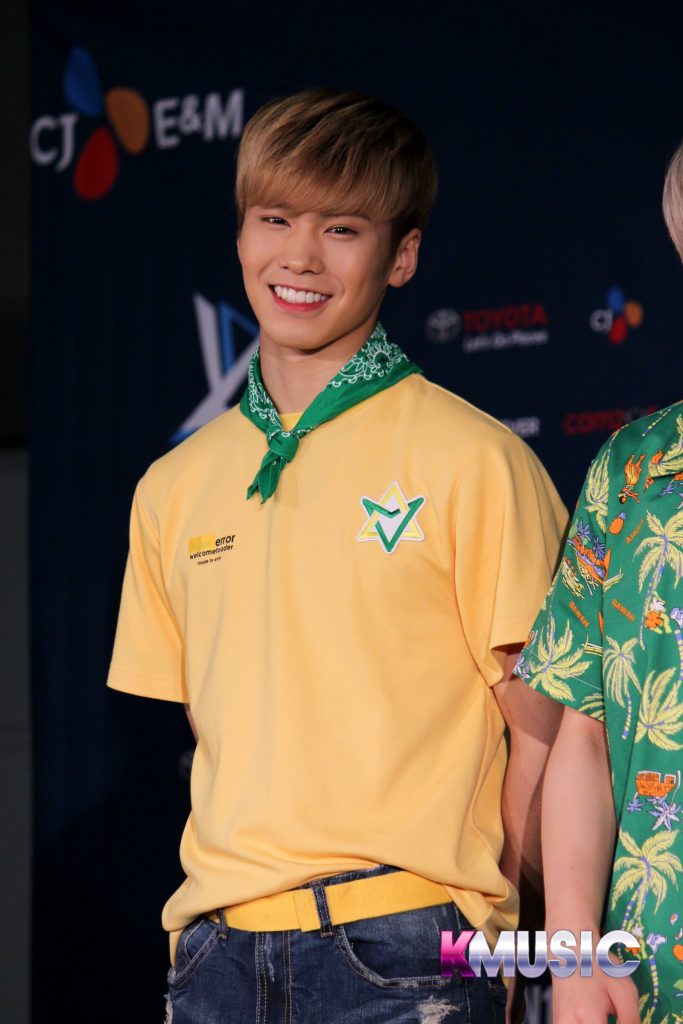 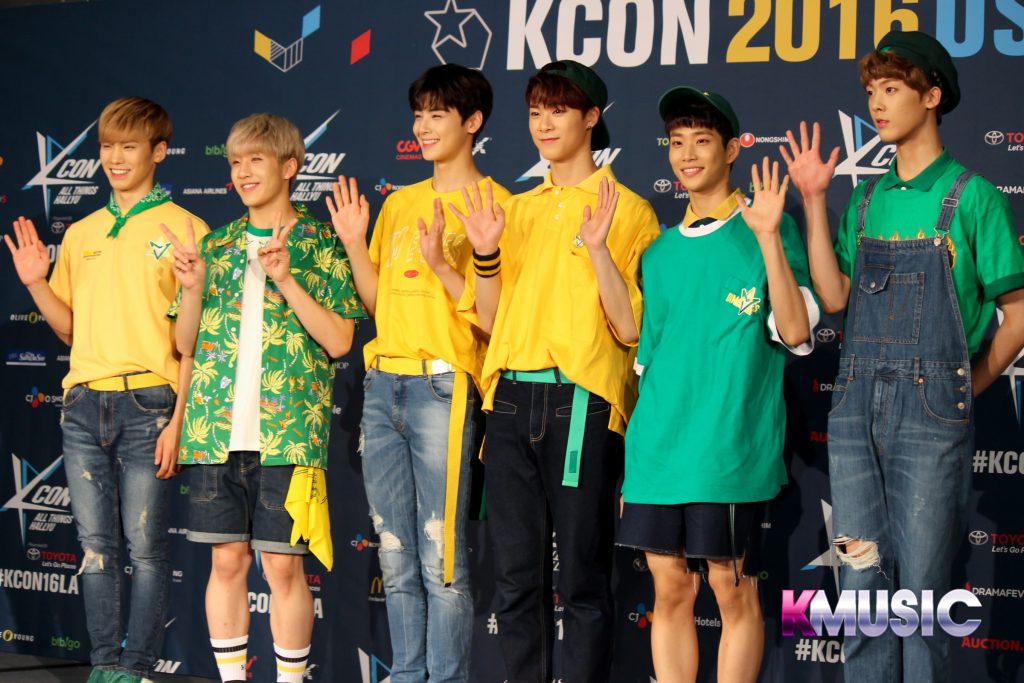 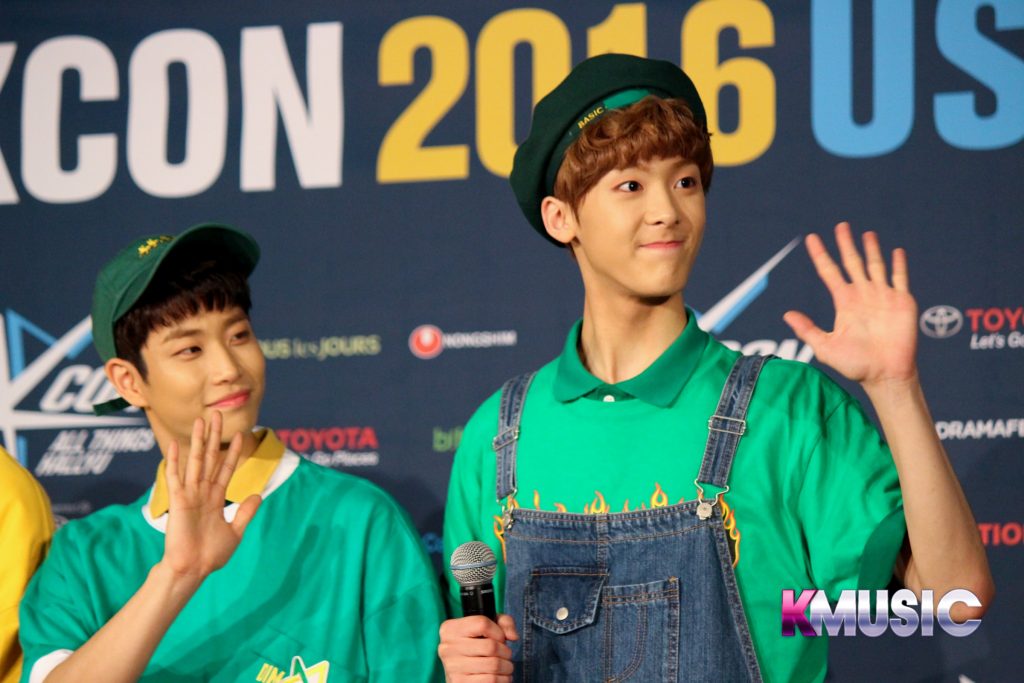 To perform second at KCON’s finale show was a newer boy group called Astro. These bubbly boys dressed in vibrant colors captured the hearts of the audience. They performed their song “Breathless” and continued with their bubbly charm for two more songs. Those who attended and may not have known of Astro surely will remember these adorable boys. 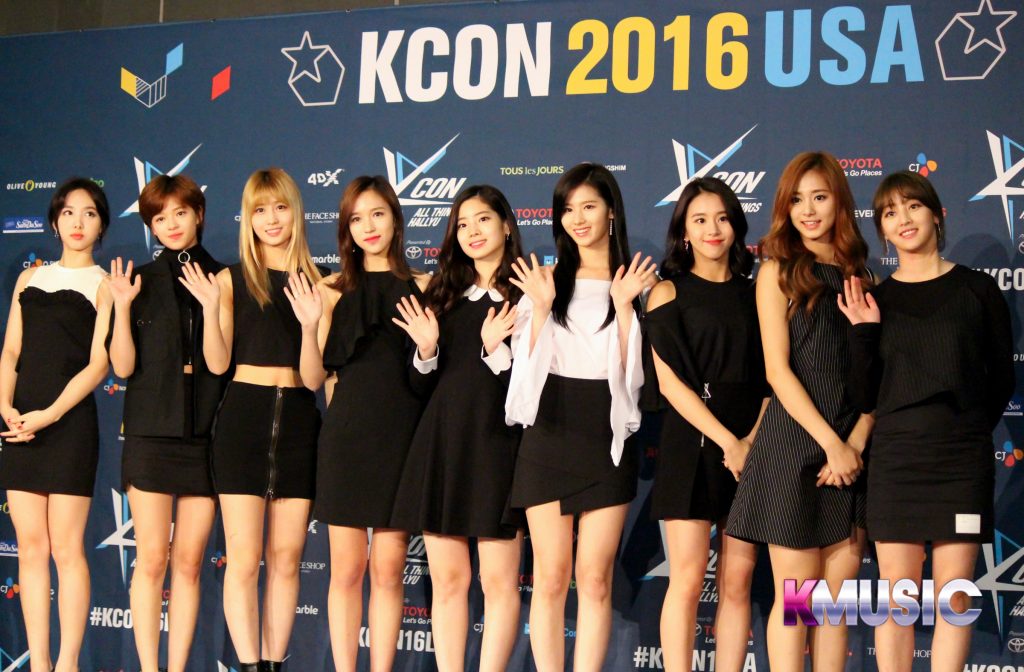 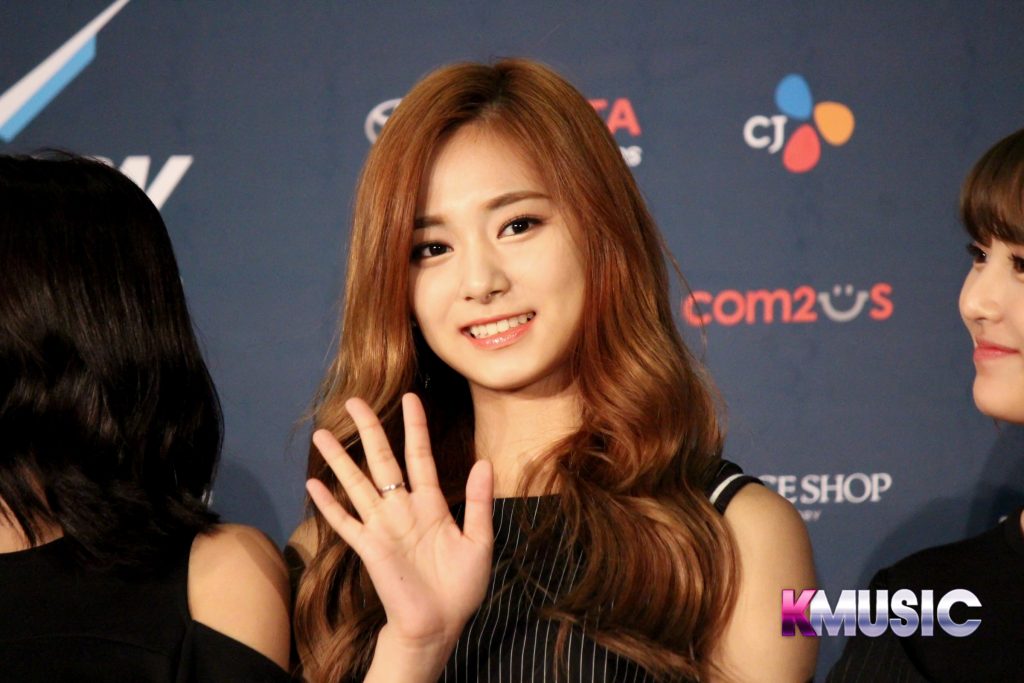 Following was the cheerful girl group TWICE. Prior to the performance, a group of cheer leaders took the stage and did some acrobatics to introduce the first song. Those who have been following TWICE would know that they were about to perform their hit song, “Cheer Up.” And no nobody’s surprise, the girls hit the stage and the audience literally sang and danced along to the iconic choreography and tune. They then introduced themselves to the crowd and performed the song, “I’m Gonna be a Star” and walked throughout the entire KCON stage to greet their fans. Finally, they all migrated to the back of the stage and performed the song that got them to be so popular, “Ooh Ah”. Yet again, fans danced like crazy to the choreography. 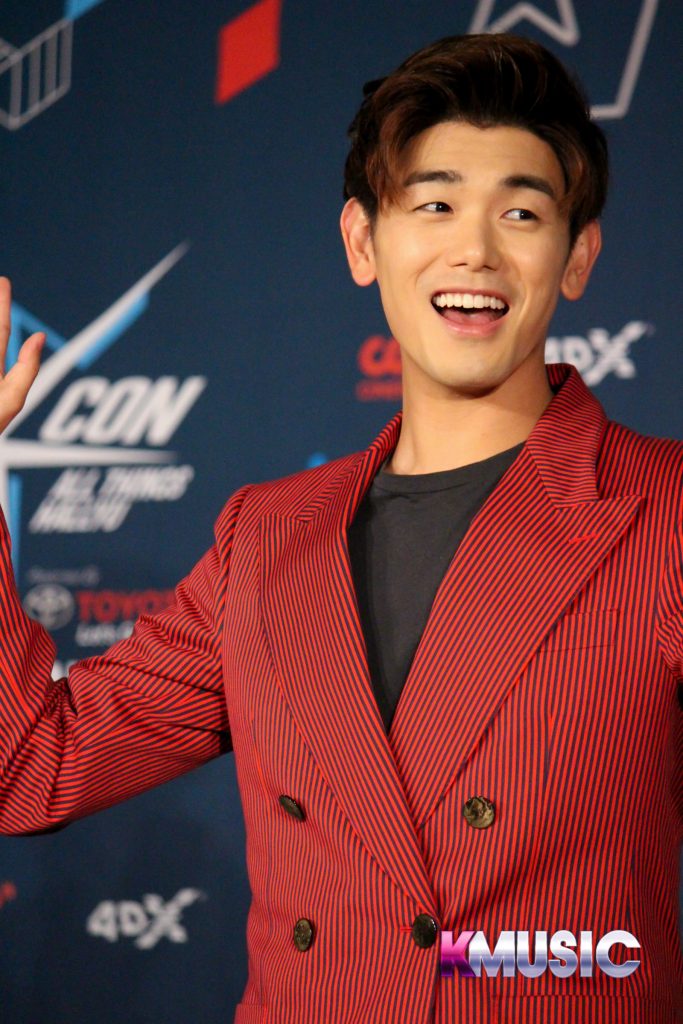 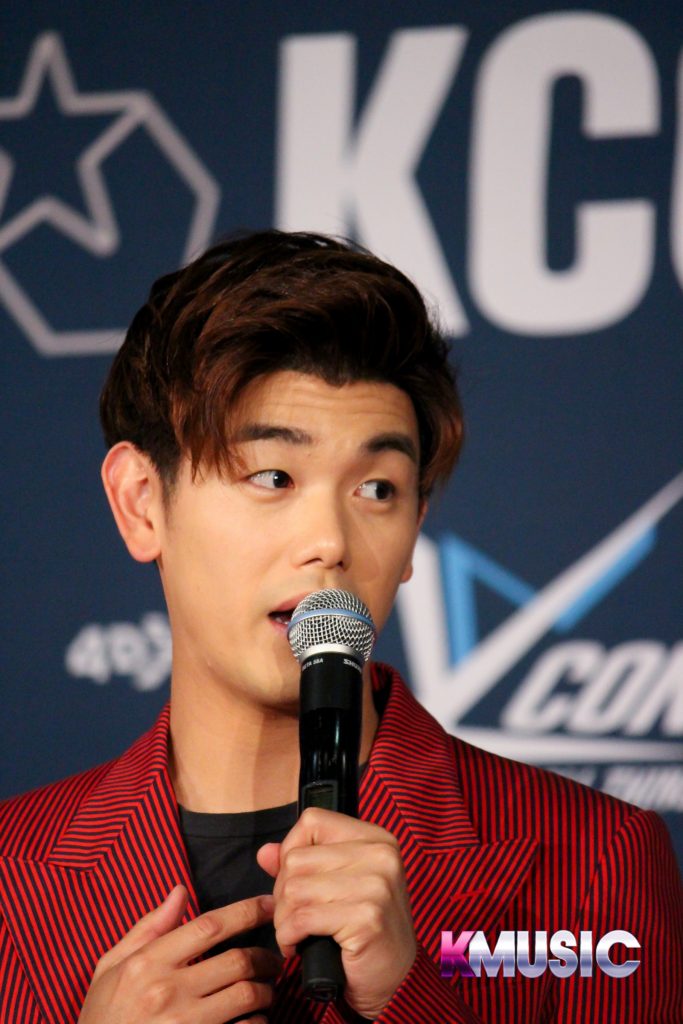 After the spunky girls left the stage, soloist Eric Nam took to the stage with his funky tunes and beautiful voice. He performed “Good for You” and took the crowd by storm. After performing on his own, he asked a special friend Kolaj of his to come to stage and help him perform his English song, “Into You”. He warned the audience that things might get a bit steamy with this new song, and boy did it get heated! Following was yet another special guest, Amber of f(x) joined Eric on stage to perform “I Just Wanna”. 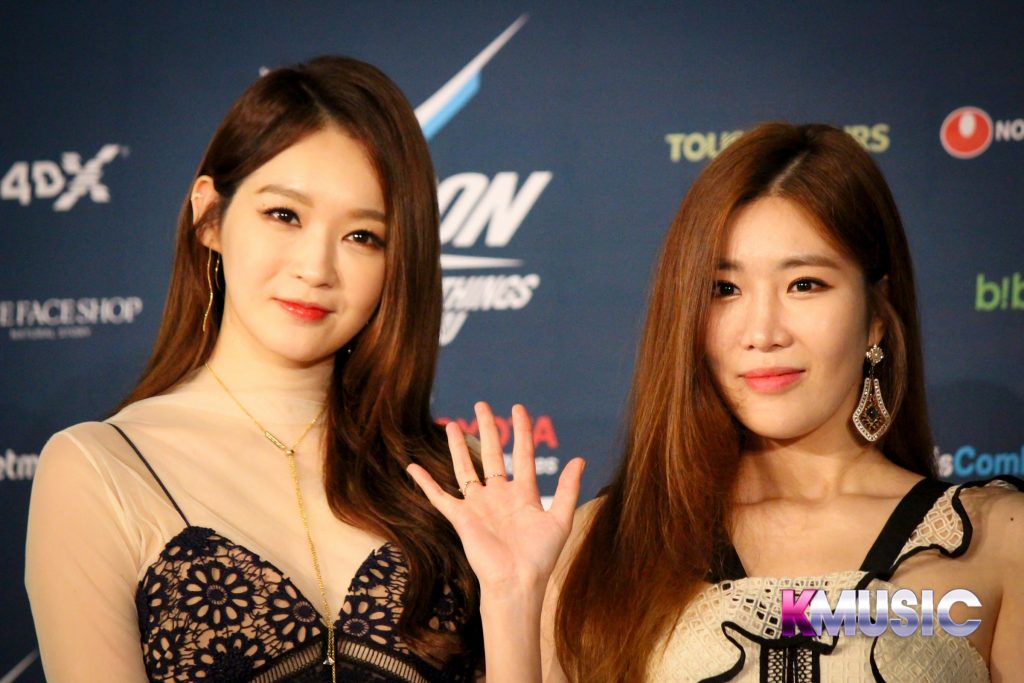 The next performance sent shivers down everyones spine as the powerhouse vocalists Davichi took center stage, performing their ballad from hit drama Decedents of the Sun, “This Love.” The crowd immediately recognized the song and sang along. They then introduced themselves and asked the crowd to help them out with their next song by singing “Baby Baby” to their hit dance track “8282.” The crowd happily cheered the chorus. Ending their set, the girls slowed it back down with their song “Don’t Say Goodbye” and fans waved their light sticks slowly to the melody. It was a truly amazing performance. 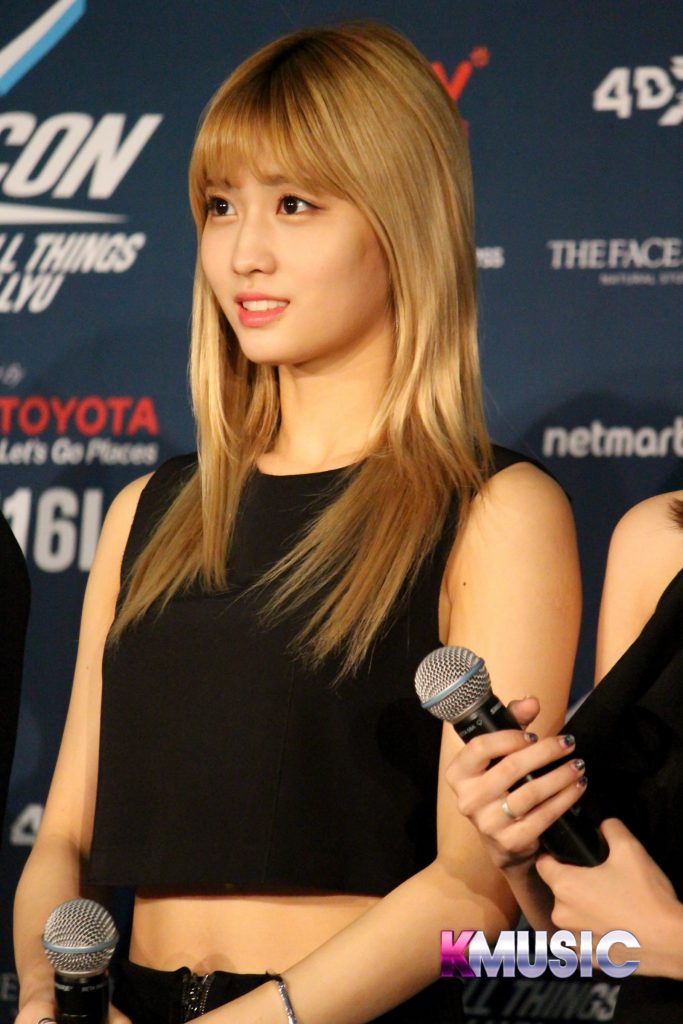 Gracing the KCON stage yet again with another treat was TWICE, dressed in all white suits, performing Bruno Mars, “Uptown Funk” and dancing along to the music. If that wasn’t enough of a treat, Monsta X claimed the stage yet again by showing off their “Moves like Jagger” in their very own rendition of the Maroon 5 song. 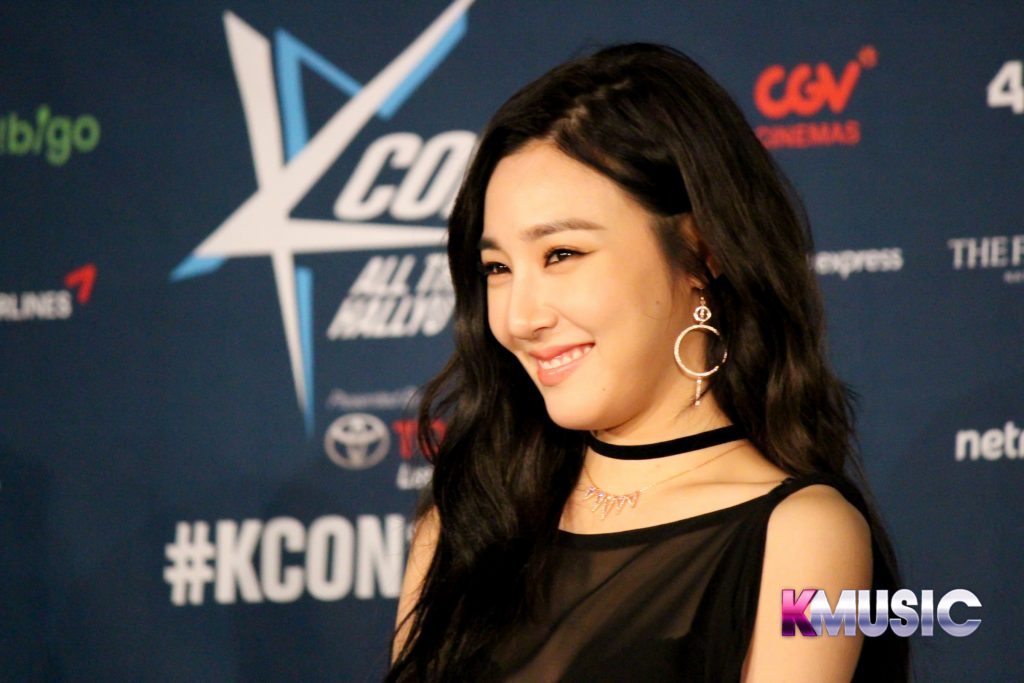 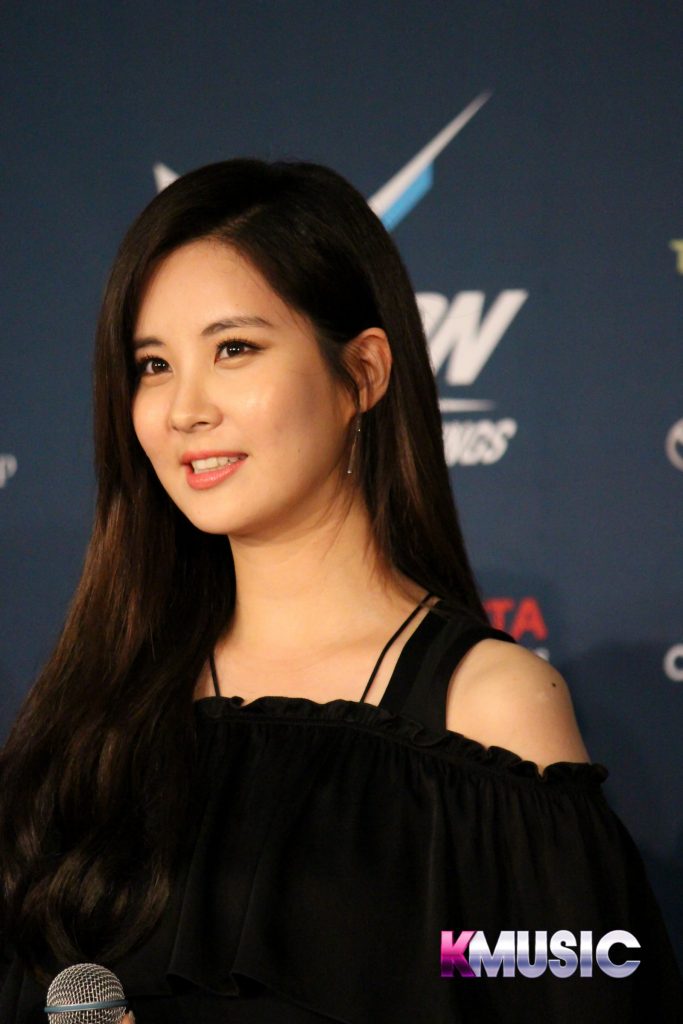 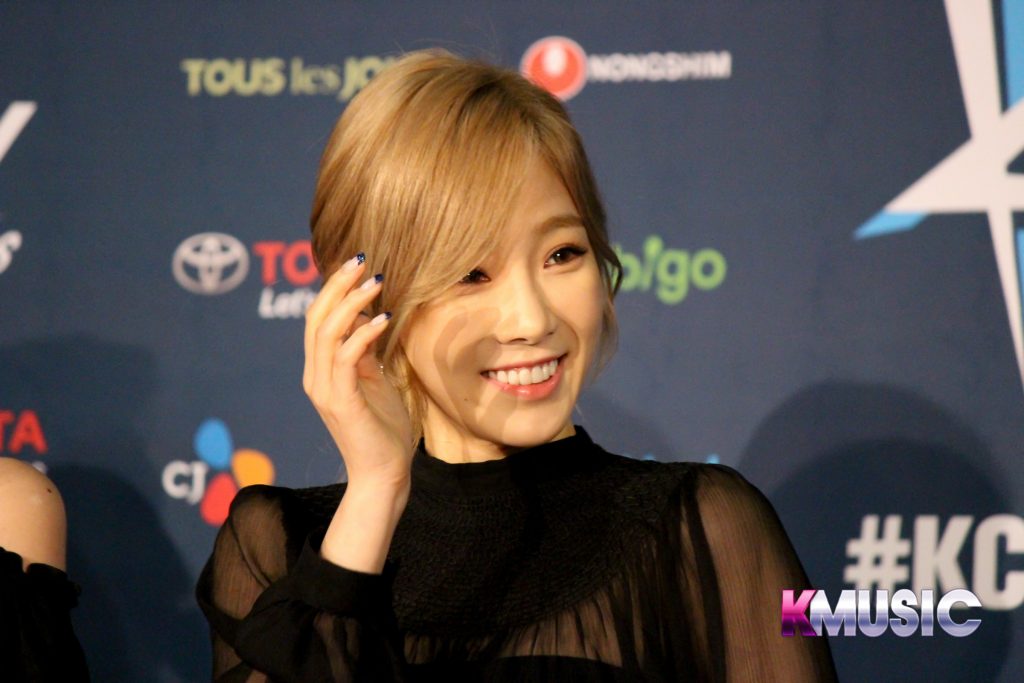 The moments Sones had been waiting for finally came after Monsta X and TWICE left the stage as TaeTiSeo appeared in shimmering red dresses to perform “Twinkle.” Their voices carried over all of the fans cheering and surged through everyone there. They then continued with their songs “Holler”, “Only You” and ended it with “Party.” They left such high energy that fans had trouble silencing after the performance.

Last, but certainly not least, the MC’s came to the stage announcing that there was but one more performance left, and of course, the crowd knew. Fans screamed, cheered, and many cried as the MC’s announced BTS to take the stage. 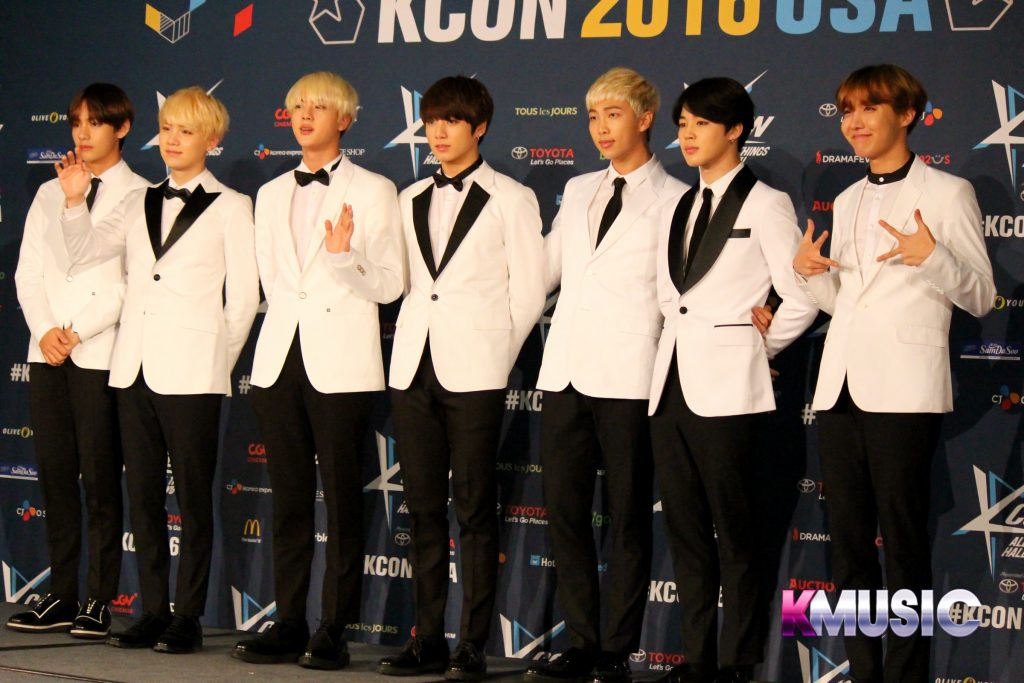 The lights dimmed, bringing down the stage lights to where we couldn’t see them on stage, but oh did we hear them singing. They began with “Forever Young” sending fans into a frenzy of tears of joy. They then lit the stage on “Fire” with their hit track and powerful dance skills. Fans couldn’t stop screaming. They stopped to introduce themselves, but everyone already knew and screamed as each member talked. Next up, proving they were no force to recon with, they performed their powerful rap cypher, “Cypher Part 3,” and got everyone bobbing. They closed the show with their powerful song “Dope” and left the crowd happily pleased at yet another amazing night at KCON. 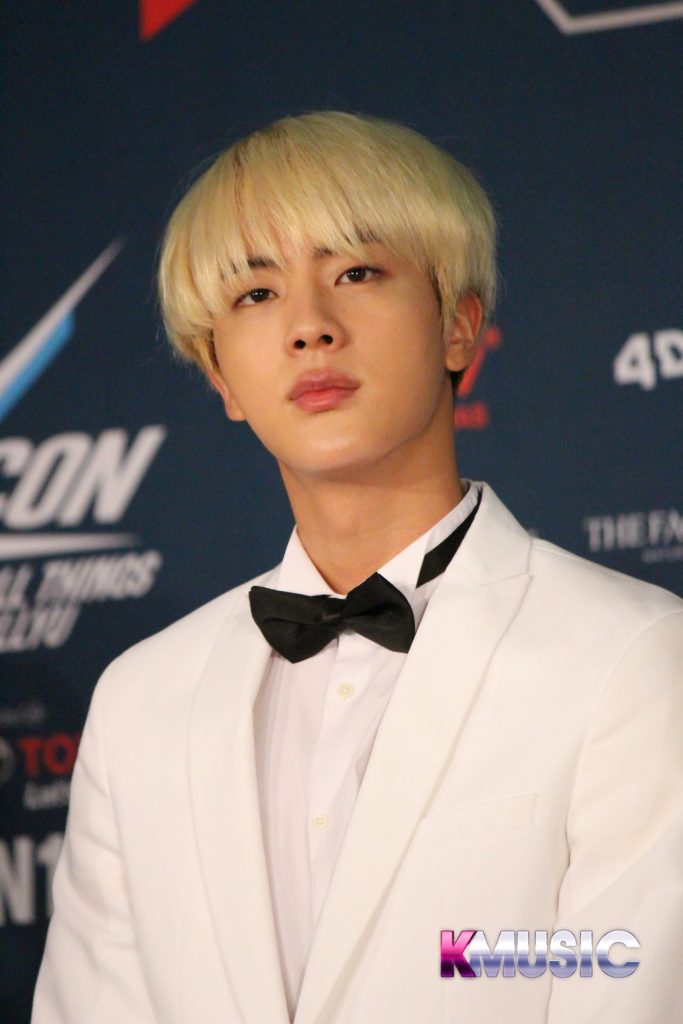 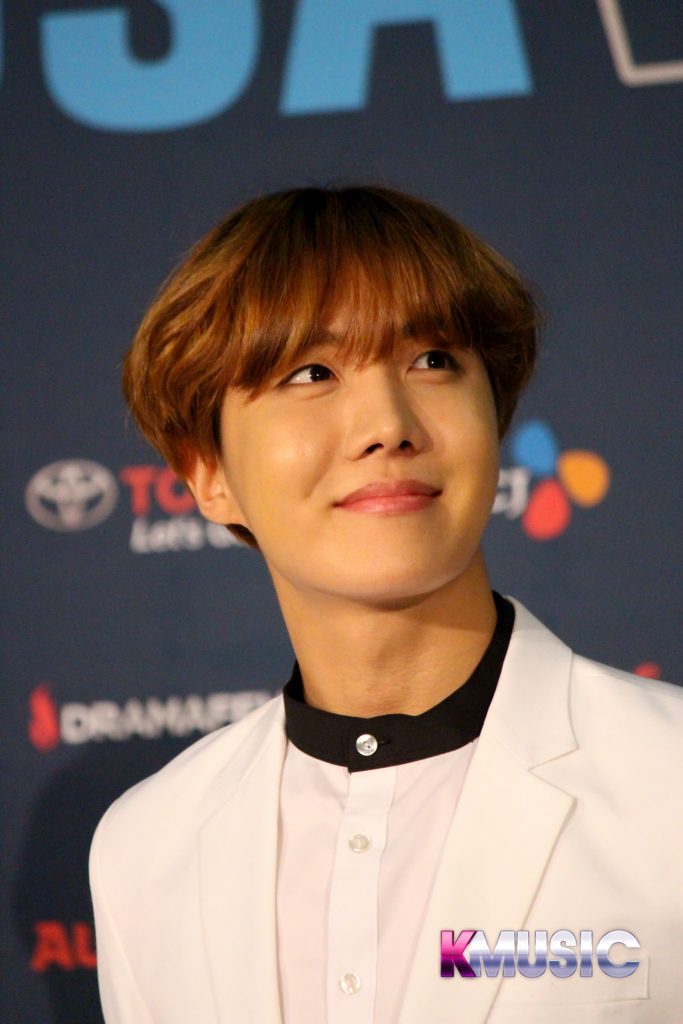 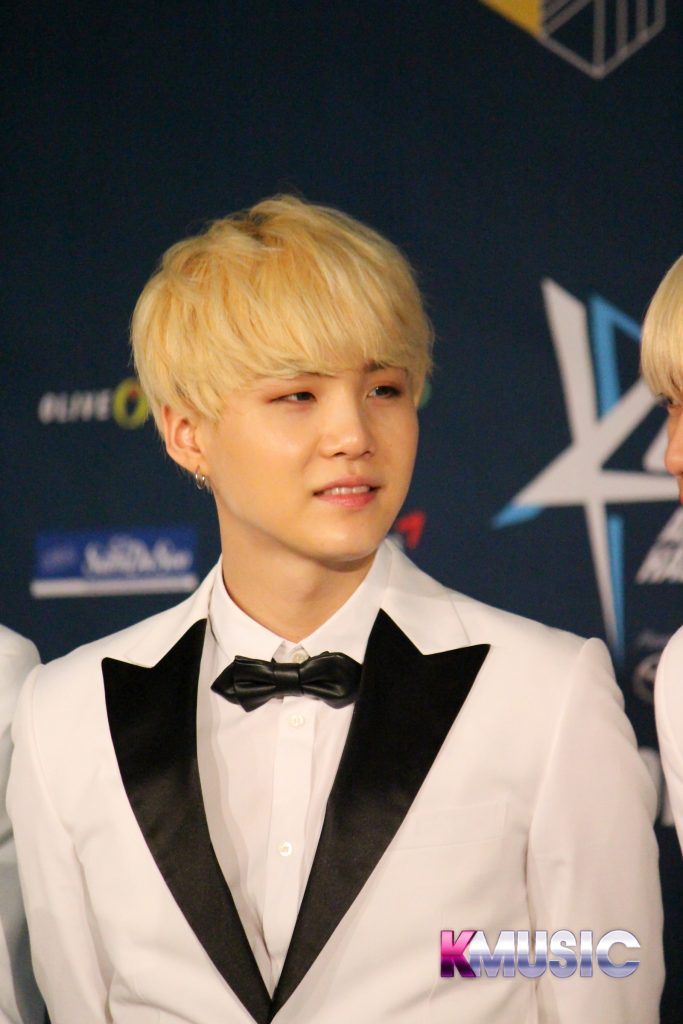 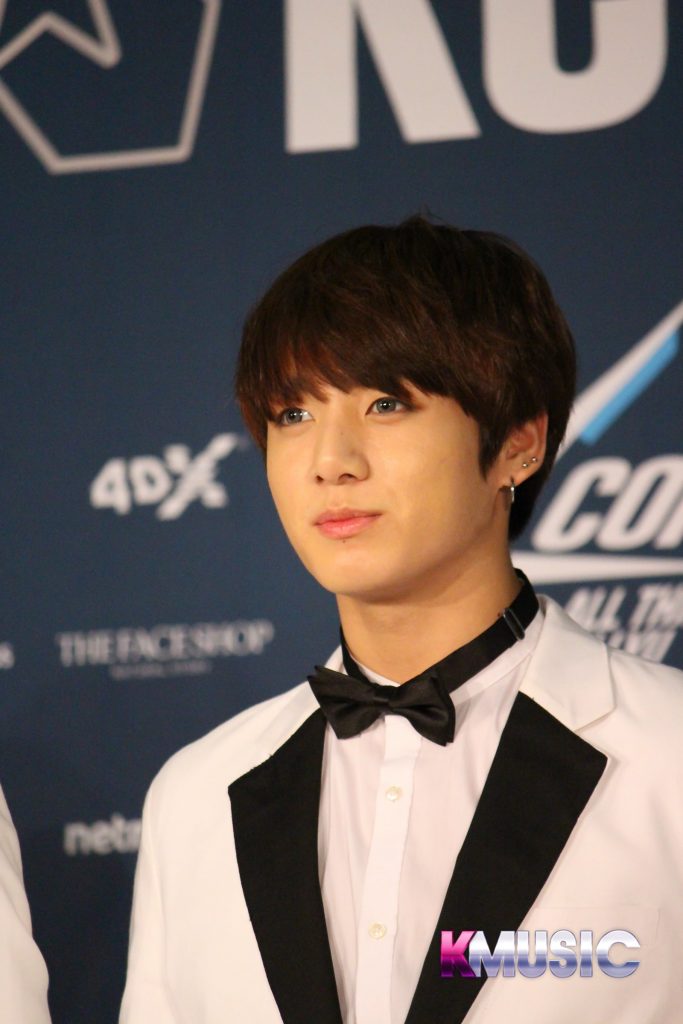 Sadly, the show was over but once again the KCON stage was filled with all of the performers from that night. They all waved as confetti filled the stage. As the artists took their final leave, BTS member Jung Kook got one final laugh out of the crowd by “dabbing” off of the stage.