Who the hell is Kwon Ji Yong? Before the ‘ACT III: MOTTE (Moment of Truth the End)‘ tour, Kwon Ji Yong was the forgotten true identity of G-Dragon, Korea’s household Korean Pop veteran.

The Korean superstar was last in Sydney for Big Bang‘s world tour with the entire group. But today he ran solo in the same arena they filled 2 years ago, in 2015. If there is one emotion that I can use to describe the show, it would be a sense of ‘happy-sorrow.’ At many times, Kwon Ji Yong‘s story is inspiring yet heartbreaking; ambitious yet confined; and yet it is always an honest tale.

With a chronological journey through ‘ACTS I‘, ‘II‘ and finally ‘III‘, G-Dragon has been on a long journey and we’ve been there every step of the way. His songs are cryptic as each era tells a different story, none more revealing then his latest album, Kwon Ji Yong.

From songs like ‘Heartbreaker‘ to ‘Crayon‘ and ‘Middle Fingers Up‘ in the latter half of the show, Kwon Ji Yong is no one-trick pony. Kwon Ji Yong is G-Dragon and G-Dragon is Kwon Ji Yong, but both are experiencing an identity crisis.

The opening act is morbid. A giant cacophony of cubes appears as the projector screen. Moving, shifting to the beat. A heartbeat sound consumes the Qudos Bank Arena as the screens turns a bloody red, revealing shots of the human anatomy. Fireworks follow… And a once active heartbeat flatlines.

“Make some noise” GD screams as he kicks things off with ‘Heartbreaker.’ Followed up by ‘Breathe‘, ‘A Boy‘, ‘Obsession‘ and it’s obvious that the theme here is one of romance gone wrong. It paints the picture of a younger man whose heart is consumed with love to the point of insanity. It’s a hint of maturity to come even if based on familiar themes.

In ‘Going Crazy,’ GD stepped things up. He wore a red fisherman’s net over his face with an intense dance break that we hadn’t seen in the songs before.

Then the shirt came off. Out popped his black singlet and you know what that means… Naked arms.

In ‘Rod‘, GD‘s band went wild with the guitarist – a man whose long, flailing hair was the MVP of the song. Besides Kwon Ji Yong, of course. In ‘That XX‘, GD pondered on a high platform with the moon in the background. Everyone’s phones captured the moment, while others let the music take over their body as they stared in awe of the Big Bang star.

Next came a personal favourite of mine, ‘Who You‘.

“I want you, I need you” he serenaded to the audience.

After ‘Black‘, GD sung ‘I love it‘ with a maroon suede jacket and nothing under. He laid down on stage, staring at the dancers bust out their moves. He too, occasionally broke out into disco moves for the groovy Michael Jackson vibe.

Next came a video of G-Dragon‘s friends and family. Daesung, Psy, Chaelin, Taeyang, Se7en, his mother and sister among many others spoke to how they viewed G-Dragon.

“Who is G-Dragon to you,” they were asked

“Who is Kwon Ji Yong,” was the next question.

Kwon Ji Yong is different from G-Dragon. He is happier, crazier, wilder, a good friend.

“Once he starts drinking he talks a lot,” Kwon Ji Yong‘s sister said.

In ‘Today‘, the setup boasted Kwon Ji Yong as director, with everyone clapping in the air to the beat. Then came ‘Crayon‘ and the crowd went pretty wild.

Happy-sorrow came to light in the next segment of ‘ACT III: MOTTE‘. It was a video interview of G-Dragon as he talked about his experiences and issues.

“I try to free up like G-Dragon but sometimes it feels heavy to me.”

As Kwon Ji Yong, he is afraid to take off the mask of G-Dragon. Will he still be shiny without the clothes and the red? He asks himself and yet only he has the answer. The crowd chants “Kwon Ji Yong” with love and support in his decision. None of us know if this is the last we’ll see of GD or Kwon Ji Yong, but as long as he does what he loves, his fans will be happy.

He played his most recent songs yet, from ‘Superstar‘ to ‘Middle Fingers Up‘ and ‘Bullsh*t‘. The crowd cheered, but there was an overriding sense of happy-sorrow, that is happy to hear the great music of GD, but a sense of sadness as to the lyrics. “I got nobody,” he sings. His latest album of rebellion, but mostly it is the story of a man in transition – unsure of who he is, what he should be and what he wants to be

With muffled screams of I love you, GD said “I love you too” and the girl screams ensued.

Followed up by the ‘OUTRO: Divina Commedia‘, Kwon Ji Yong appears his most honest and most mature. He laments over the mask he puts on as GD and whether that is truly him. With his final segment of the song, he stands atop a tall platform. Skies before him and clouds and the whole world beneath him. With a final bow, he says “Good afternoon, good evening and good night.” A door opens behind him and he walks through it.

Throwback to ‘Truman Show,’ the film which clearly inspired GD‘s exit. ‘Truman Show‘ too, followed Jim Carrey as he played a reality TV star whom also questioned his reality and whether his entire world was fake. Heavy stuff for the Korean pop superstar.

Before launching into his final song of the night, he waved to the fans.

With ‘Crooked‘ came thousands of fans singing along to one of GD‘s staple songs.

On that note, the night came to a close. Who knows when we’ll see Big Bang or GD again? With army conscription inbound and each member changing as a person, who GD was yesterday may be Kwon Ji Yong yesterday, but who knows what will happen months or years down the line. As fans, all we can do is support the musicians we love. Until next time, G-Dragon. 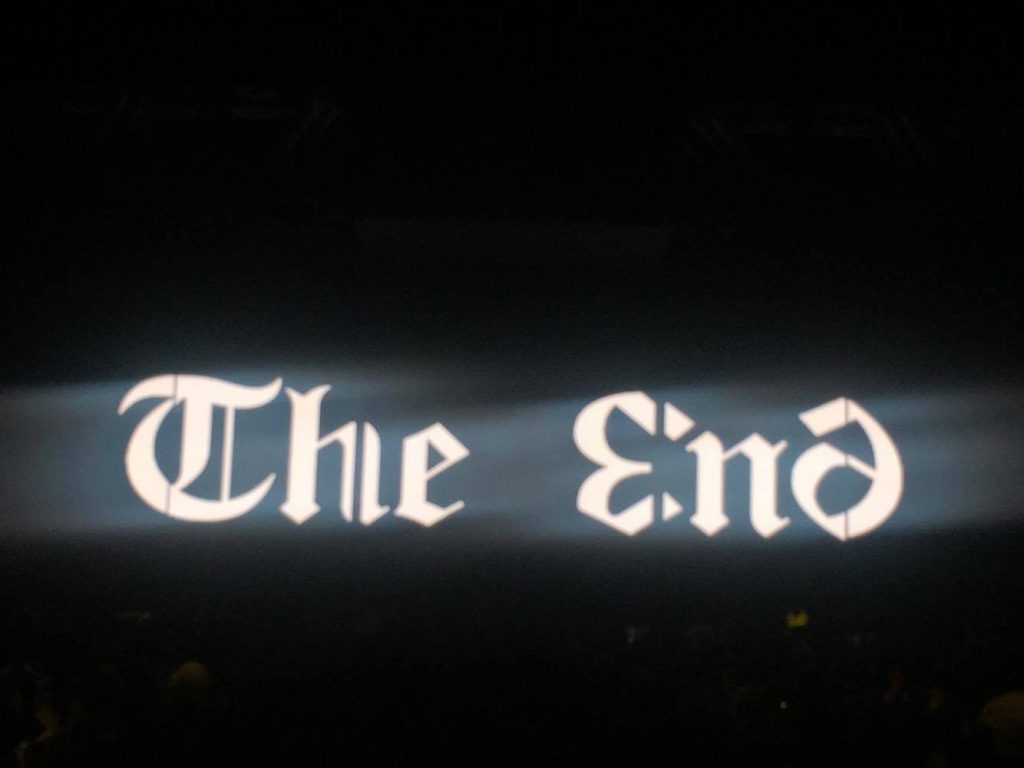 The G-Dragon ACT III: Motte World Tour in Sydney was brought to you by IME, Live Nation and YG Entertainment. The concert was held in Qudos Bank Arena, Sydney.