Excitement for the Atlanta stop for GOT7’s first US concert tour, “FLY IN USA”, began long before the concert with fans preparing signs and planning outfits, waiting at the airport for their arrival, and even spotting them at the Georgia Aquarium, the largest aquarium in the world. Temperatures reached up to 100°F as fans waited in line as early as 10:00am to enter the Cobb Energy Performing Arts Centre and the atmosphere buzzed with excitement and anticipation from the success of the previous stops in Dallas, Chicago, and New York. Once the doors opened, IGOT7 flooded into the building, rushing to pick up their merchandise and settling down into their seats. Even before the concert started, the concert hall was a sea of green, filled with official, concert, and even dollar tree light sticks. 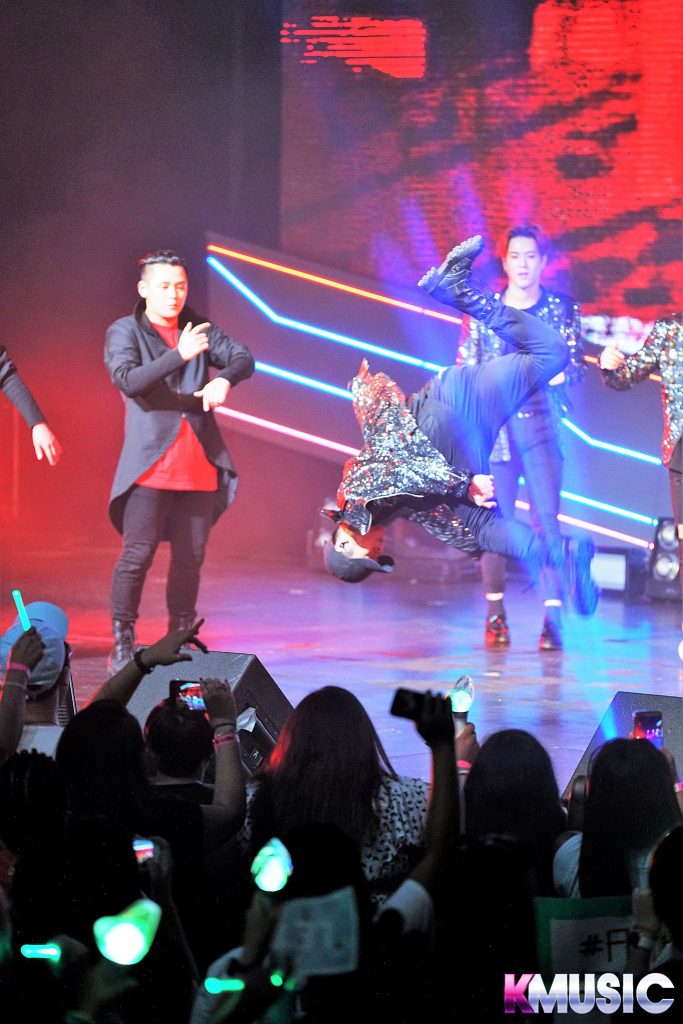 7:30pm arrived and the audience began chanting “GOT7” over and over again until the moment the intro VCR began. When the members approached the stage and “Put Your Hands Up” blasted through the speakers, fans began to go wild and many were already jumping out of their seats from GOT7’s explosive energy. GOT7 continued to escalate the intensity with their next song “Turn Up the Music” and then their debut song “Girls Girls Girls” which had fans chanting along to the well-known chorus.

After the first three songs, BamBam greeted the fans with a cheerful “What’s up, Atlanta?” and the concert hall erupted in cheers and screams. The rest of the members said a few introductory words and then Mark ended the short talk with, “I don’t think we should stop yet, I think we should keep going. Atlanta you want some more?” leading to their next set of songs. They performed “Back to Me” and “Magnetic” with just as much energy as the first three songs. 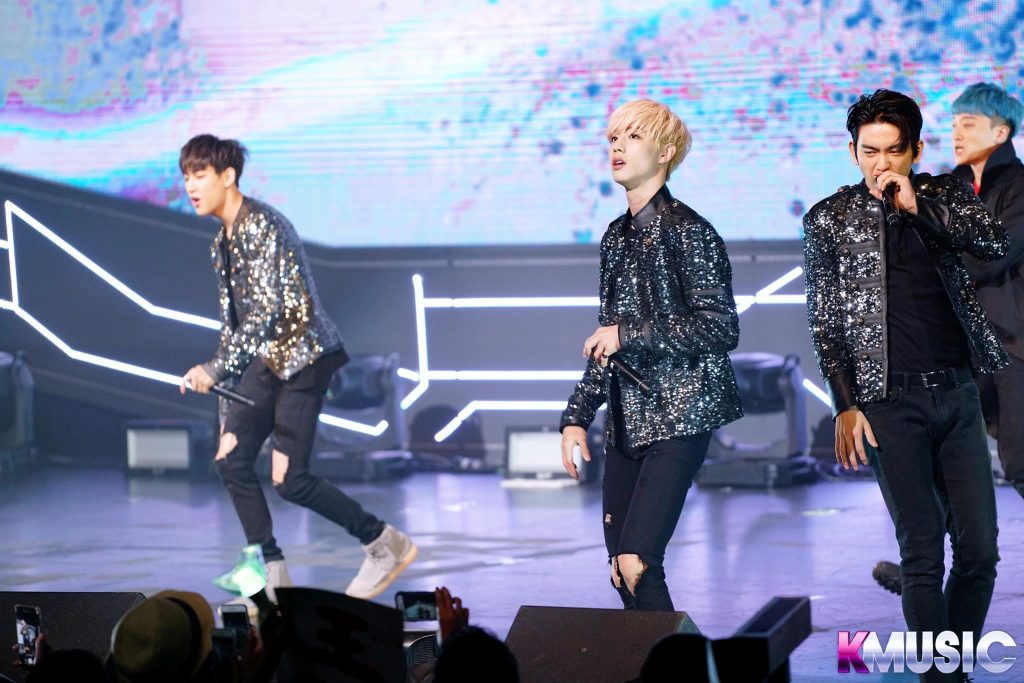 GOT7 then individually introduced themselves and expressed their newfound love of Atlanta, mentioning the chicken waffle and the Georgia Aquarium (and Dory and Nemo). Mark even mentioned how ridiculously hot it is in Atlanta only to be interrupted by BamBam’s exclamation, “The people is way too hot, baby!” resulting in another outburst of cheers. They continued to convey their everlasting love and passion for their IGOT7’s support. GOT7 then ended their introduction with “This Star”, “Playground”, “Can’t”, and “I Like You”.

Next came GOT7’s special stages. Prior to each sub-unit’s performance, it was highlighted with a VCR featuring the members in the sub-unit. The first duo was comprised of JB and Youngjae. JB sat in front of a microphone while Youngjae was seated at a pristine white piano which he played for the opening of the song. The duo wooed the audience with their vocals and piano skills, singing “1:31am”, a calming and beautiful ballad. The next subunit was made up of Junior and Mark. The two performed an upbeat song, “Higher”, and took on a more cheerful concept with pink and blue suits, upbeat choreography and colorful streamers to end the song. The finale trio featured Jackson, Yugyeom, and BamBam. Their performance adorned the stage with three large thrones as they performed “Love It” and “WOLO”, skillfully combining hard hitting dance moves, rap and vocals together. Finally, all seven members came back together to perform their latest comeback, “Fly”. 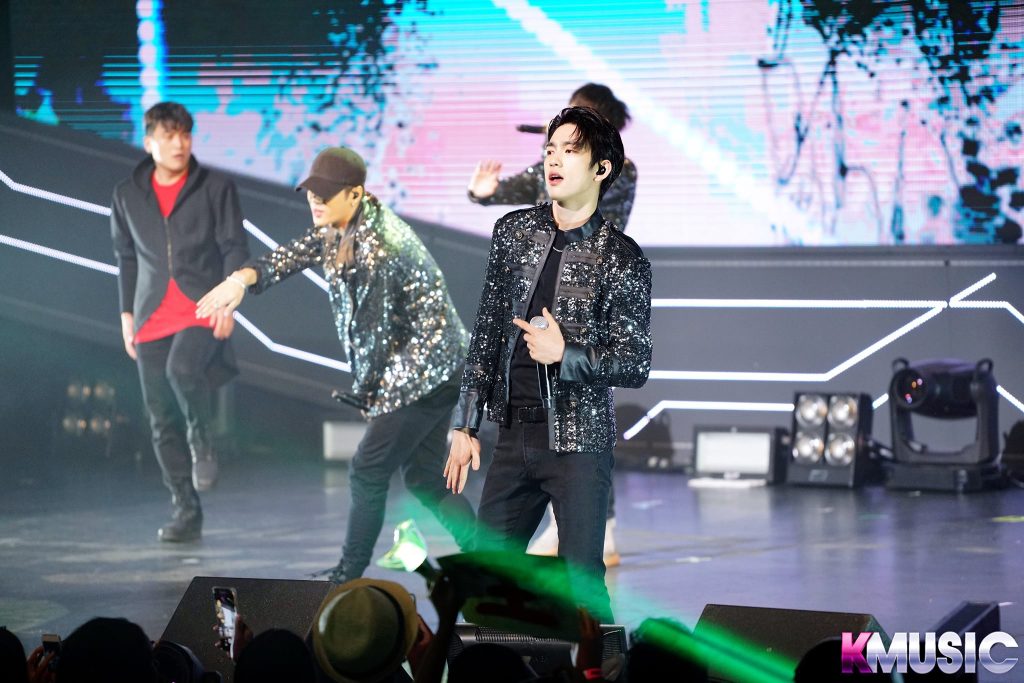 The seven members took a break from their passionate performing to connect with the fans and explain each sub-unit’s song and concept where they joked that JB and Youngjae’s unit was the ballad unit, Mark and Junior’s unit was the fun unit, and Jackson, Yugyeom, and Bambam’s unit were the “swag” unit. They also explained the meaning behind of each of the song’s titles as well. “1:31am” was written by JB and Youngjae at 1:31 in the morning while they were in Japan. Mark and Junior named their song because they wanted a high energy song to take fans “higher” with them. “WOLO” is a play on the infamous “YOLO” and stands for “We Only Live Once” and the members teased that it was different than “YOLO” because of copyright reasons. The boys continued to excite the fans with short acapellas of their unique songs as well as the highlight points of the choreographies. To wrap up the talk BamBam refused to mention the next song, instead telling all the fans to sing and dance along.

GOT7 then performed “Homerun”, “See the Light”, and “Just Right” and the entire concert hall was brimming with excitement. Many fans sang along, danced along, and waved their green light sticks to the beat. Even after the three songs, GOT7 continued to tease the fans and lifted up BamBam’s shirt to reveal another shirt underneath. Each member took turns explaining who produced what song and coerced a member to perform point choreographies from those three songs which often resulted in screams and applause from the audience. To take fan interactions to the next level, Mark asked the audience if anyone knew how to beatbox so Jackson could perform the point choreograph for “Fly”, and although slightly hesitant, the members fully supported the fan. Then they all spoke with a hint of sadness in their voices when they made Mark announce the bad news that the next part of the concert would be the last, and the entire amphitheater was filled with exclamations of dysphoria. Youngjae then turned the mood around by making a pun with their next song by saying, “I wanna ‘Rewind’!” 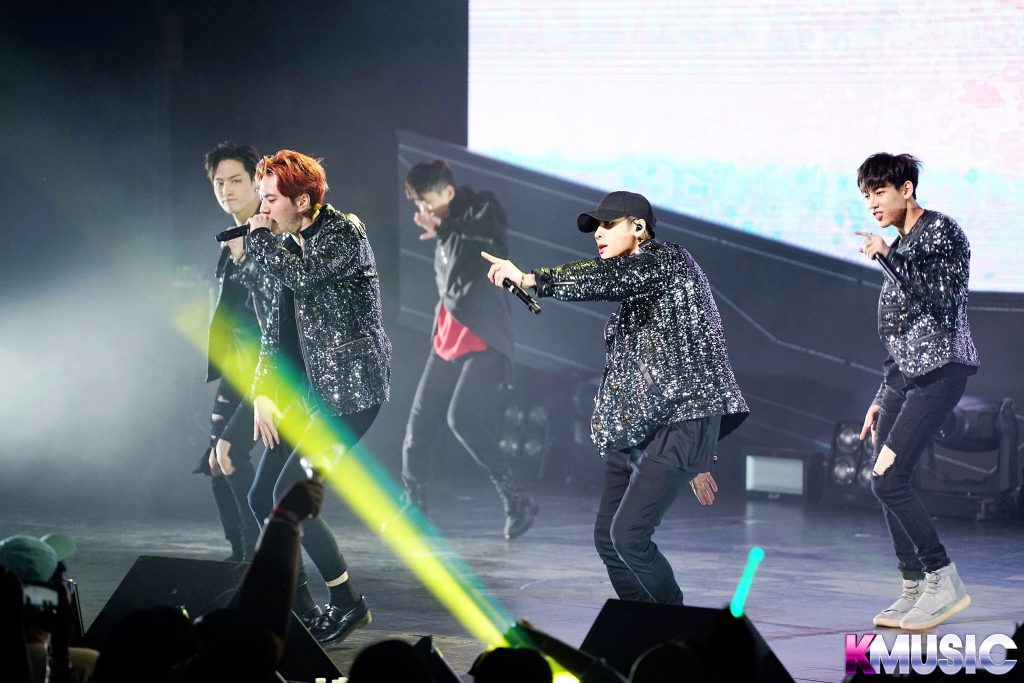 GOT7 then performed their hits, “Rewind”, “Stop Stop It”, and “If You Do” prompting an ecstatic crowd despite the end of the concert nearing. Then the seven members cleared the stage as fans chanted their names in an effort to call them back out. The screen flickered on to display a fan interaction roulette dance mission, where three fans were chosen randomly to dance to “Stop Stop It”, “Home Run”, and “Just Right”, respectively. Once the mission was completed, “Confession Song” began playing and all seven members began to make their way through the aisles on the first floor giving high-fives to the fans and wrapped up with “Everyday”.

GOT7 began their final talk with BamBam blurting out, “Oh my god my voice gone already!”. Then each member said their final thanks to wrap up the concert. 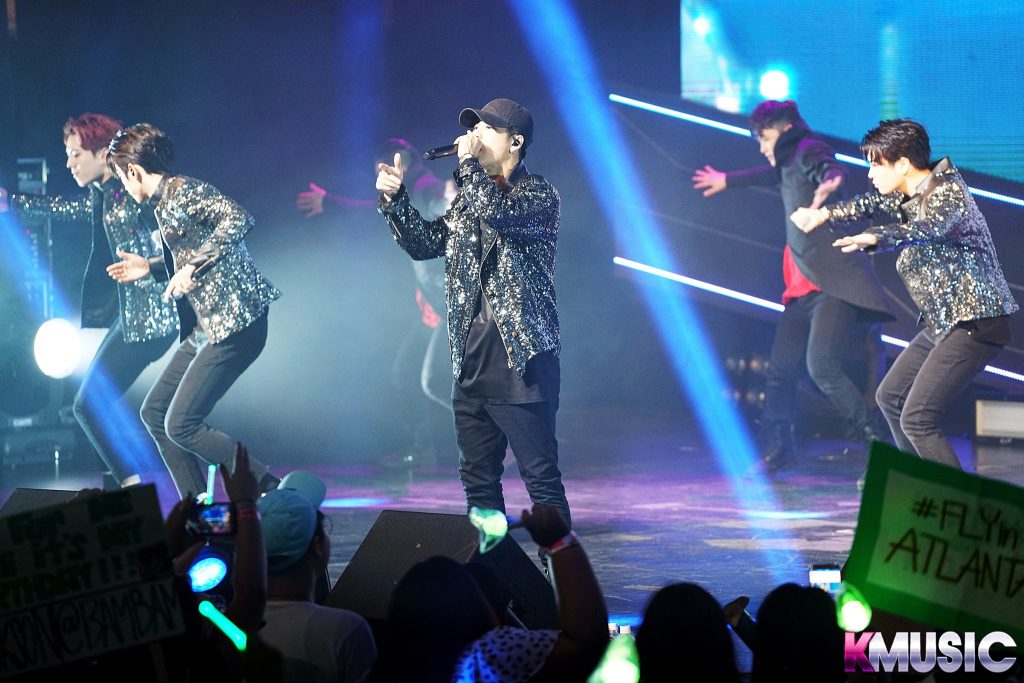 Yugyeom and Youngjae expressed their happiness and gratitude in simple but near perfect English, showing the hard work they had put into practicing the foreign language to be able to communicate with fans; leader JB even said a few words as well, prompting BamBam to let fans know that this was the first time JB had given his thanks in English during the tour. JB would finish sharing his gratitude in Korean with assistance from the translator but there was no sincerity lost in his words from the language barrier as he promised fans that they would return. Mark, Jackson and BamBam all spoke of their surprise about the passion that Atlanta displayed during the concert and remarked that Atlanta fans had been the loudest on the tour so far, which led to fans again showing off their vocal power in cheers for the members. Mark went on to thank fans for coming out and made a promise with IGOT7s that GOT7 would come out with even better songs. BamBam said that he would return to Atlanta, maybe for a vacation, and Jackson joked that fans should write down their addresses on the way out of the venue so that they could visit. All joking aside, BamBam and Jackson made every single fan in the venue feel special by encouraging them to never let negative energy get them down, be proud of themselves and believe that they are perfect just the way they are, along promises to BamBam to never stop dabbing, of course! Junior made fans’ hearts flutter even more by saying that while there were so many beautiful fish at the aquarium that morning, there were so many more beautiful IGOT7 at the concert. He encouraged fans to promise never to forget GOT7 and finished with a playful, “Don’t look at anybody, any artist. Only GOT7, okay?” 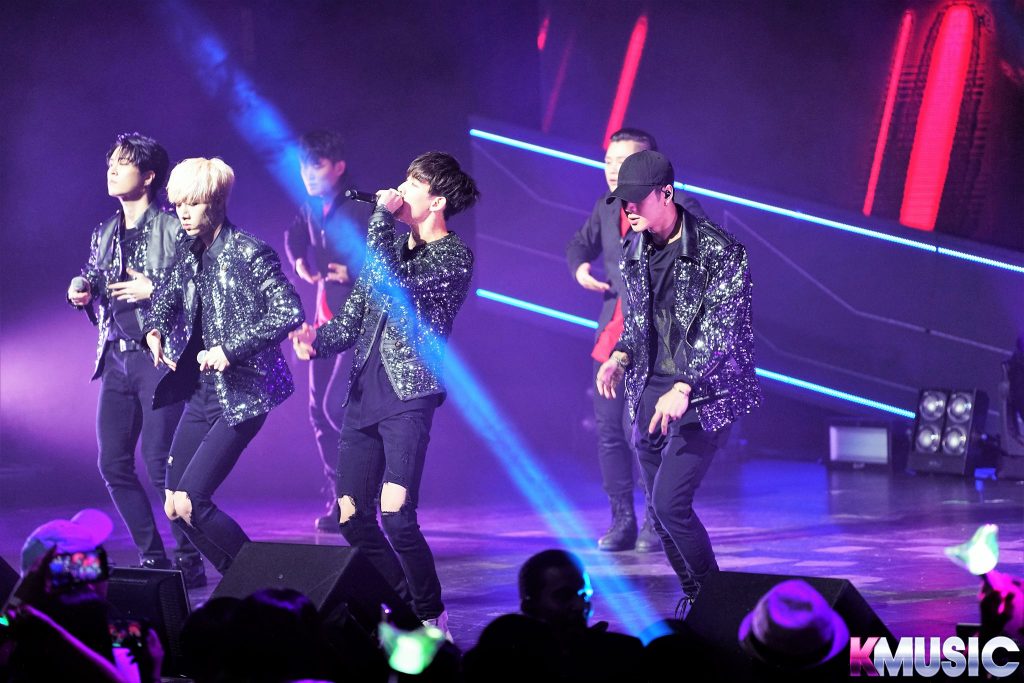 At the conclusion of the members’ short speeches, Mark suggested the members and the fans should take a group photo together. Two photos were taken, one normal picture and, of course, one picture with everyone dabbing. Just when the fans thought the concert was going to be over, they surprised IGOT7 with four final songs, “Follow Me”, “Bounce”, “Fly (remix)” and “Before the Moon Rises”. Throughout the encore, all seven members ran around the stage and took selfies and videos with fans’ phone cameras. Once the songs ended, they thanked all of the fans, their dancers and the staff team who helped make the concert a success and did one final “We are GOT7” in Korean before leaving the stage. But a GOT7 concert is not complete without some last minute fanservice from BamBam and Jackson flashing their abs followed by BamBam and Junior running across the stage while they dabbed.

GOT7 had certainly exceeded expectations in levels of vocals, dance, rap, and fan service and fans will definitely be experiencing post-concert depression after this electrifying concert. Fans can look forward to GOT7’s return to Atlanta in the future and their upcoming music releases.

Stay tuned to Officially Kmusic for all your exclusive KPOP coverage. Huge thank you to SubKulture Entertainment, JYP Entertainment and GOT7.