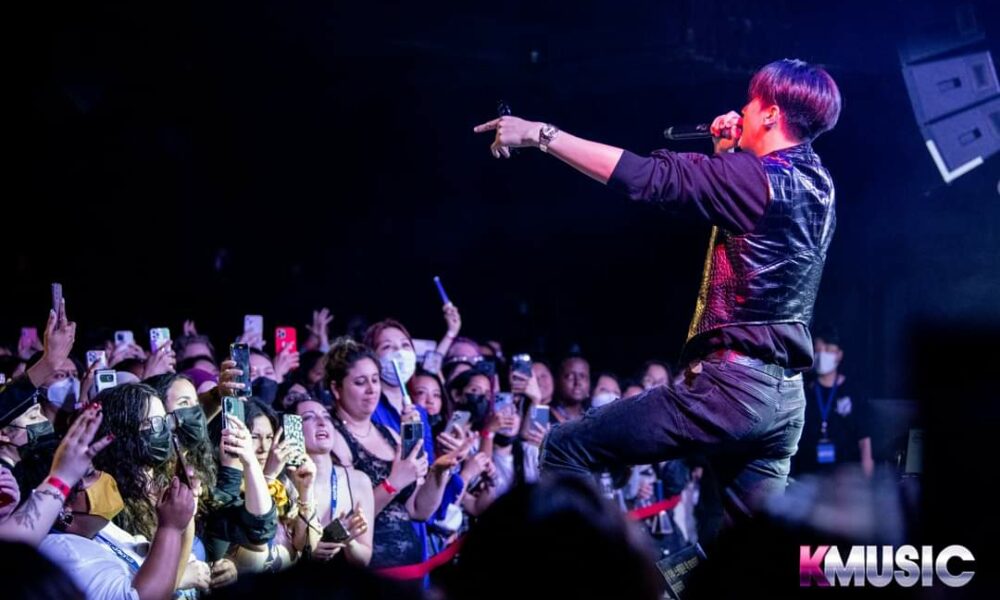 In the capital of hustle-n-bustle, New York City, fans gathered inside the intimate Le Poisson Rouge on May 14th to witness the inaugural performance of GROOVL1N during their first official U.S. tour.

The devoted fans, who had been waiting since before the original tour dates in March were postponed, now only had a short wait under the drizzling rain in a line that stretched down the block. The weather outside wasn’t enough to dampen the crowd’s spirits as the doors opened.

To kick off the night, GROOVL1N’s 28 year old singer Xydo took the stage. “We’re finally here, right?!” He led his set by wooing the crowd with “Drawing,” “Me without you,” and “Spotlight.” Xydo shared with his fans that he was a bit nervous, but his smiles showed his excitement to be performing in the United States for the first time, and with such an engaged audience.He continued on with hits “Paradigm” and “Hollow.” He asked the crowd what the next song should be, and as if in unison, shouts screamed out for “#OOTD.” Xydo rewarded them by jumping into the song as the crowd sang along. His solo stage for the night ended with energetic performances of “Free” and “BETTING,” which led off to Mr. CEO himself taking the stage.

Xydo’s charming shyness quickly gave way to RAVI’s commanding stage presence. Now in his 10th year of stage experience, he was ready to leave the audience with a show they wouldn’t forget. The crowd was going crazy over his rapid-fire rapping to songs from his 2022 album “Love & Fight.” The bar was set high, but RAVI cleared it with his latest single “Who we are.” From water being sprayed over the crowd, to the epic lightshow, to the rapper jumping all over and seemingly running laps on the stage, he had the venue on fire. Fans toward the front of the stage greeted him with roses during his songs “Flower Garden” and “Roses.”

Xydo joined RAVI on stage to perform fan favorites “#OOTD,” “Mint Chocolate,” and “Tuxedo.” The artists continued dancing on stage and having fun with the audience. At one point, a loving fan gave Xydo an American flag with “Welcome to NYC” and the loving words from his fans written on it. He draped himself in the gift through the rest of his songs. The duo wrapped up the night by taking a photo with the audience, whom were lit brightly by the venue lights. As they waved and said their goodbyes, the crowd waved and chanted their love for the artists. This show was one to remember.

Special thank you to GROOVL1N and Studio PAV for allowing Officially Kmusic to attend, and make sure to head to our Facebook page here for photos from the show!

Scroll for more
Tap
KPOP.FLEX: Back in 2023 to London and Frankfurt
[K-Exclusive]: GROOVL1N’s Memorable Show in Chicago
Scroll
Loading Comments...