K-EXCLUSIVE: iKON ‘Continue’ to wow fans in Melbourne concert while in Australia

K-EXCLUSIVE: iKON ‘Continue’ to wow fans in Melbourne concert while in Australia

On October 27th, iKON performed at Festival Hall in Melbourne to a crowd of 1700+ fans. Melbourne was the last stop on their ‘2018 Continue Tour‘. After putting on an amazing show in Sydney on October 25th, fans in Melbourne were eagerly waiting for their arrival. Prior to the night, there were already long queues around the venue and in front of the doors. Their fans are definitely dedicated. Lucky fans who were randomly selected from VIP ticket holders also got to enjoy watching soundcheck hours before the concert, in which the group performed three songs.

When the doors finally opened, fans were excited to finally enter the venue. On the screen on either side of the stage, many of iKON‘s MVs were playing. For example, their biggest hits like ‘Love Scenario‘ and ‘Killing Me‘ played, as well as ‘#WYD‘ and ‘Bling Bling‘. This definitely got fans even more hyped up for their concerts. When the MVs were playing, fans kept on screaming when they say their biases popped up on screen. 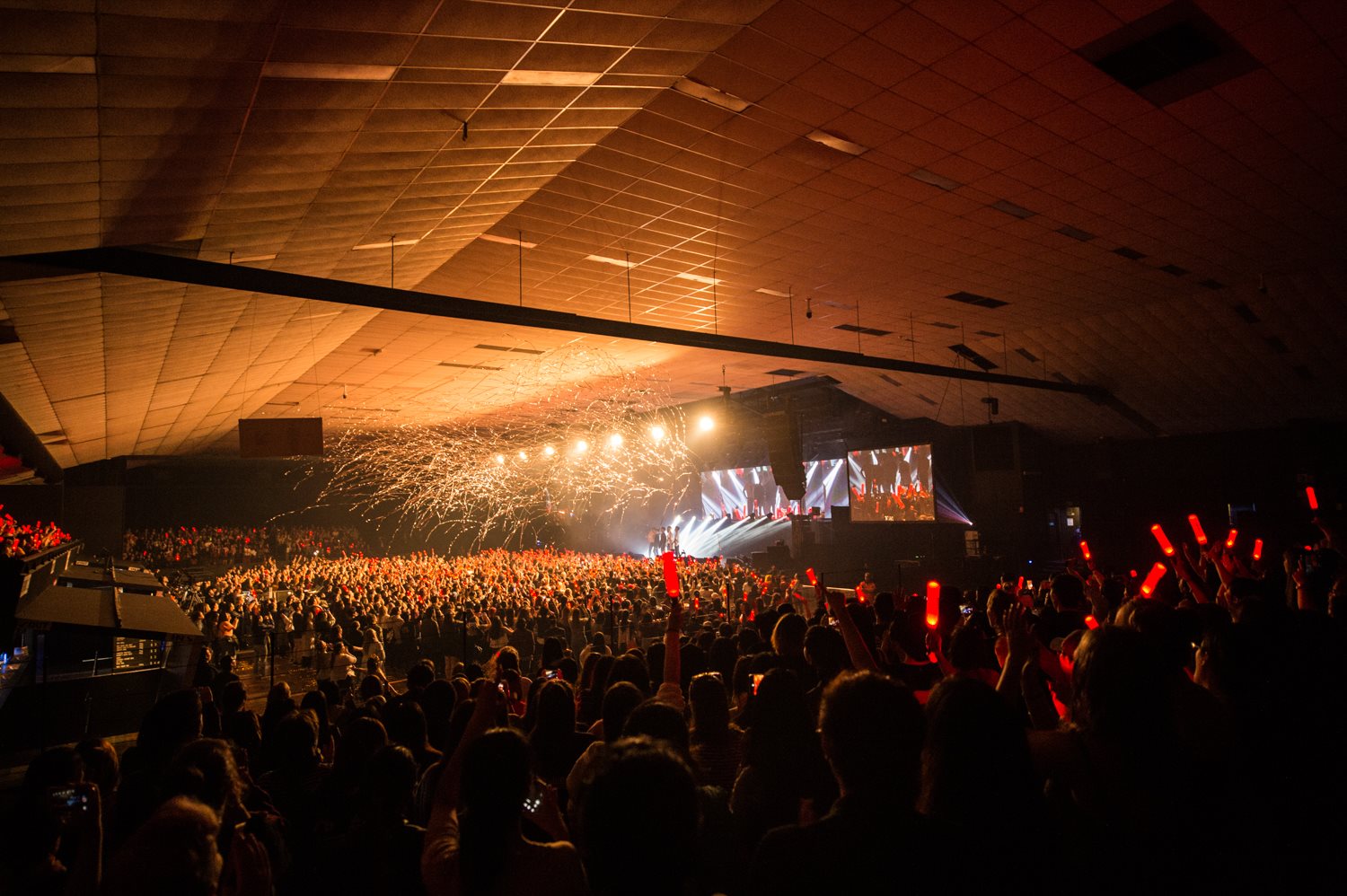 When the music became louder and the lights dimmed, fans started screaming as they knew that the concert was finally starting. An introduction VCR was played on the screen on stage, in which all the members were introduced to the crowd. Soon enough, the whole group appeared elevated on stage in a row. They looked majestic in sparkly red shirts. The concert kicked off with a performance of ‘Bling Bling‘. The background were images of luxury goods, which matched the theme of the song. Bobby made the crowd even more excited by asking fans to chant “Hey iKON!” after the song finished. iKON definitely made the atmosphere have high energy by performing ‘Sinosijak‘ and ‘Rhythm Ta‘ next.

The group made their introductions next. They greeted their Melbourne fans in English and introduced themselves. In the background, an instrumental version of ‘Best Friend‘ played. Since this is a sentimental song, the atmosphere became more intimate. iKON talked about what they had done in Melbourne so far, including their Hosier Lane experience. About a week before the concert, a few dedicated iKONICs made a mural for the group at Hosier Lane. The group visited this site on the night before the concert, and the members posted about it on their SNS.

They applauded their mural in Hosier Lane. Furthermore, Bobby and the other members talked about how they wanted to drink at Yarra River, but the bars were closed. This made the audience laugh as the group experienced a culture shock since everything closes early in Melbourne.

For the next few stages, the stage concept was very appropriate for Melbourne. They performed their songs ‘Cocktail‘ and ‘Only You‘ from ‘New Kids: Continue‘. Since these songs are upbeat, they had a summer theme. This suited Melbourne, since Australia is approaching summer soon. The background screens showed a beach and tropical party.

Before they performed more songs, Bobby and B.I decided to have some fun with the audience. They played a game in which they divided the audience into two teams. Bobby‘s team was the left side, and B.I‘s was the right side. The game was whoever would sing ‘Love Scenario‘ the loudest would win. Bobby and B.I conducted the audience in singing, and they took turns. The crowd was deafening, which just shows how dedicated they are. In the end, they could not decide the winners, so they settled for a game of rock paper scissors instead. B.I ended up winning, so Bobby had to do push-ups as a punishment.

A VCR played in which each vocalist sang their part of ‘Perfect‘. It showed each vocalist singing individually and walking around a stadium that they performed in. The end of the VCR showed a stage on screen, which led them coming onto the stage in real life. For this performance of ‘Perfect‘, the five members stood at different parts of the stage so that the audience could see them clearly. June was impressive as he hit many high notes. The fans were blessed with DK wearing glasses as well. After this emotional performance, the atmosphere did a 360 as the rappers performed their solo songs. B.I emerged sitting on a throne at the top of a stage. He definitely looked like royalty. He performed his solo song ‘One and Only‘, and the whole audience sang along with him. Soon after, Bobby sang ‘HOLUP!‘. While the audience was singing along, Bobby kept spraying water into the crowd, which made them even more energised.

With high energy, the group performed ‘Anthem‘ next. Bobby and B.I started it, while the rest of the group joined them later during the song. The whole crowd was singing along to “iKON is coming to town!“. During their performance of ‘B-day‘, streamers shot out into the crowd.

Next, a VCR of iKON played, which showed the members all enjoying their time together. Sentimental instrumental music played in the background. The group came back out on stage dressed in more casual clothes. They sang their debut song ‘My Type‘ sitting down, which made the performance more intimate. It looked like they wanted to connect more with the crowd. During the part where B.I sings “Oh girl you know that I love you“, Jay changed it and made a pun instead. He said “I thought love started with ‘L’, but why does mine start with ‘U’?“. This instantly melted hearts in the audience. They then performed ‘Rubber Band‘.

iKON proceeded to entertain the audience. DK did the ‘Fortnite‘ dance, and Bobby and DK took turns twerking. There was also a special announcement, in which Bobby announced that he just became an uncle as his nephew was born. They also talked about what they have accomplished this year. Jay prepared his sexy voice and sang. However, Bobby and DK started imitating his voice, which was absolutely hilarious. Bobby, Jay and DK even sang snippets of the English song ‘Dive In‘ by Trey Songz. The group also dared June to show his abs, and the audience was especially pleased about this. To introduce their next song, each member stated who their best friend was in the group. Leader B.I was left alone, but he said that he had iKONICs. This led to their performances of ‘Best Friend‘ and later ‘Everything‘. For ‘Best Friend‘, the group coupled up into duos to perform their choreography. B.I surprised everyone by showing up in a cute duck onesie. 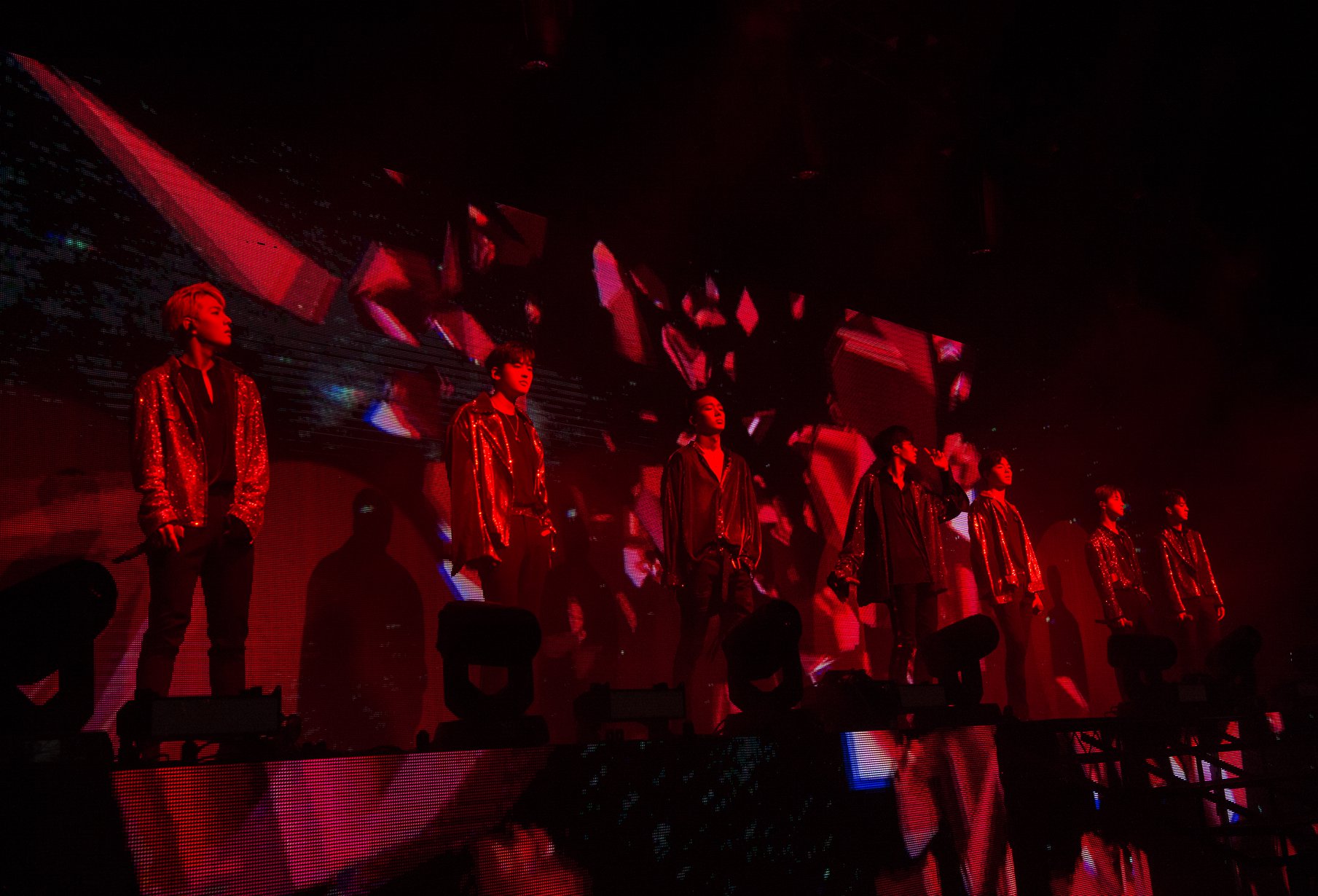 The next VCR showcased iKON‘s achievements and music show wins. It showed kids covering ‘Love Scenario‘, their most successful song to date. This led to their own performance of the song. For the next song ‘Goodbye Road‘, there was a shift as there was a more solemn mood since we were approaching the end of the concert. Jay also individually showed off the choreography for ‘Goodbye Road‘. The group started thanking fans and asked for energy from the audience for the encore. During ‘Killing Me‘, iKONICs started doing the fan chants. For the last song ‘Freedom‘ before the encore, B.I got the crowd excited by singing a few lines from the song. Since this song has a rock style, the group were jamming out on stage.

For the encore, iKON sang ‘Just For You‘ while sitting on stage with mic stands and wearing their tour merchandise. They also playfully sang their own rendition of Wiz Khalifa and Charlie Puth‘s ‘See You Again‘. The group performed ‘Love Scenario‘ again; however, the audience was doing most of the singing this time. Lastly, they performed ‘Don’t Let Me Know‘, ‘Dumb and Dumber‘ and ‘Freedom‘ again. The venue had more of a club atmosphere towards the end, especially during ‘Dumb and Dumber‘. ‘Freedom‘ was the perfect song to end the concert with, since it provides closure. When iKON was saying goodbye, fans were sad to see them leave the stage.

iKON‘s concert in Melbourne was definitely a memorable one, especially as a conclusion to the ‘2018 Continue Tour‘ in Australia. iKONICs are already excited for their return!

Special thanks to Award Entertainment Global and YG Entertainment for giving Officially Kmusic the opportunity to cover this amazing event!

What did you think of iKON‘s concert in Melbourne? Let us know in the comments below.