On September 4th, of 2016, Prince Mak attended “Sydney, Cabramatta Moonfest” as an MC and a performer. Not only did we just cover the event, our team at KMUSIC were given the chance to interview Prince Mak after his performance.

If you missed the show, here’s what happened: After introducing himself, Prince Mak performed Rhythm Ta by Ikon where he entertained the audience with his amazing vocal and dance skills. He then proceeded to play a fun game with the audience as he picked and chose 8 people to come up onto the stage to play a balloon popping game. In this game two people are paired up and must hug each other to pop the balloon, and the first team to pop a total of 8 balloons win. Once the winners were distinguished, he gave the three girls and one gentleman a white rose. The winners got to be “models” for his performance of Boyfriend by Justin Bieber where he held their hands and captured everyone’s hearts, while walking the winners around the stage. The winners also, later scored some signed JJCC albums. Finally, he did an interview with host Natalie from POPASIA before doing a meet and greet with his many fans. 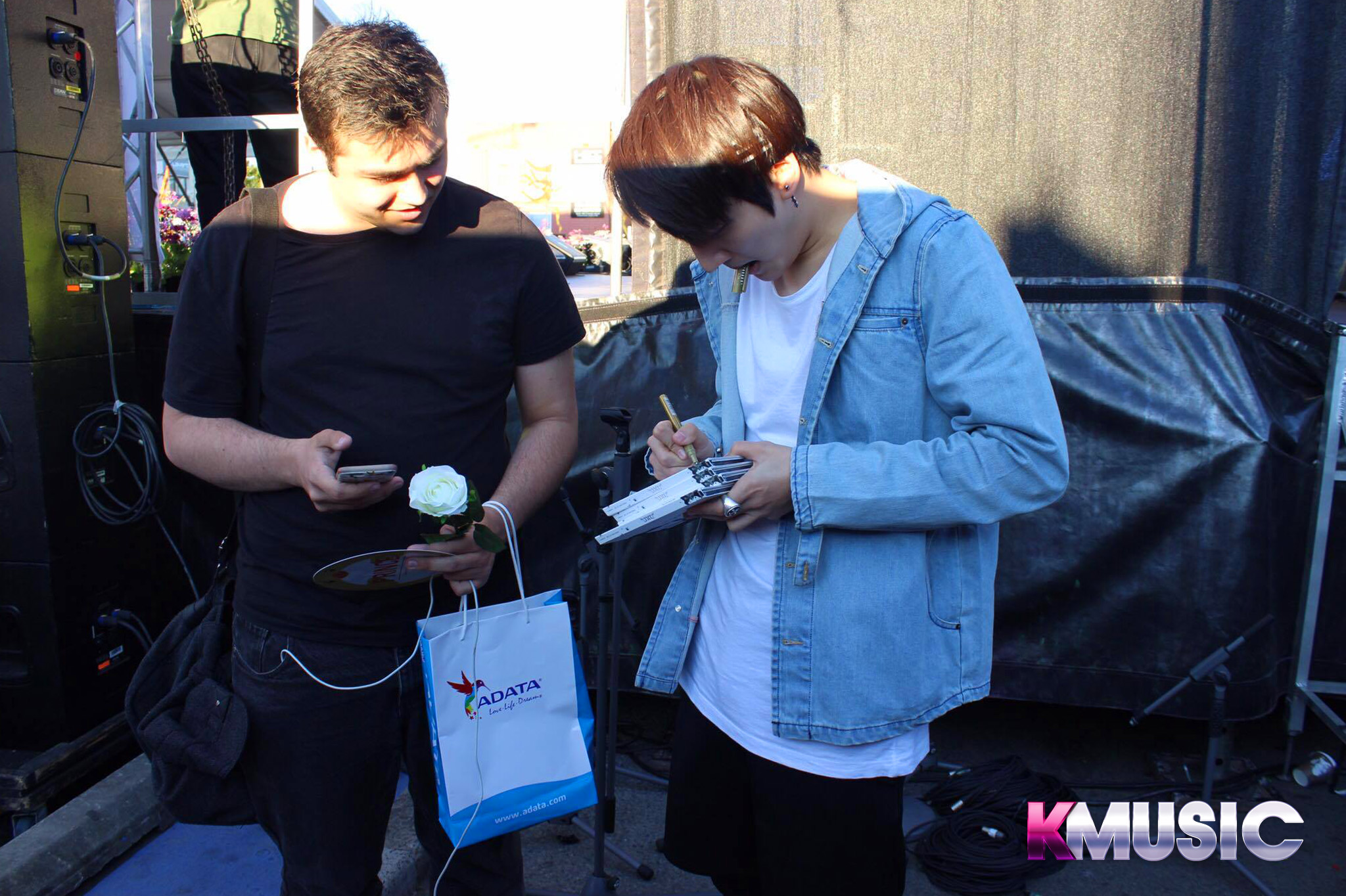 KMUSIC: What do you miss the most about Australia?

Prince Mak: Everything about it, um, Australia is my home, so there’s family, friends, but apart from just that I must say I’ve been to so many countries Australia is seriously the best country. Um, best for me that’s for sure, because I grew up here, I’ve been eating food from all around the world… I’m very picky with my food, but Australia still has the best food, and I was born here so I’m gonna die here…Is that too much? He then asks and laughs.

KMUSIC: Since we talked about about Australia, we’ll talk about South Korea too. What did you like the most while living in Korea?

Prince Mak: I think what I liked the most about there is the entertainment culture and the entertainment industry there. Everyone’s very talented and it really pushes me to work harder as well. Also, another thing that I really miss about Korea is my members, yeah, I miss them a lot. I see them like once a month. Yeah, I go to Korea once a month still, and I even see them practice and I watch them practice, and I hang out with them a lot, because my work now is basically in China. I still try to keep in contact with all my staff and all my members that still live in Korea.

KMUSIC: What are you doing in China right now?

Prince Mak: Well, because before I was trying to get my working Visa, and now that I’ve already got my working Visa I’m going to start going into acting. So recently I’ve been preparing a lot of acting stuff and also I’m still learning, um, I’m learning martial arts. Yes, Jackie Chan organised something for martial arts, I’m doing acting, doing MCing as well. I just did an MC work the day before I came to Sydney, so as soon as I finished that work, I went to the airport and cam here.

KMUSIC: Was it for a T.V show?

KMUSIC: What was it?

KMUSIC: Since you’re acting there, have you scared any roles?

Prince Mak: Uh, I do have a few roles but, I can’t mention about them yet. But, please look out for them.

KMUSIC: Do you have any hidden talents?

Prince Mak: Oh, I don’t really like to hide my talents, I pretty much show them…actually my martial arts is doing really well. So, I can do some flips and this and that now. Yeah, but I just really want to try, actually today, someone asked me to do martial arts but I really wanna keep it cause I’ve been practicing for so long, I didn’t wanna just do something, because I really want to leave it as a big surprise for everybody.

KMUSIC: What kind of mentor/ boss is Jackie Chan to you?

Prince Mak: Before, he actually didn’t teach me martial arts because, well he was too busy, but he did have his students come to teach me. But, he teaches me about life, the industry. Apart from just being a mentor, he’s also like a father figure to me.

KMUSIC: Do you speak to him in Chinese or English?

KMUSIC: If you could collab with any artist, who would it be?

Prince Mak: My favorite artist is actually not alive anymore, Michael Jackson. I love the way he dances, I love the way he sings, and stuff like that.  Yeah, I wish I had the chance to collaborate with him but, now, I don’t know, I really don’t know. I think BTS is pretty awesome, I like BTS a lot, I actually quite like BTS.

Prince Mak: I think it has to be between Rapmonster and I have to say Suga because, I’m friends with Suga so if I don’t say Suga then…I’m not close friends with him but I would say we’re friends.

KMUSIC: A fan named Te Maia asked, is there any part in one of your songs that make you cringe?

Prince Mak: When I listen to myself I cringe at my parts. I think because, my parts in our songs are mostly English and sometimes it’s really corny, like really corny or doesn’t make any sense. 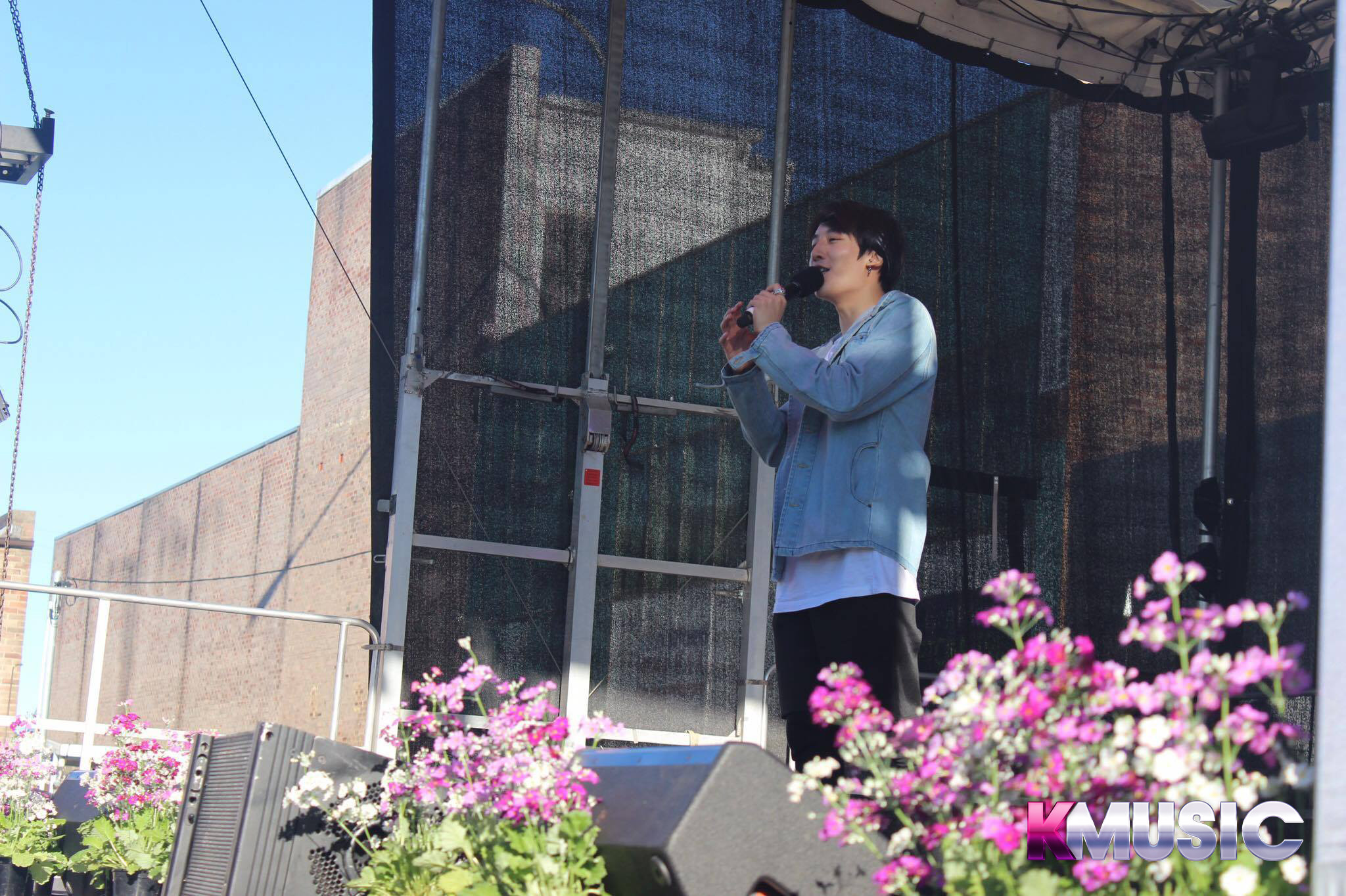 KMUSIC: Can you give us an example?

Prince Mak: Uh, actually before, I think one of our songs says “Hey girl, wanna naughty, naughty?”…and uh-yeah, I can’t really remember, I just remember there was “naughty, naughty” in it and I was like, I think we have to change that… Yeah, ya know? It just sounds really corny, but I think for me it was just something I remembered.

KMUSIC: Cindy wants to know, how was trained life and how did you get scouted?

Prince Mak: Training life? I actually haven’t been a trainee in Korea. Because, as soon as I. See I was in a singing competition and I ended up getting first place, so I was scouted by Jackie Chan and then he just sent me to Korea. He talked to me and then he just sent me to Korea. Then, about 2 weeks later I debuted. 2-3 weeks later? So when I got there, it was just preparing for debut. I just had to record the song, shoot whatever, and then promote, that’s it so I didn’t really do the training and stuff like the trainees do. I wasn’t in the first music video though because, I was injured. But I still sang and performed it because I debuted in it. On the day of the shooting, I got injured on the way to the set. It was snowing and I slipped , and I hit my head in the right side of my face, and I still have the scars there. You probably can’t see it but, I was bleeding out from there and a bit of my eye was swollen but, forget it.

KMUSIC: Do you have any plans of starting your YouTube page again?

Prince Mak: Yes, I would like to start it. It’s just that I’m in China and I can’t get on YouTube. It’s really hard, because it’s blocked. But yeh, I really want to get into YouTube stuff, but uh, I think maybe in the next month or so I’ll start my YouTube up.

KMUSIC: Do you have any upcoming plans that you can tell us about?

Prince Mak: So, like I said before, I’m doing acting and my company has a lot of plans for me. So first acting, variety shows, and then I’m gonna start doing music.

KMUSIC: Lastly, do you have any last words for your fans?

Prince Mak: I want my fans to always support and love me, always stay by my side. I know these days I’m going a bit slow, and I haven’t been doing much, haven’t been very active but, I’ll start showing more of myself and also please keep supporting JJCC.

We would also like to give a special thanks to Fairfield City Council and Suzie for allowing us access.

Scroll for more
Tap
The Gentlemen Of 2PM Are Looking Seductive In Their Comeback Teasers!
A Look Into The “SHINee WORLD V” Photo Shoot
Scroll
Loading Comments...