K.A.R.D‘s first US stop on the WILD K.A.R.D tour was at the Copernicus Theater in Chicago. The group came out with energy and charisma for their opening songs. The fans were on their feet and singing along as they began what was shaping up to be a memorable event.

After brief introductions, K.A.R.D got right into answering fan’s questions that had been submitted. BM picked the first question – “What song is your current obsession?” His answer was Chance the Rapper‘s song ‘No Problem‘ and he even rapped a quick verse at the MC’s prompting.

Next for picking a question was Somin. Her question was, “What is a compliment that you can give to the person on your left?” She answered that Jiwoo “has a very cute, mochi like face, but is also very charismatic on stage and who has a lovely, lovely vocal.” When asked what she thought about the compliment, Jiwoo agreed.

Jiwoo went third and pulled the question, “What is your favorite part of being in a co-ed group?” She stated that they have fun together and, “have a really good vibe.” Jiwoo concluded, “I feel that being a co-ed group is what makes K.A.R.D special.” 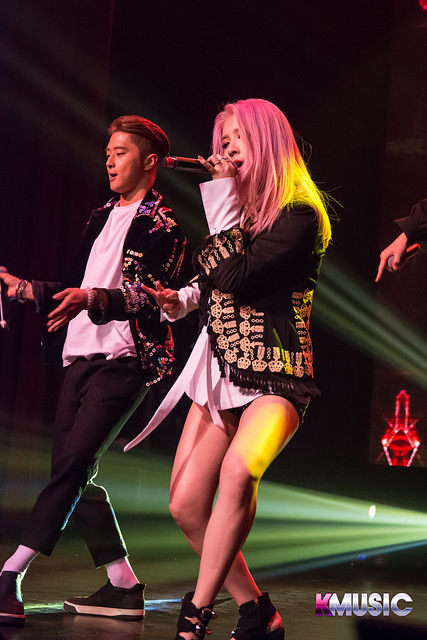 Lastly it was J.Seph‘s turn to pick a question. “Who are some musical artists who have influenced your individual styles?” J.Seph revealed CJamm as one of his musical influences.

Somin answered about BM, first stating that she first met him when she was young and he was wearing a basketball jersey and a camera bag. When questioned about the camera bag by the MC, BM replied that he was filming his own dance videos at the time.

Jiwoo first saw BM on his birthday and, “thinks of herself as his present.” She was referencing the answer at their Vancouver stop, the question being a repeat from that show, and was quoting what BM had said about them meeting on his birthday.

J.Seph thought that BM’s Bulls jersey was really cool and that he’d like to take it from him. Joking, the MC suggested that BM buy him one so it would be couples jerseys and BM said he would for J.Seph’s birthday.

There was one final question, “How do you feel about receiving so much love and support as a group that hasn’t officially debuted?” BM answered first that it was “unreal” that they have a US tour and expressed his gratitude for all the love and support so far. Somin said that it’s “like a dream” and that she’s “so happy.” Jiwoo felt honored to be there and she and J.Seph both expressed their thankfulness to the fans concluded the Q&A session of the fanmeet.

Following the Q&A, K.A.R.D performed special unit stages. The first special for unit stages was Jiwoo and J.Seph performing ‘B*tch Better Have My Money‘ by Rihanna. The two vocally blended well with each other throughout the song. BM and Somin performed next with Ariana Grande’s ‘The Way‘ featuring Mac Miller. The two have good chemistry with the sensual dancing and Somin’s voice fit the song wonderfully. 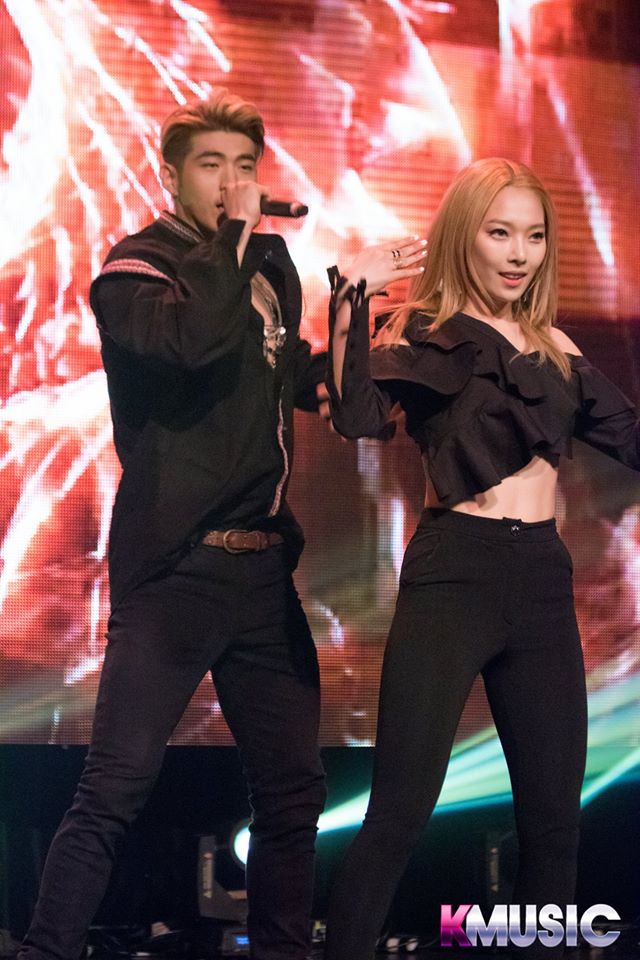 Fans were treated to a video featuring K.A.R.D preparing for the tour. In the video, they got to see the members practicing, recording, and being silly together. The members are shown working hard into the night to prepare for their tour. K.A.R.D also introduced the next song, a sneak preview from their debut album. The song ‘I Can’t Stop‘ is a remake from a DSP group called Zam.

K.A.R.D returned onstage and preformed the new song. The song has a good beat and their dancing was fun. The fans fed off of the members’ energy as they performed.

Moving on the next portion of the fanmeet, they talked briefly about their special until stages and the new song. BM expressed the group’s sincere apologies over the misunderstanding in Vancouver, clarifying that the song was censored and they truly love and appreciate all cultures.

Game time with the fans brought loud cheers from the crowd. Four randomly selected fans were brought to the stage. The game was for the lucky fan to roll a die and depending on the number rolled, they’d get a wish. What the wishes were was determined by the number on the die. For the number 1, the prize was to be serenaded by a member, 2 was to take a selfie with a member using your phone, for 3 a member will record a personalized wake up call, 4 was a Polaroid photo shoot with a member, 5 was an autographed poster and a hug, and number 6 was an all member signed album.

The first fan was with BM and rolled a 2 and got a couple selfies with BM on his phone. The second fan got a 6 with her roll and received the signed album and got a hug from Somin. The number rolled by the third fan was a 3. Jiwoo recorded a beautiful wake-up call singing part of ‘Beautiful‘ by Crush from the Goblin OST for her. After a couple of attempts as the numbers could not be repeated, the fourth fan finally rolled a 1 and was serenaded by J.Seph. He sang ‘L.o.v.e‘ a jazz standard made famous by Frank Sinatra for her. He surprised the other members with his song choice, prompting Jiwoo to comment that it’s not his usual song and that J.Seph isn’t very sweet. All the members gave the lucky fans hugs as they left the stage. 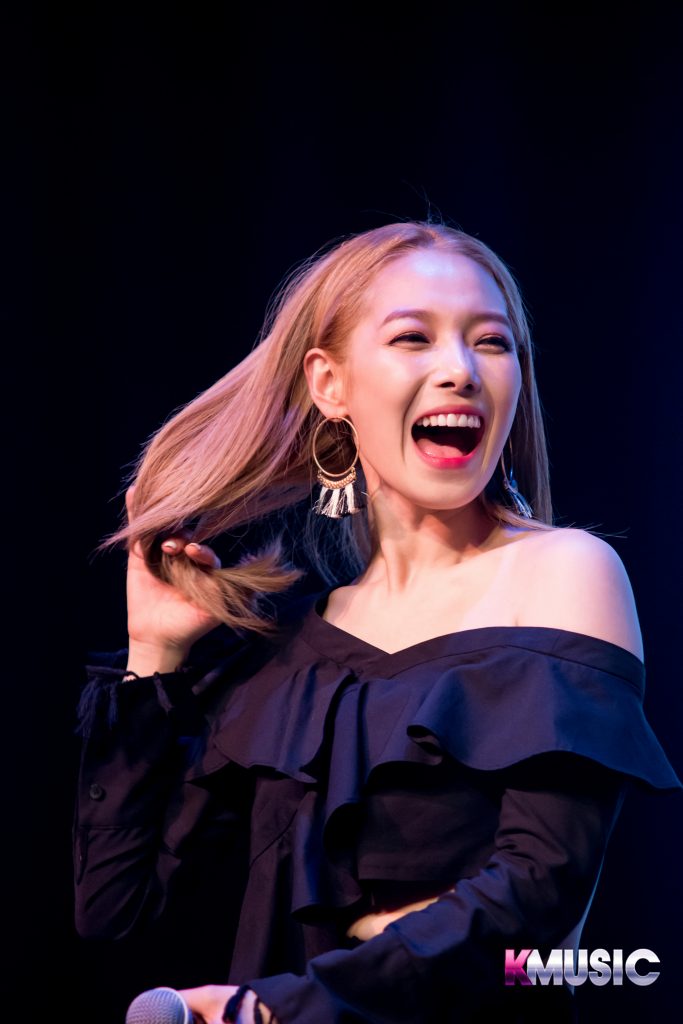 K.A.R.D had another game lined up – random play dance. Their songs were played at random points and the members scrambled to get into position. The songs also sped up and slowed down. It was interesting and humorous to see the point dances at half speed!

Somin and Jiwoo were on point, hitting their marks and making the game look too easy. The boys had a bit more difficulty and both BM and J.Seph kept getting lost.

At the end of the game, the crowd voted BM as making the most mistakes of the night. As punishment, BM had to do 15-20 seconds of sexy dance. Despite acting nervous and shy at first, BM did an 180 once the music started. He flashed his abs and showed off his skill at sexier dance moves, drawing loud screams from the fans.

After the random dance game, K.A.R.D performed Ariana Grande’s ‘Side to Side.’ The song started out with Somin and Jiwoo showing off their beautiful vocals before being joined by J.Seph for the second verse. BM joined the rest of the members on stage at the chorus and everyone got to see choreography that is quickly becoming recognizable as K.A.R.D’s style. 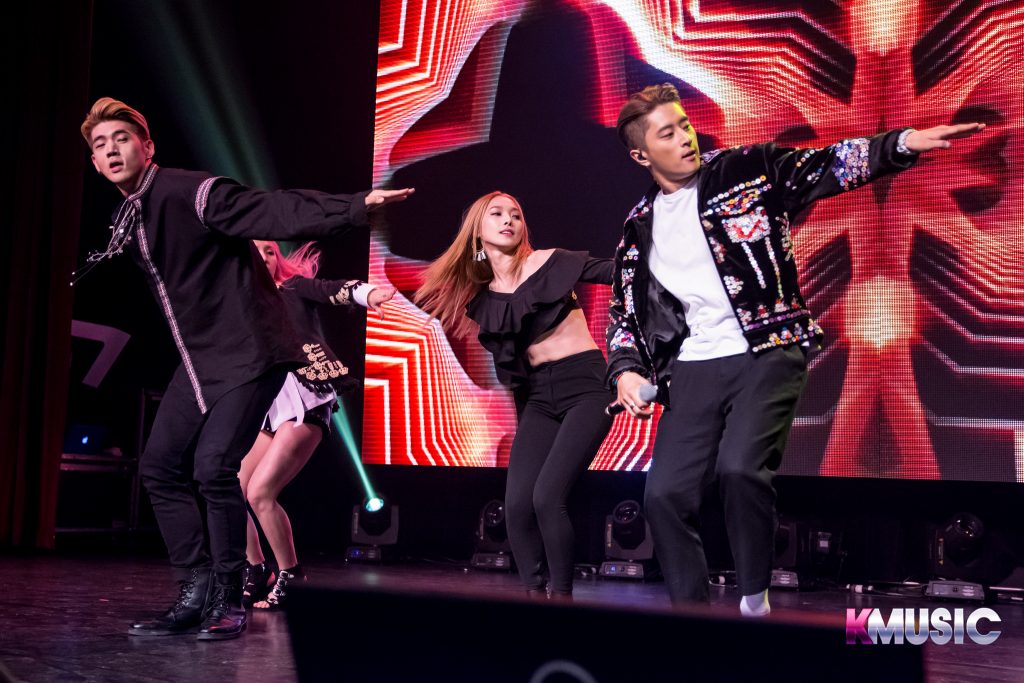 The fanmeet was nearing its end as the time for the members to give their final farewells after the coversong. BM went first exclaiming “Chi-town, you guys are live as hell!” He went on to say that they were nervous and a bit scared of the tour as they had no idea what to expect, and they were all blessed and so grateful to the fans. “We are definitely gonna be back to Chi-town!” Somin expressed that they have more to offer in the future. Jiwoo started with a loud “I love you Chicago!” She apologized again for the misunderstanding and hoped that it will all be understood moving forward prompting fans to yell assurances that they understand and it’s going to be okay. She also expressed her desire to be back in Chicago in the future. J.Seph stated that “it was a beautiful night” and that he hoped fans would stay safe on their way back home.

K.A.R.D had one more song for fans before the end. They performed ‘Oh Na Na‘ as if it was the beginning of the night and not the end. The fans sang along with every word and the energy was soaring as they finished the last song.

Of course, no show is complete without an encore. The crowd chanted for K.A.R.D to come back to the stage and they didn’t disappoint. They performed their other two songs as an encore, starting with ‘Don’t Recall’. The members were having fun, taking videos with fans’ phones and dancing along to their favorite parts of the choreography. Towards the end of the second encore song, ‘Rumor‘, BM took off his black tour shirt to reveal his Bulls jersey.

The fanmeet officially ended with the P1 photo op and P2 high touch.

Check out our photo album out HERE for more photos!

A huge thank you to DSP Media and Subkulture Entertainment for the opportunity to enjoy this experience and many thanks to K.A.R.D and their crew for a wonderfully fantastic show.

Check back here at KMuisc for our EXCLUSIVE INTERVIEW with K.A.R.D and for more upcoming event coverage from around the world.