The Rose returned to Europe for their second tour this year and their reappearance in Europe was one of the most awaited ones as their first tour sold out quickly. For the fans in Berlin, Germany, their dream of seeing the band again came true on 18th November.

In a rather cold autumn weather and under the falling droplets of rain the fans waited outside, chatting excitedly, before they were all allowed into the Kesselhaus where to concert took place.

We are now bringing you two main reasons why to not miss a possible return of The Rose in the upcoming years. 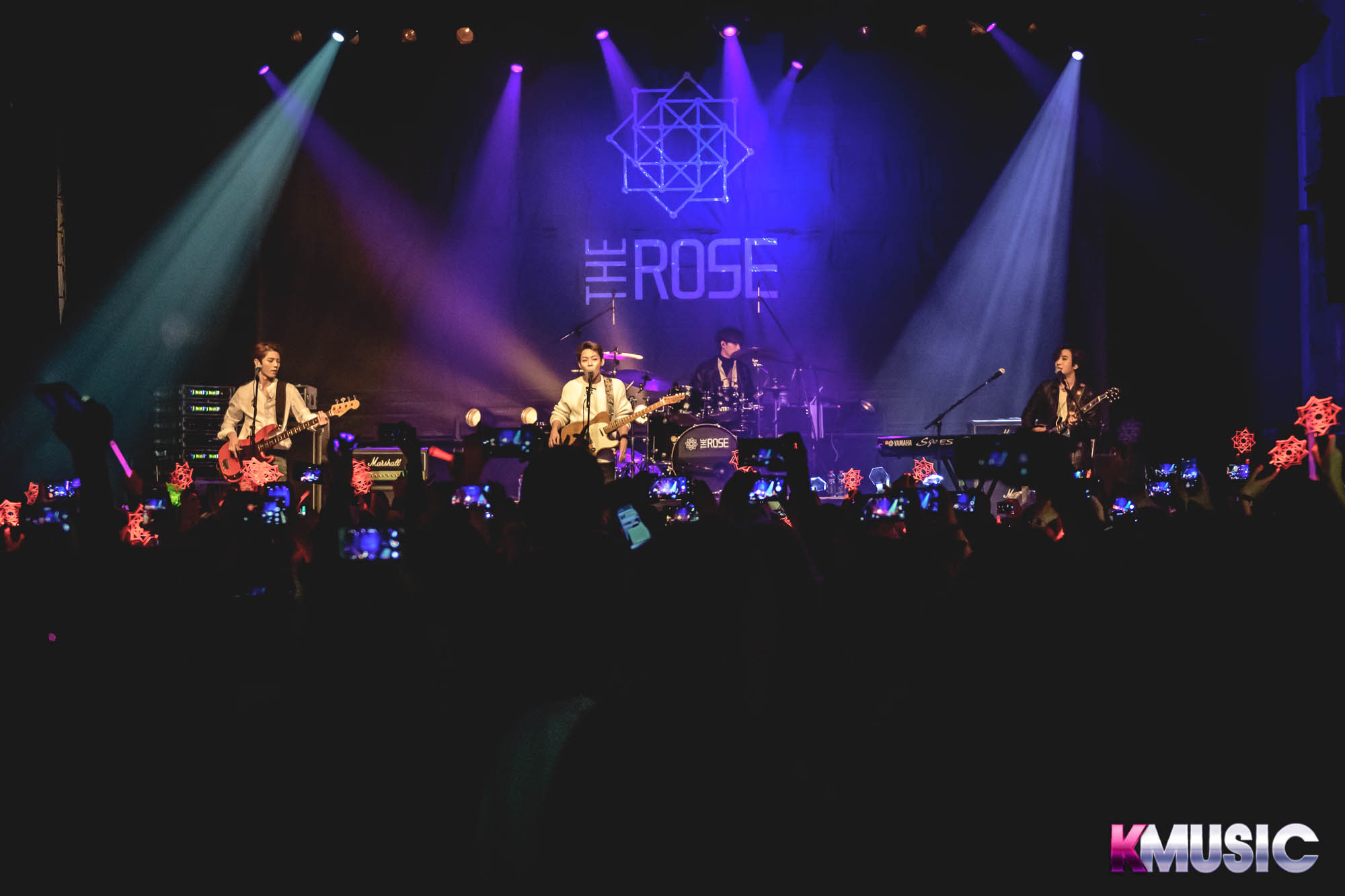 The music and the group

The Rose´s tracks are of that kind which will make you forget about your daily fatigue and fall in love with the band instantly. And that was exactly what happened in Berlin. When Hajoon sat to his drums, Leo took place by the keyboards and Jaehyeong with Woosung  stood with their guitars in front of the fans, everyone forgot about the long day they had. And while listening to The Rose´s songs through the night even those not as familiar with the band as others fell head over heels with their songs and characters.

The guys presented a mixture of their older songs as well the latest ones. The very first track of the night was ’I don´t know you’ followed by ’Candy’, ’Like we used to’ and ’Photographer’. For the last song the fans clapped their hands to the rhythm making the members of The Rose smile widely. 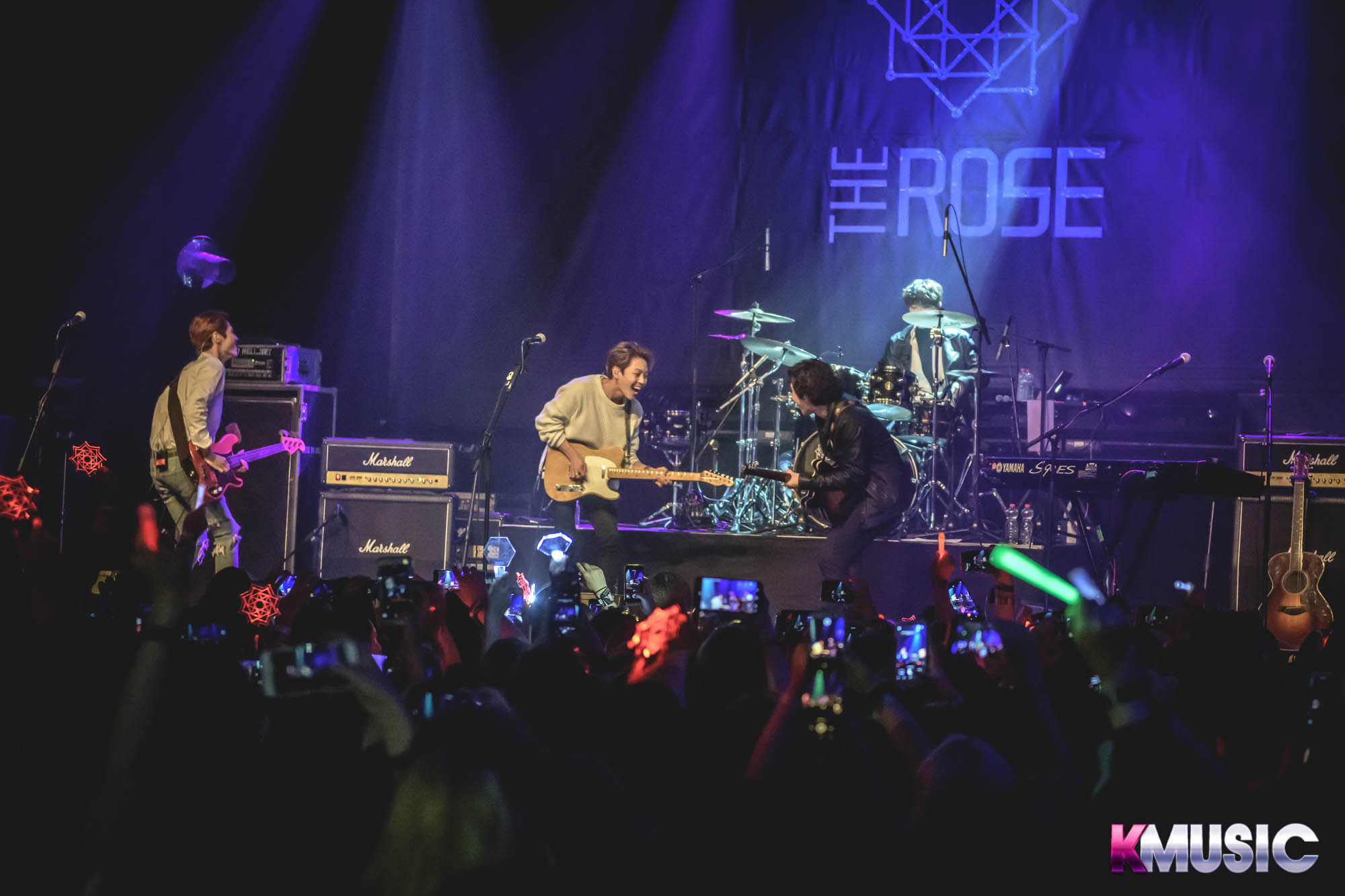 The set list followed with many other songs, including a cover of ’Bae Bae’, originally sung by Bigbang, ’She is in the rain’ , The Rose´s newest track, ’California’ or ’Take me down’ . Before the song ’Take me down’ the fans were tested on how well they can cheer for the band during the song, but their weaker response did not make Woosung happy and he noted: “This is the best you got? We will just start the song and see how much you can surprise me.” And to be honest the fans did surprise everyone when the song started and they cheered loud enough to bring the house down.

One of the biggest surprise, however, came when Woosung´s guitar string snapped and it had to be replaced. While his guitar was backstage the guys performed two additional songs, one of which was an improvisation created on spot. And we all wished this song had a studio version as well, but that is the gift of live performance – you get to hear something no one else can find outside of the venue. The second song was a cover of Ed Sheeran´s ’Thinking out loud’ and the hall filled with not only the band´s voices, but also fans who joined in in singing.

The Rose performed their best hit songs and everyone could tell how much they loved being on stage, playing for their fans. They showed us what great musicians they are. 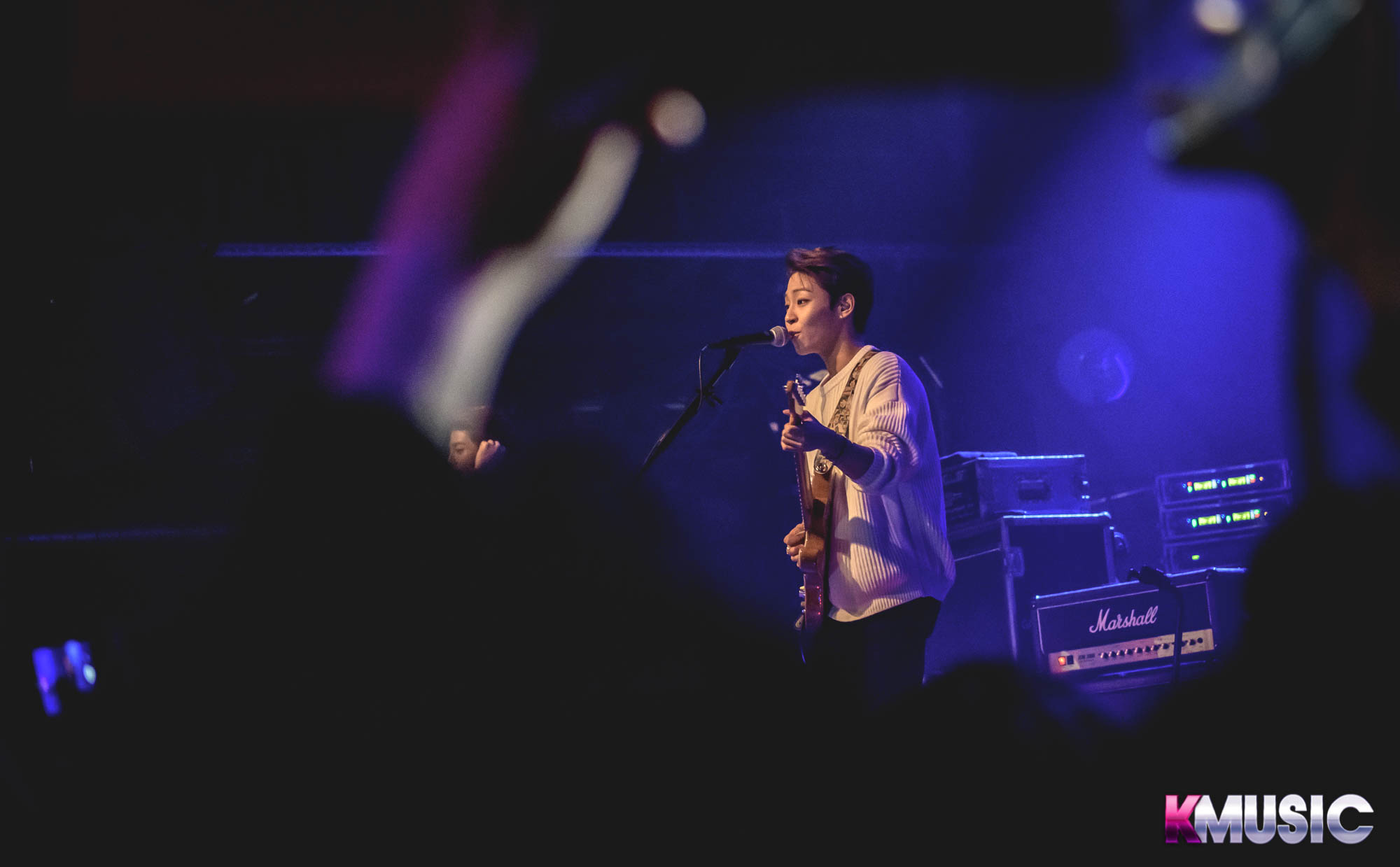 The interactions and the fans

When the first ment came and the band introduced themselves to the crowd, the response was so loud the members had to stop here and there to be heard over the crowds. It was hard to tell by whom the fans were the most excited about, the charismatic Leo, smiley Jaehyeong, playful Woosung or mysterious Hajoon.

“What is up Berlin? We are finally here!” Leo greeted the fans. “This is Leo from The Rose!”

“Is it raining outside right now?” Woosung asked and fans partly sadly said it is pouring hard. And in a rare quiet moment one fan screamed out her love for Woosung to which he instantly replied he shares the same feelings. 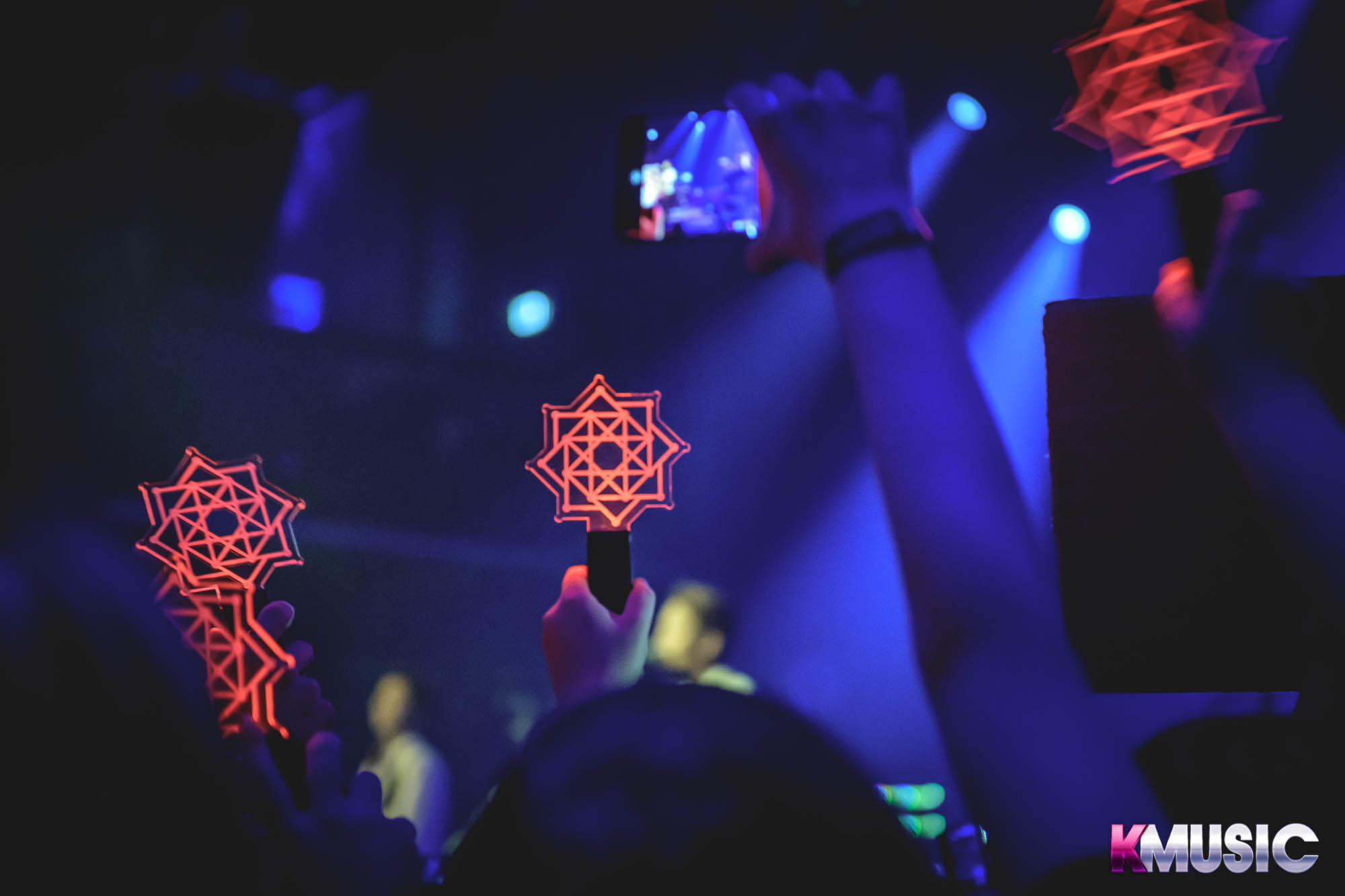 There were a few fans who did not feel well during the concert and whenever the guys noticed someone fainting or feeling dizzy they stopped playing and made sure the fans are getting some help. This was very considerate of them and the fans were also cooperating well, making a way so that the fans can get out for some fresh air.

In general, the Black Rose fandom was very friendly and took care of each other well. There was no excessive pushing, everyone took noticed of people around and fans even let smaller people to the front so that they can see well. We did not see this kind of family-feeling during a concert in a long time and would like to bow not only to the band, but also to the fans. They all created a night which was safe and enjoyable for everyone. 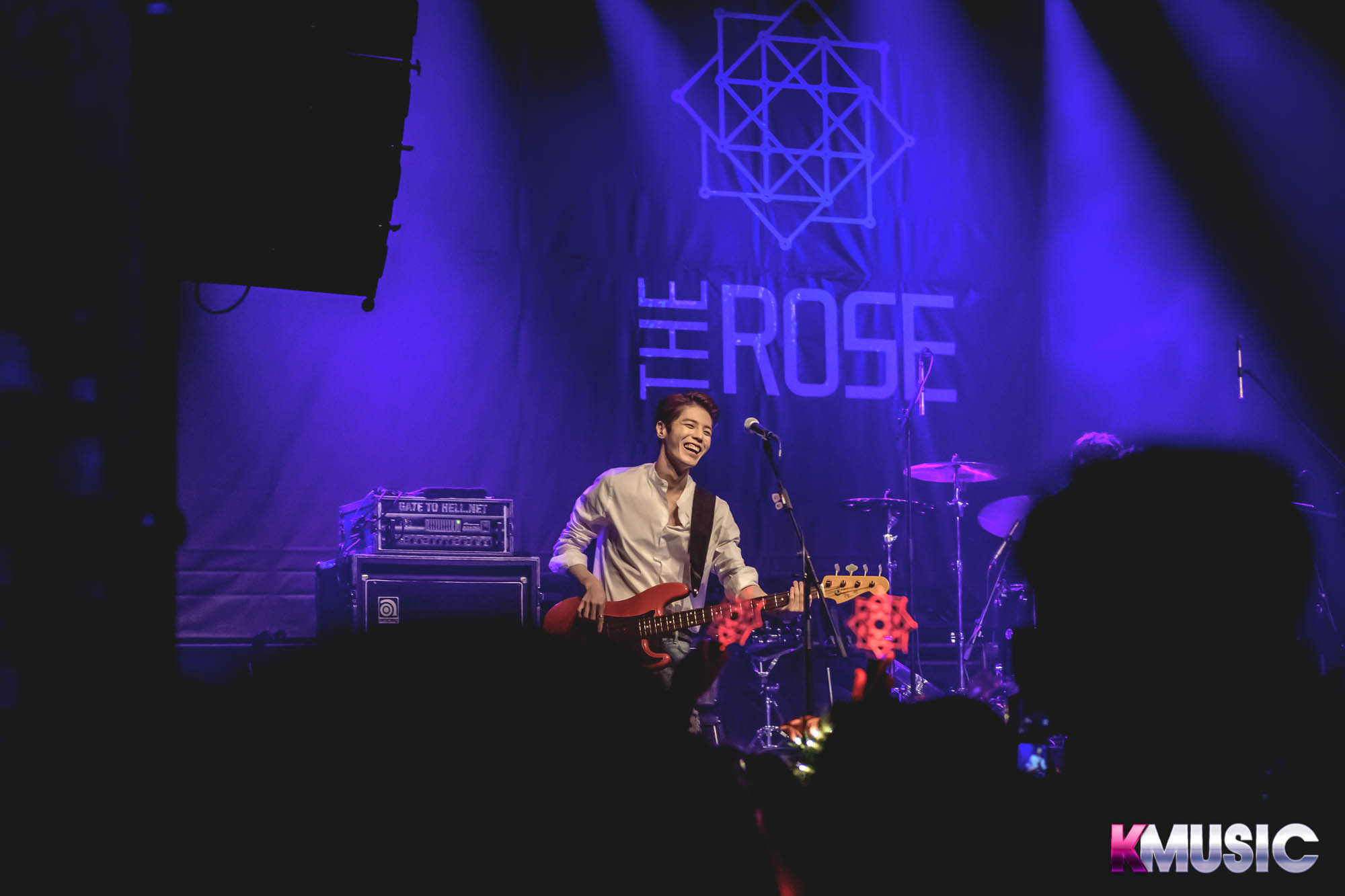 During one of the songs, the band also showed a bit of a bromance and fanservice, when Woosung back-hugged Jaehyeon or when Leo danced cutely for a few seconds. One could think that Hajoon was not in the spotlight, hidden behind his drums. But when he got to the front so that fans can see him properly, Black Roses showered him with cheers and screams of admiration none from the other members received that night.

But maybe it was Jaehyeon who received the second biggest response whenever he spoke in English. His shyness and cute mixture of Korean and English move everyone´s heart. At one point he took a lightstick from a fan in the first row and wrapped it around his microphone which caused a bit of a delay later one when he was supposed to take the microphone for his solo song. He struggled for a bit before untying the string and giving the lightstick back to the fan.

And it was not the only direct interactions he or his band members had with the fans. They were constantly sending small hearts to the crowds, taking notice and smiling to the people on the balconies and reacting to fans´a screamed messages. The fans at the front could see them up close when the members bend to sing in front of them, or when they reached to take their banners for the final photos on stage. 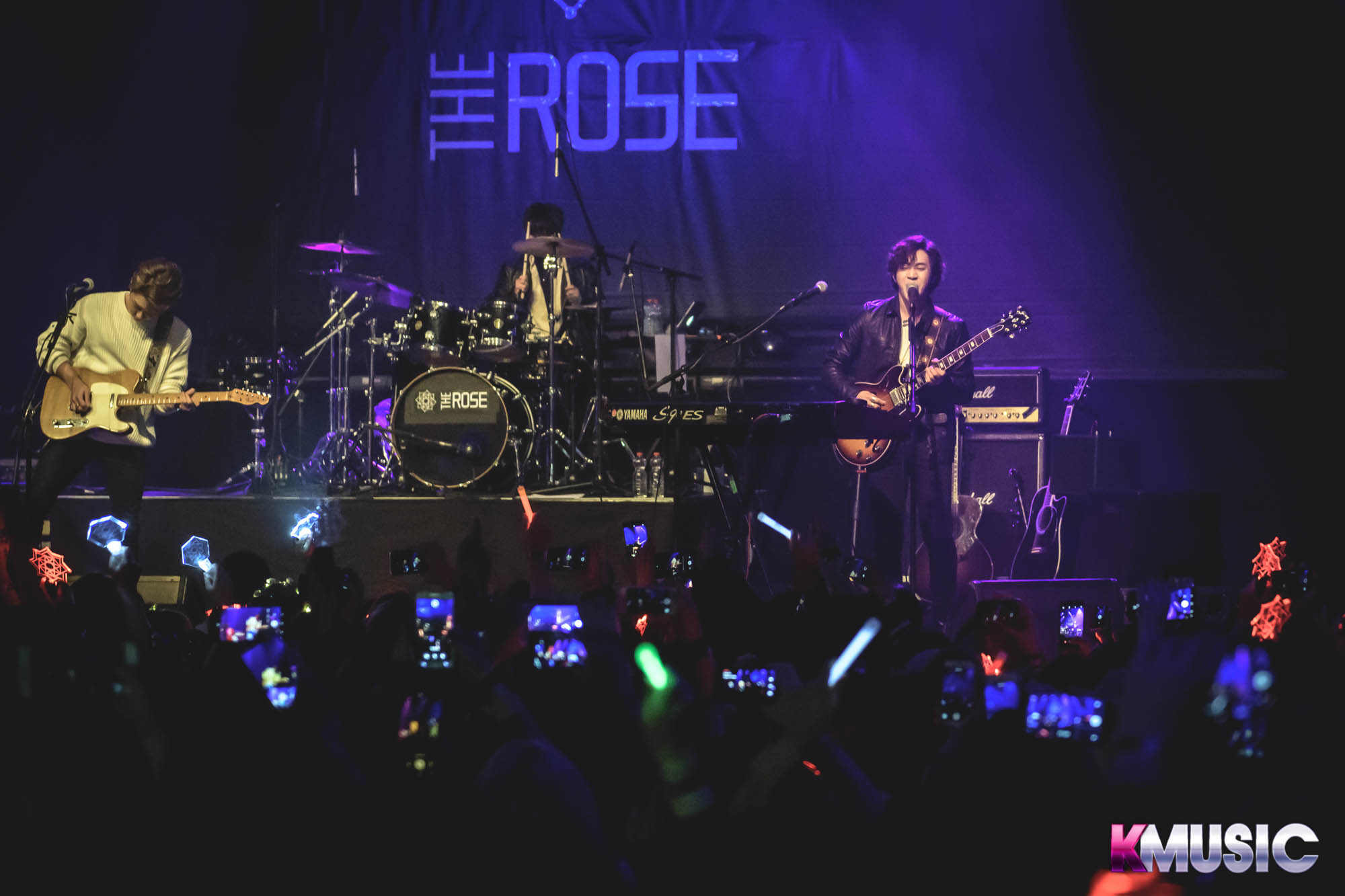 To wrap things up, The Rose concert was filled with a friendly family-like atmosphere. Fans enjoyed their favorite tracks and received some additional ones as a surprise. Everyone welcomed the band greatly and it was sad seeing the members leaving the stage for good. The members of The Rose made sure everyone had the best time ever and we truly wish the rest of their tour goes smoothly. And hopefully, see them in Europe again.

We would to thank MyMusicTaste for bringing The Rose back to Europe.

View the full photo album from the concert here.