It is fitting that the first ever North American ‘SHINee World V’ Tour should have its end at the historic Shrine Auditorium. The Shrine, once home to the Academy Awards, is a six thousand seat jewel nestled at the top of the crown that is the University of Southern California’s sprawling campus. For years the glamorous venue has been referred to as “The Pinnacle” by concert goers since there’s not a bad seat in the house and the acoustics are excellent. It is perfect setting for what was certain to be the pinnacle of KPop performances. So it was that eager fans streamed into the venue just before 8pm, ready to witness some history. 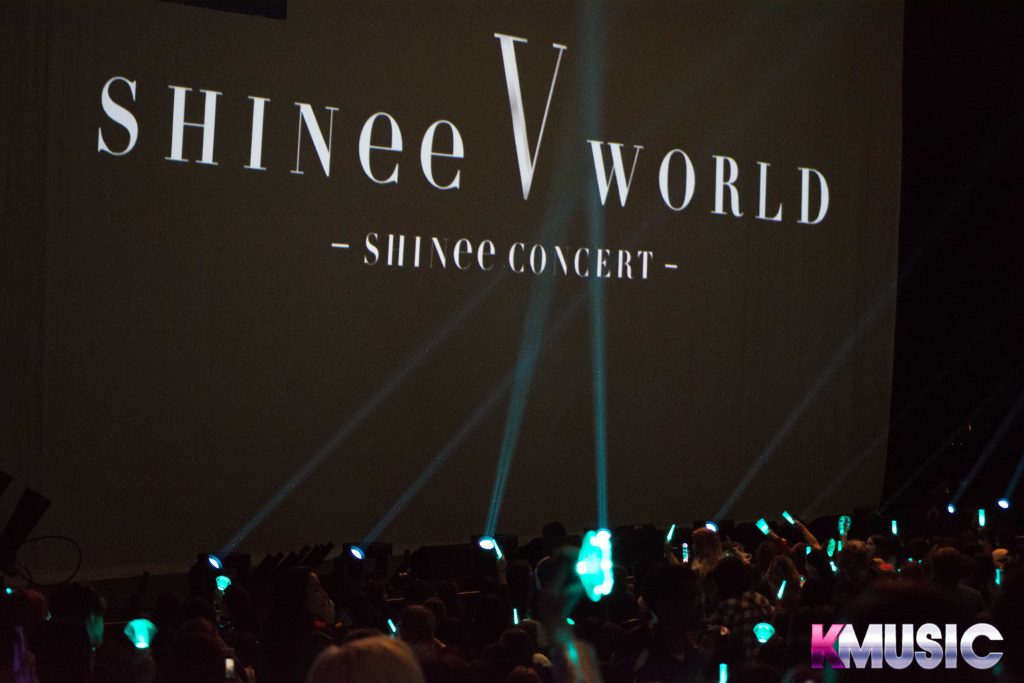 Thunderous screams greeted the opening VCR, depicting the SHINee members in a storybook-like setting. At the close the cheering rose, as did the screen, to reveal SHINee on highrises wreathed in smoke and dressed in suits and jackets with their signature riot of colour. The high tempo bassline of ‘Hitchhiking’ pulled even louder screams from the crowd, who chanted along with member Key as he sung the familiar opening lyrics. ‘Hitchhiking’ was followed at breakneck speed by fellow Misconceptions album track ‘Why So Serious’ and then their second LP Romeo’s title song, ‘Juliette’ including a fantastic Key-feature dance break. The fans’ screaming did not let up for the entire fifteen minutes – and it’s safe to say that their enthusiasm was matched only by the five men on stage who performed like this was the first show of the tour instead of the last. 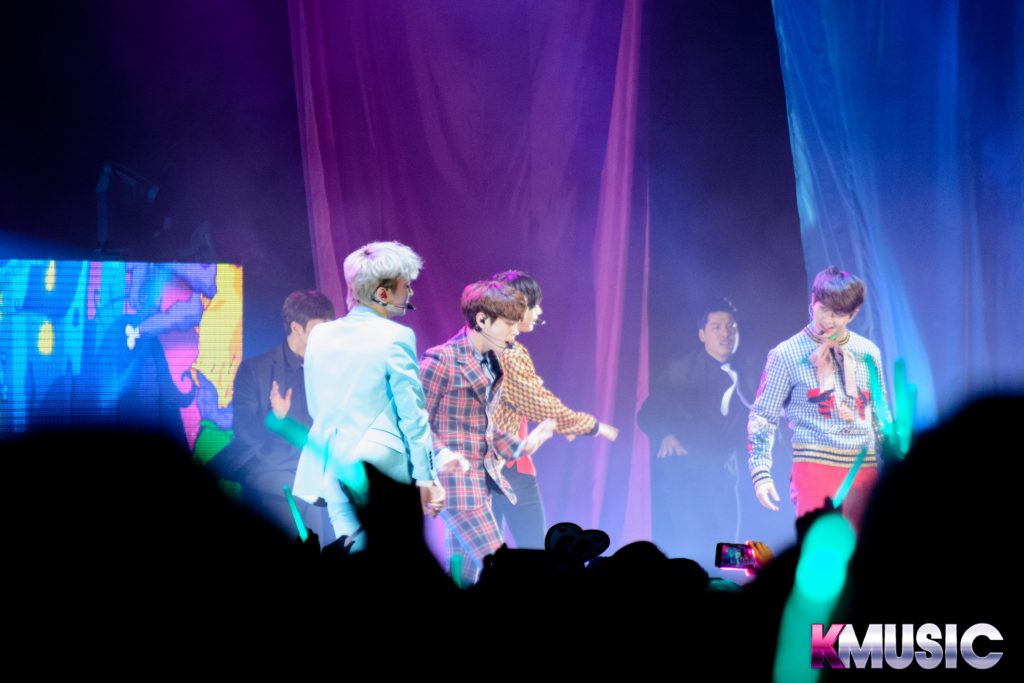 After ‘Juliette,’ the quintet took a short break to greet their fans, also known as Shawols, and to thank them for coming. Saying that they’d always wanted to come for a real SHINee World Concert, Minho asked, “Did you miss us?” to the wild cheering of the crowd. “Me, too!” he grinned, waving from the orchestra up to the balcony. Not one to miss an opportunity, Key added with his usual shrewdness, “This is real. You guys are not watching YouTube right now – so thank for coming and please, enjoy the show!” 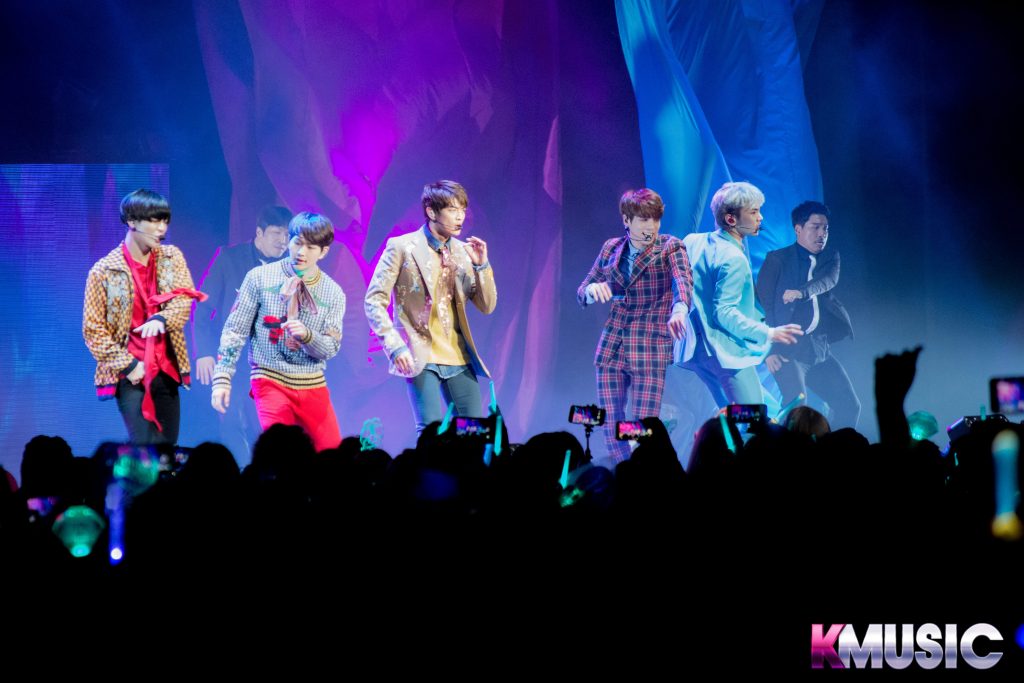 That was not going to be difficult for these fans. In a Shawol’s dream come true, SM Entertainment chose to slightly alter the original SHINee World V setlist for North American fans, the majority of whom have never had the opportunity to see the group perform live. There were classics from their first years grouped alongside SHINee’s latest hits, fan favourites, and a few rare delights. While some fans did lament missing ‘Married to the Music’ and ‘Trigger,’ Shawols were thrilled that newer tracks like ‘Prism’, ‘Feel Good,’ and ‘Savior,’ as well as a highly coveted live performance of ‘Odd Eye’ from their latest albums, Odd and 1of1, were kept in. Also featured was Taemin’s dance and vocal solo,’Goodbye (Sayonara Hitori),’ complete with mesmerizing choreography and frankly amazing lighting – and then the spectacularly bright red zip up hoodie he donned immediately after for the classic ‘Ring Ding Dong.’ This earned him the title of fireman from Jonghyun. After Minho and Key remarked on how impressed they were with the LA crowd’s ability to sing with them in Korean, they split up for a costume change where Jonghyun, Onew, and Taemin remained on stage. Jonghyun mentioned the fans’ incredible passion and Taemin echoed him, and there was a bit of discussion about Taemin’s status as a fireman with the colour of his shirt. “Will you be putting out some fires here today?” Jonghyun teased in Korean. Nope – “I want to fire you guys up!” was Taemin’s reply, which was met with lowkey giggles from both his elder members and with screams from the crowd. 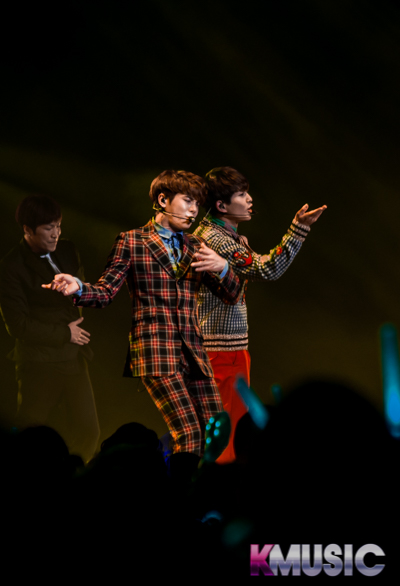 Once Minho and Key were finished changing into loose silk shirts and slacks, the other three left the stage and Shawols enjoyed another memorable moment – these two together. Most kpop fans know Key as a consummate and self-taught English speaker. But Minho’s English is nothing to sniff at. Minho’s dazzling charisma and Key’s sardonic commentary always create a special kind of chemistry. Minho told everyone about attending an LA Clippers game, happily miming dribbles and taking a jump shot – Key cut in with the lackadaisical mention that Minho also bought some shirt that cost him $300. Minho sailed right past that pointed comment, mentioning that he loves Kobe Bryant and basketball, and was sad both that the Lakers didn’t have a game and that the Clippers lost. While the crowd verbally echoed Minho’s little pout, Key was having none of it. “So, I don’t know anything about basketball. So what did you eat today?” The crowd chuckled and even screamed their approval of Key being Key. And ever the jovial one, Minho acknowledged that Key had zero desire to participate in a conversation about basketball with a smiling response. “Hot dog, and In-N-Out burger. Yeeeah – SHINee like In-N-Out.” Key agreed – by way of a long suffering head shake. Clearly it was time to change the subject again, which gifted fans with Key and Minho’s banter and brief renditions everything from La La Land songs to interpretive dabbing. 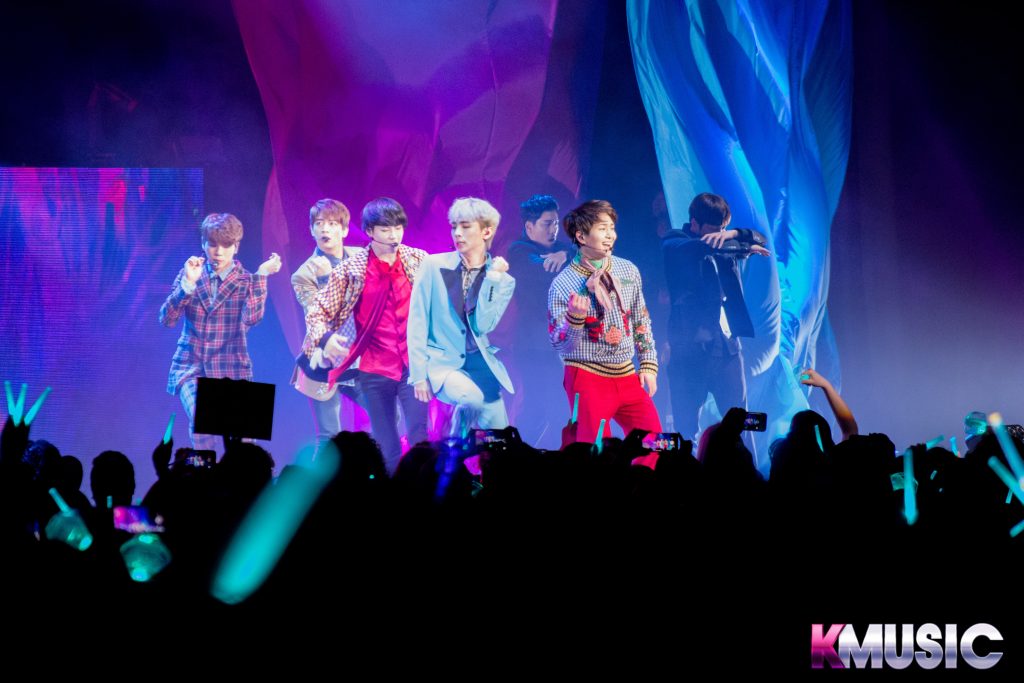 Onew, Jonghyun and Taemin returned to the stage as well, and Shawols were given yet another treat – after all the high energy dance performances, now came an especially meaningful performance of ‘Selene 6.23,’ a song about distance, love, and longing that Jonghyun says he wrote for SHINee’s international fans. This was followed by ‘Aside,’ another well known SHINee ballad, and then a moment that, once witnessed, seems like the sort that most North American Shawols will never forget. As Key said earlier in the evening, this was live, not YouTube or something else on a computer screen. Another incredible treat for Shawols that actually left fans of the two main vocalists weeping in their seats; Shawols had heard about Onew and Jonghyun’s performing the duet ‘Please Don’t Go’, but many never dreamed they’d see it live. It was absolutely one of the highlights of the show, both musically and as a performance. Onew stood on one of the highrises and sang in a way that made it look like it was the easiest thing. You could hear the tremendous power and wonderful warmth of his baritone roll out over the crowd like a wave. But looking at him, you’d think producing such sheer volume of beautiful sound was as simple and natural as breathing. Perhaps for Onew, whose voice is legendary even in the Korean pop industry, it might very well be. Meanwhile, Jonghyun’s parts were no less gorgeous. He stood opposite SHINee’s leader on the highrises, and instead of Onew’s almost surreal calm, Jonghyun’s dynamic, intense tenor was matched by the passion in his expression and his gestures. His was the perfect counterpoint, both in tone and in style, making it plain why SHINee is considered to be one of the best live vocal performance groups in Korean pop. 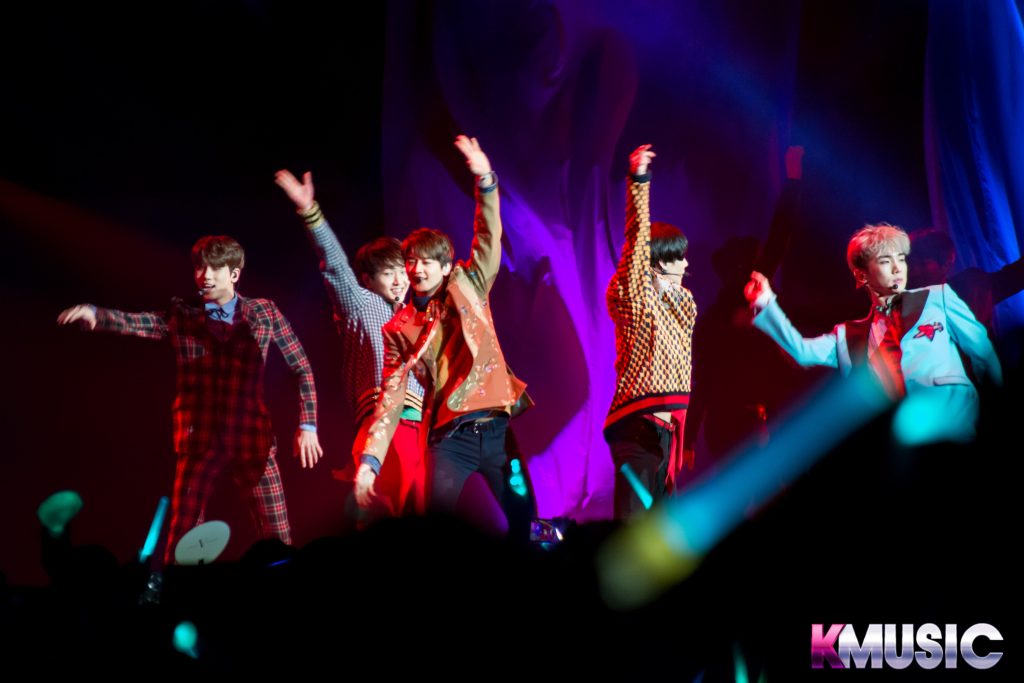 Another feature worth mentioning was the integration of other popular SHINee songs into the VCR sections. While they waited for SHINee to finish costume changes and take well deserved breaks, Shawols sang along with ‘Beautiful’, ‘Shift,’ and ‘Woof Woof’ – the latter being background music to an especially adorable and hilariously SHINee-esque ending VCR. They also sang the words to the instrumental medley that accompanied the mid-show VRC and included ‘Lucifer,’ ‘Sherlock,’ ‘View,’ ‘Replay,’ ‘Married to the Music,’ and ‘Everybody.’ Most of these were performed at some point during the show – ‘Lucifer’ was especially memorable for its hyped up EDM/club remix (as well as the nigh-perfect fanchants) – but the little nods to the much beloved ‘Married to the Music’ as well as ‘Woof Woof’ were a nice touch.

After the Shift VCR, SHINee jumped across their musical timeline – 2015’s critically acclaimed ‘View’ was followed by the 2010’s rousing ‘Ready or Not,’ then 2016’s ‘Savior,’ then the epic choreography of 2014’s ‘Everybody.’ Truthfully, this part was more than a little awe inspiring. They were more than half way through the show with very, very few breaks, on the final stop in a four-city tour wedged in between an already months long Japanese arena tour that continues in April. And through all 20 non-stop minutes, SHINee showed absolutely no signs of flagging. Johnghyun and Taemin’s execution of their choreography was not only flawless as expected, but also just incredibly powerful, filled with flourishes and Pantene-worthy hair flips. Minho never stopped living up to his nickname. He seemed on fire, tossing sultry glares all the way up to the balcony during relentless and perfectly executed body rolls. Key’s precise and cutting sass – which if you watch him perform you know is not limited to his commentary – was turned up to 11. Onew continued to move about the stage as though being up there was like being in his second home. Shawols chanted and jumped and danced along with them, making themselves part of the performance – SHINee’s sixth member, if you will. There was a palpable aura of joy, something that SHINee and Shawols both are known for, in experiencing the final portions of the show. Then another VCR, ‘1 of 1’ and ‘Dream Girl’ – and far too quickly SHINee took their bows and the stage went dark. 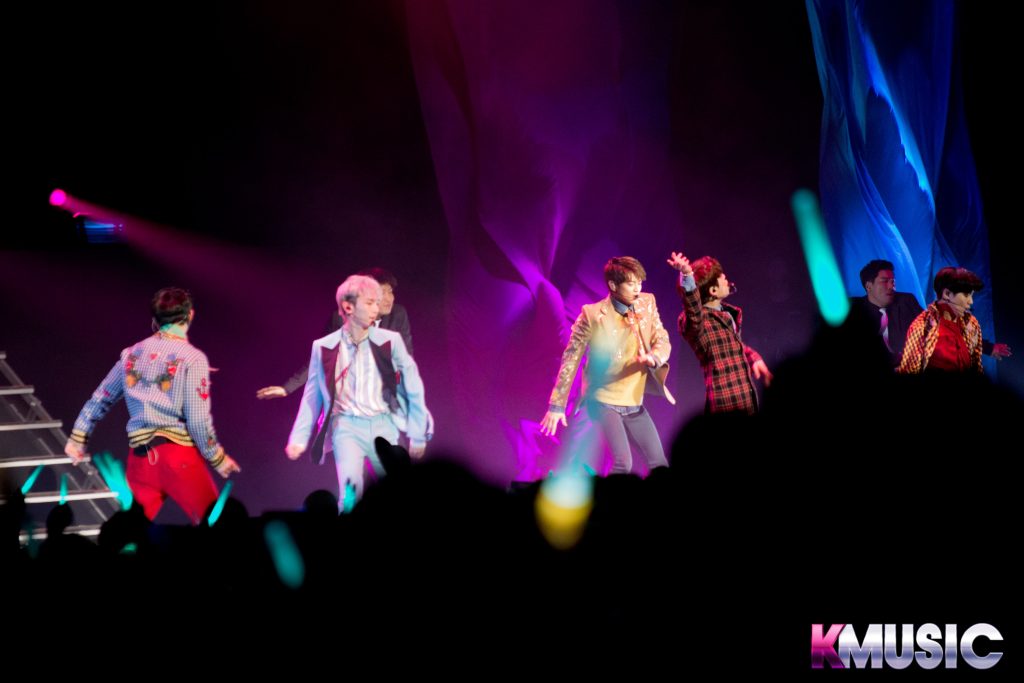 There was a sense in the crowd that it was over too soon. Even the usual chants of “SHA-EE-NEE, SHA-EE-NEE!” were missing as Shawols exchanged glances, surprised that the end had come so fast. But finally the chants did rise, and one last VCR began, after which the five shining men returned to the stage to truly say their farewells.

After the members once again thanked the fans for their love, their dedication even with such a long wait, and their passion, Onew introduced last song. It was a bit amusing because he said everything in English except for the song title, which caught Shawols by surprise. They cheered, of course, but it wasn’t until the music started up a second later that they’d realised what he’d said – ‘재연 (An Encore).’ Once again, there were more than a few teary eyes in the crowd as Shawols sang along with their idols. And before they left the stage for the last time SHINee took some pictures with the crowd, including one that included the fan project; Before the show Shawols had secured permission to put colored papers with instructions on the seats of the orchestra section. The papers held up together formed “1 of 1” and were surrounded by green banners saying “Forever My 1 of 1” – the members wanted to get a picture with it as their final memory from their first ever North American tour.

Many, many, many thanks to SubKulture Entertainment for bringing SHINee to the USA for their first SHINee World North American concerts and allowing us to cover them, and of course to the members of SHINee for giving us such amazing performances. It’s certainly one that Shawols across America will never forget.

You can also check out our coverage of other SHINee World V North American stops, and stay tuned to Officially KMusic for all the latest updates on events, news, and more!

Kat. ¯\_(ツ)_/¯ Writer, Editor & Photographer. Born in San Fran, heart in London, roots in Norway, life in New York. I'm a life-long music lover, French Hornist, lowkey professional norae-banger, and lowerkey amateur beat maker. The KPop life claimed me in 2009 with 'Sorry Sorry,' and I never looked back. Hip Hop is my philosophy, SHINee, BTS, and BAP are my soul and VIXX are musical goals.