K-Exclusive: Sik-K Teams Up With HAON, Takes His Shirt Off, and Brings the ‘Party’ to Sydney 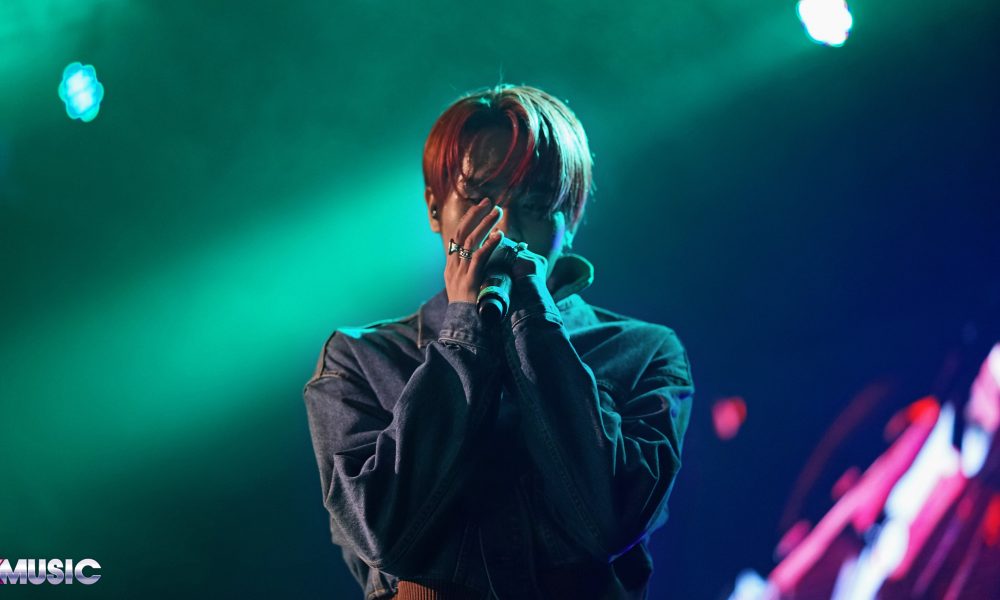 K-Exclusive: Sik-K Teams Up With HAON, Takes His Shirt Off, and Brings the ‘Party’ to Sydney

Sik-K (식케이) is many things: an avid user of autotune, an artist who cleverly straddles a fine line between rapping and singing, and a hopeless romantic. On a Sunday evening which many of us know to be as ‘rest day’, Sik-K donned his cool-guy heartbreaker look and confidently emerged onto stage at The Metro Theatre, Sydney. The H1GhR Music artist played over a dozen tracks spanning his entire career, making sure to reach both old fans and new.

This Sydney show marked the last of his world tour, with Sik-K performing at his absolute best and most humble, thanking his crew and his fans at every opportunity, while simultaneously granting us one of the most well structured concerts I’ve been to in recent memory.

Throughout the evening, Sik-K took the time and care to speak to his audience in both Korean and English. At many concerts, previous artists have tended to favour one language over another purely because of non-English speaking members or the comfort of speaking in their own native tongue, so it was a welcomed change of pace for Sik-K to cater to Korean and English-speaking fans.

To kick off the evening, Dj SMMT played a killer hip-hop set with bangers like ‘Old Town Road‘, ‘I Don’t Like‘, ‘Mo Bamba‘, and ‘Free Smoke‘. 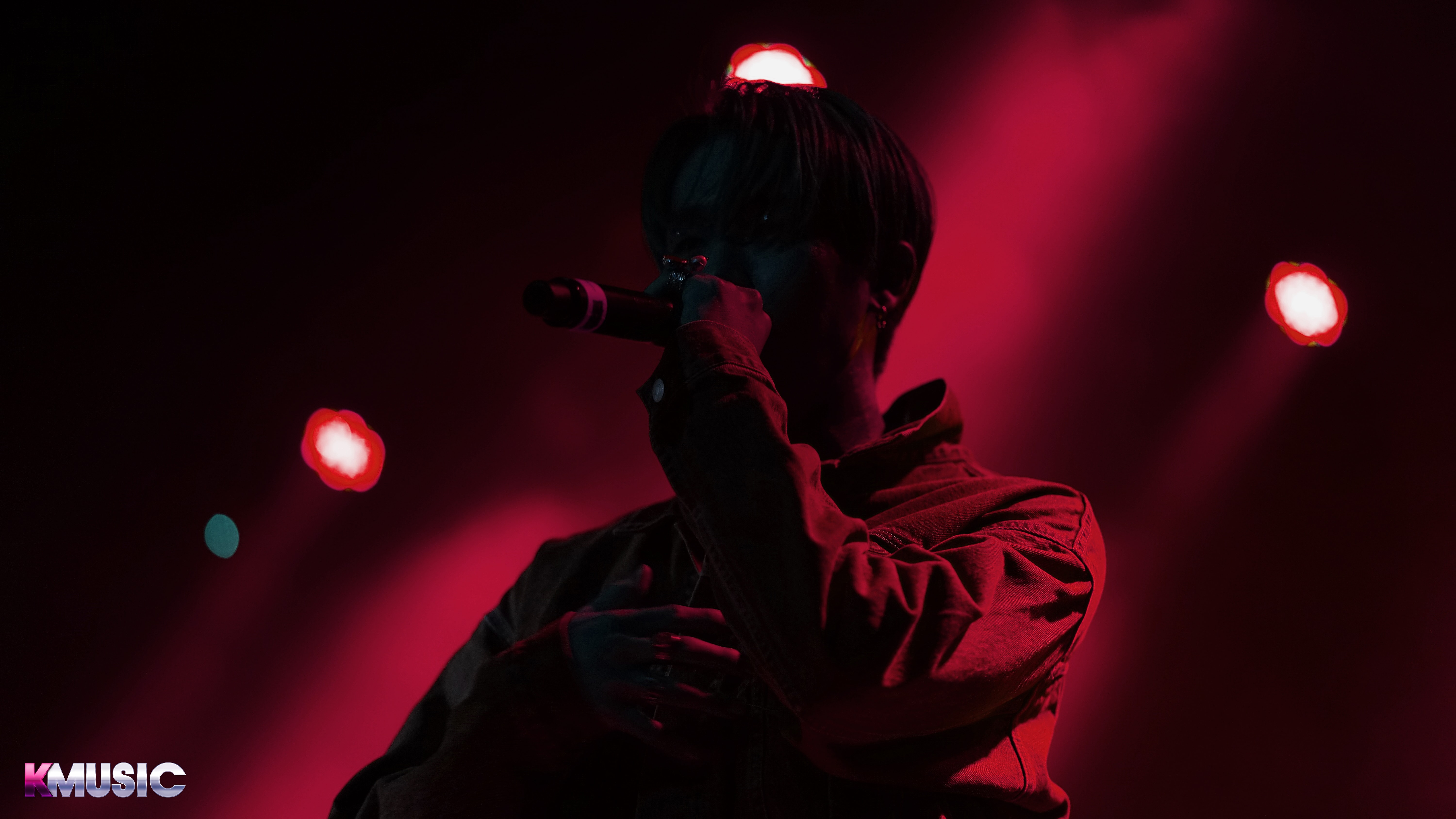 Just two songs in, Sik-K was already reaching for a bottle of water. Not for himself, but so that he could give his perspiring fans the much needed hydration they needed only 10 minutes into the concert. He stomped around the stage and jumps with an energetic charisma that literally fires up the room.

After kicking off with three tracks from his newest album ‘FL1P’, Sik-K gave us a chance to rest with a preface for his upcoming stage.

“If You f**ks with my old tunes, say f**k yeah”, Sik-K said to the audience. To which we responded with a resounding “f**k yes.”

Unsatisfied, Sik-K welcomed us to scream louder with another “f**k yeah”, before launching into his classic song, ‘Rendezvous‘.

Funnily enough, when preparing his next bottle of water to spray onto his fans, he first vigorously threw it onto the ground to get it half-empty, so that it would lightly spray and not drench his audience.

Throughout the evening, his song straddle energy and relaxation, a careful mix between club hits and soothing romance narratives.

At the sight of his adoring fans, Sik-K was humbled and grateful.

“You guys are crazy”, Sik-K complimented.

“Any Spanish or Latino people here? Do we have any Spanish here?” Little did Sik-K know that Australia isn’t as populated with Spanish people as he thought.

To sing us as many songs as he could, Sik-K warned us that he wouldn’t be talking much.

He wrapped up his set wiht ‘Mi Casa Es Tu Casa‘, ‘xanax‘, ‘SORRY (1000)‘, ‘Addict‘, and ‘Fire‘. He skipped across the stage like a gazelle with all the enthusiasm of someone that truly loves performing. 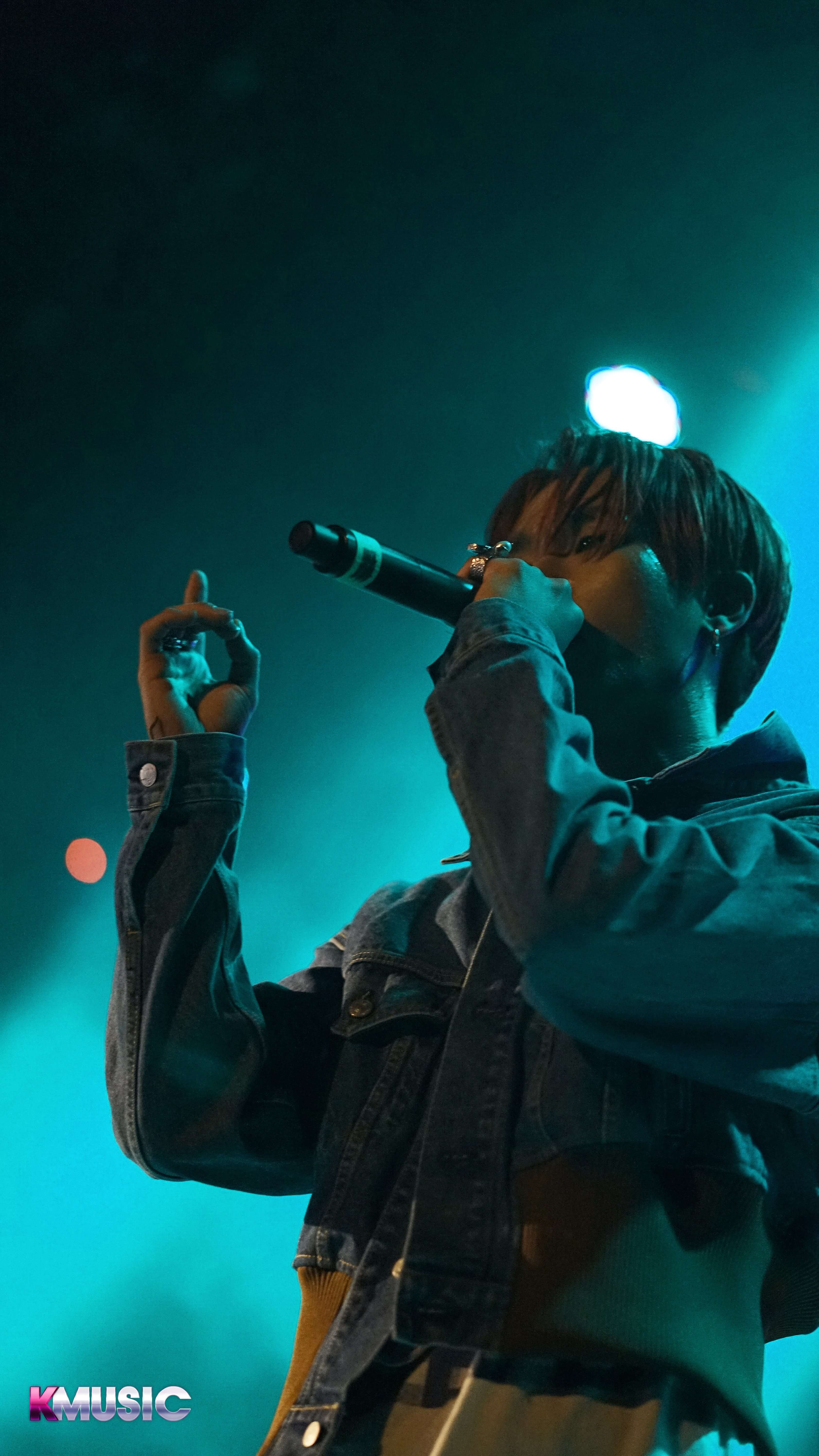 Following his set, Sik-K spared no time and gave no one the chance to leave before bringing fellow H1GHR Music artist, HAON (김하온) onto the stage.

“Those who f**ks with Sik-K, say hell yeah!” Sik-K hyped the crowd.

“Do you know who I brought from Seoul, South Korea? The rap prince himself, HAON“.

Besides the abundance of energy that only comes from youth, it’s hard to believe that HAON is only 18 years old. Straight from High School Rapper 2, HAON made sure to ask the Sik-K obsessed audience if they knew who he was.

Mid-set, one fan threw a Pikachu toy towards HAON in adoration.

HAON didn’t forget to shout out his label neither.

“When I say higher, you say music. Alright, everybody!”

HAON then launched into ‘WHACHUWANT’.

At the end of HAON’s set, any normal concert would have been over. A DJ set, SiK-K, and HAON… What else could you ask for? The answer: a second Sik-K set.

Out of nowhere, Sik-K strides back onto stage, casually thanking Dj SMMT and encouraging the Dj to play through a few tracks.

The fans’ love poured onto stage with each new song, panties thrown onto the stage for Sik-K to count. A guy screamed in joy after Sik-K threw him his sweaty towel, rich in Sik-K’s water juices.

Whenever a silent moment came, fans chanted “Take it off, take it off”.

“Now, who can dance better than me?” Sik-K questioned.

As ‘Party’, arguably one of my favourite songs began to play, Sik-K added “For real, this is my last song.” 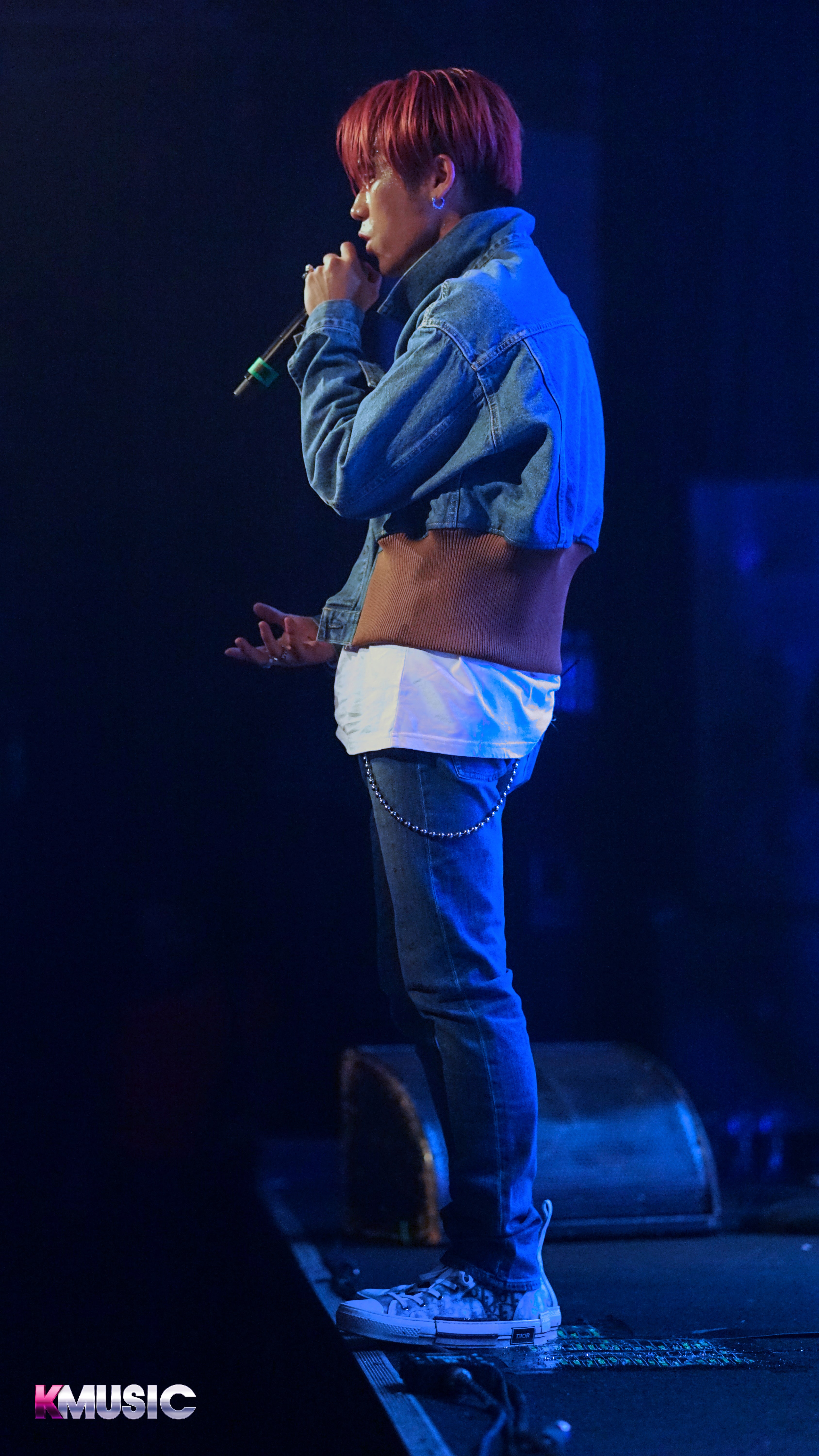 Sik-K is totally a liar, because he continued to amaze us with performances of ‘Skip and Kiss‘, ‘YeLowS Gang‘, ‘Xibal‘, and ‘Alcohol‘. Oh, and his shirt came off too.

Next, HAON returned to the stage and Sik-K invited everyone including the staff to jump along with him with one final performance of ‘Party‘.

Jumping in unison, it was beautiful to see the amount of collaboration and joy on stage between Sik-K and HAON. When supporting acts feature on stage, they tend to add nothing and function as totally separate performance. The handshakes, hugs, and synchronised jumping all made for a beautiful concert that I couldn’t have been more lucky to see.

At the end of the night, Sik-K revelled in the love as he high fived as many fans as he could, moving through the front and sides of the crowd making for hundreds of hans that won’t be washed for quite some time.

FL1P World Tour in Sydney was brought to you by kohai and H1GHR Music at The Metro Theatre. The event was held in Sydney, Australia. 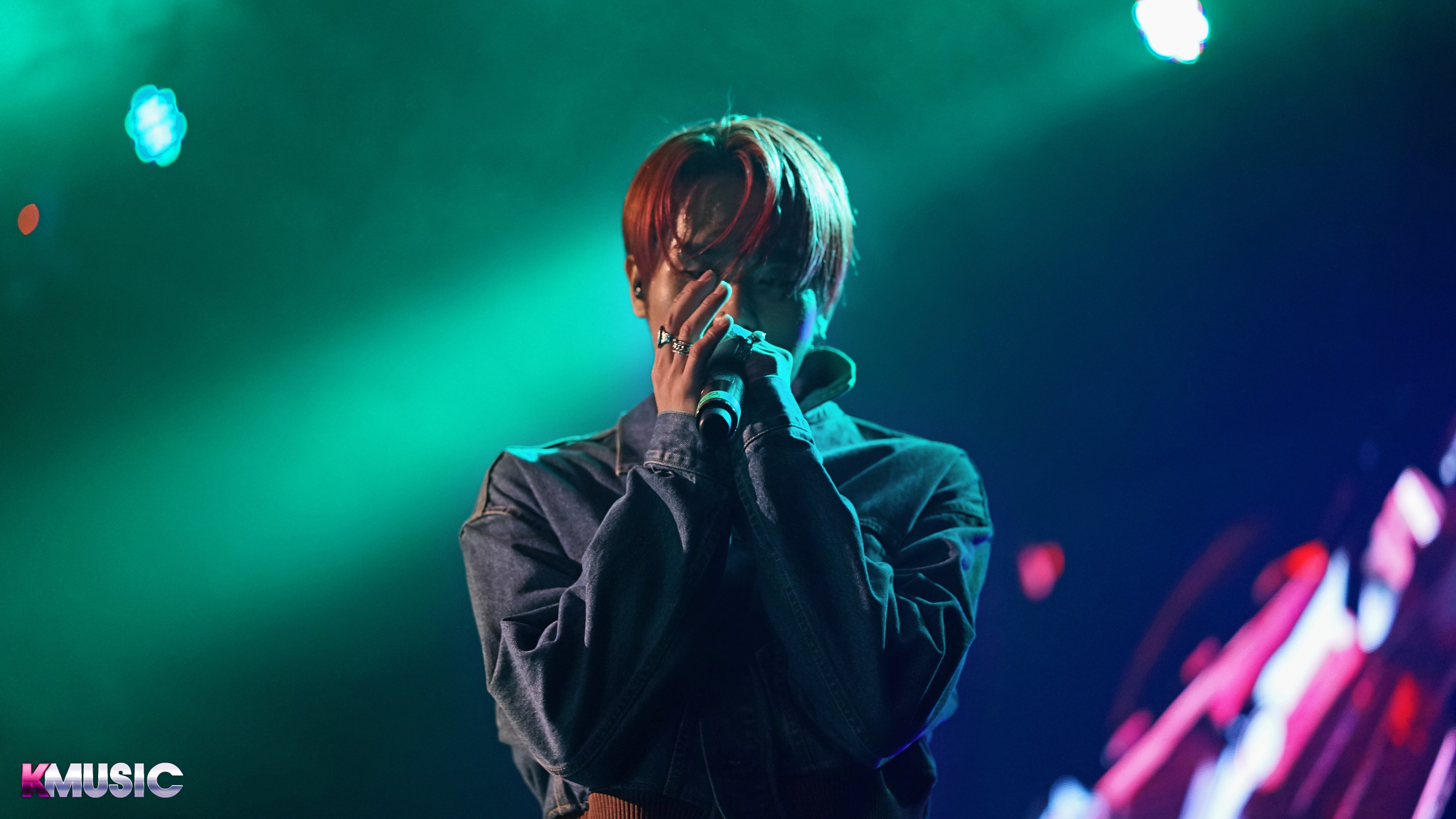 Scroll for more
Tap
K-Exclusive: SUPERBEE Loves Lil Wayne and Wants to Collaborate with XXXTentacion | Interview
K-EXCLUSIVE: IMFACT made a huge impact on us in Germany
Scroll
Loading Comments...