For most Sydney-siders, Sunday February 24 was the day to avoid Milson’s Point and Luna Park. The unloved slew of trackwork had struck Milson’s Point, making travel only achievable by bus.

But for thousands of Stray Kids‘ fans (known as STAY), February 24 2019 would remain etched in their mind as one of the most emotional Korean-pop music concerts ever in Sydney. 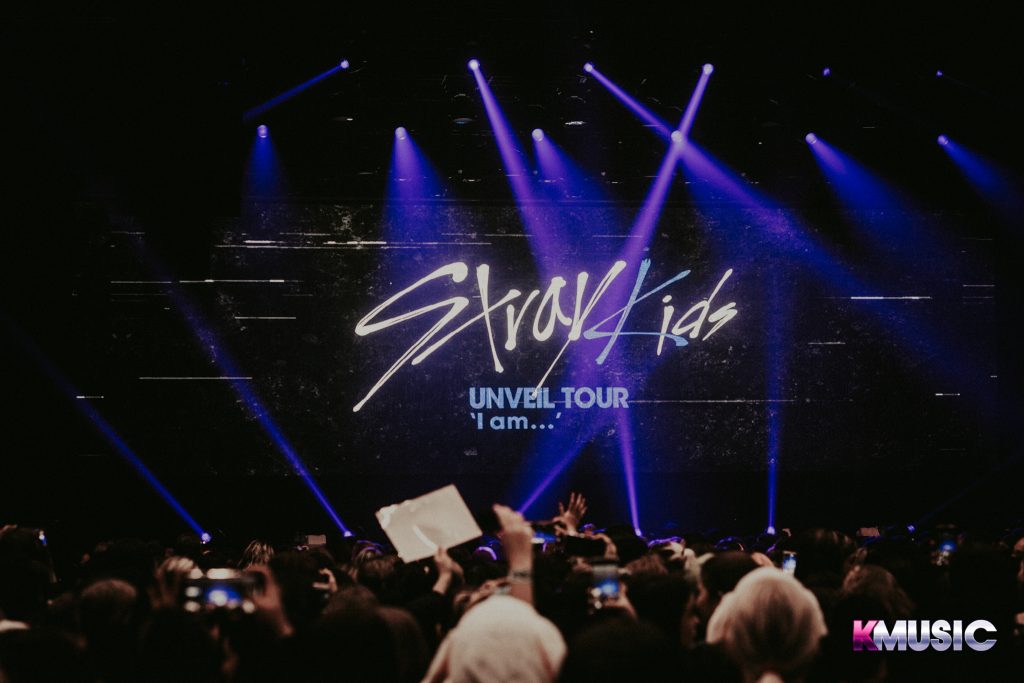 On the outside, the Stray Kids UNVEIL TOUR ‘I Am…’ was just like any other world tour. There were locations spread out across the world, merchandise to be sold and legions of fans awaiting the groups’ arrival.

But on the inside, the nine member boy group knew that coming to Sydney and Melbourne was no ordinary trip to a new country: it would be a homecoming of sorts.

For Felix and leader Bang Chan, the Sydney show may have been one of the most important and difficult performances of their lives. Felix was born in Sydney and Bang Chan too moved to Sydney at a young age.

Bang Chan joined JYP Entertainment in 2010 after passing his audition in Australia, grinding it out for almost a decade before debuting with the boys he now calls his ‘brothers’. He was the only one to pass out of 800 people.

Coming back to Sydney, fame hit Bang Chan like a smack on the head, shouting out ‘thank you’ and ‘sorry’ to his fans throughout the show. He was grateful to return to a place where he could express himself comfortable in his Aussie accent, and yet he was apologetic to his fans and family.

“I always missed Australia… My family is here as well. I just want to say sorry for being so far from home for so long,” Bang Chan said.

Tears burst out of him slowly. Then he choked up. And then they got up on stage and performed again.

To start off, the boys performed their debut song, ‘Hellevator‘. A burst of reds and blacks emerged from the screen as the boys vaulted onto the stage. 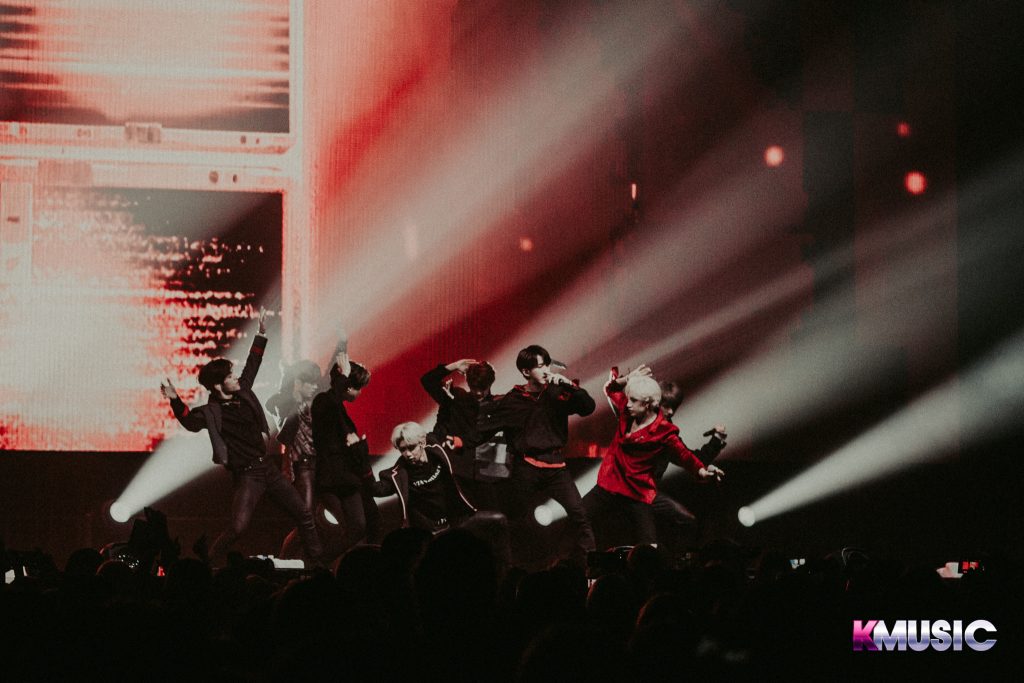 After hit tracks ‘NOT!‘, ‘Awaken‘, ‘District 9‘, and ‘Mirror‘, the 9 boys took a rest to tell us the story behind their most recent albums. There were 3 in the series: ‘I Am NOT‘, ‘I Am WHO‘, and ‘I Am YOU‘, reflecting the epitome of an identity crisis. Each album captures the Stray Kids journey as they and their STAY fans try to find themselves. They are never the same, constantly changing, looking at themselves in the mirror and questioning what may come next.

The boys introduced themselves and Bang Chan again reiterated “I am so glad to be back in my hometown. Feels like a dream to be back here.”

The boys then encouraged us to find ourselves in the ‘Mirror‘, before a beautifully haunting dance section took place, in which the boys danced against a hollow mirror frame and reflected each other’s movements.

Next followed the ‘I Am WHO‘ section of the evening, the boys singing ‘WHO?‘, ‘Insomnia‘, and ‘Voices‘. 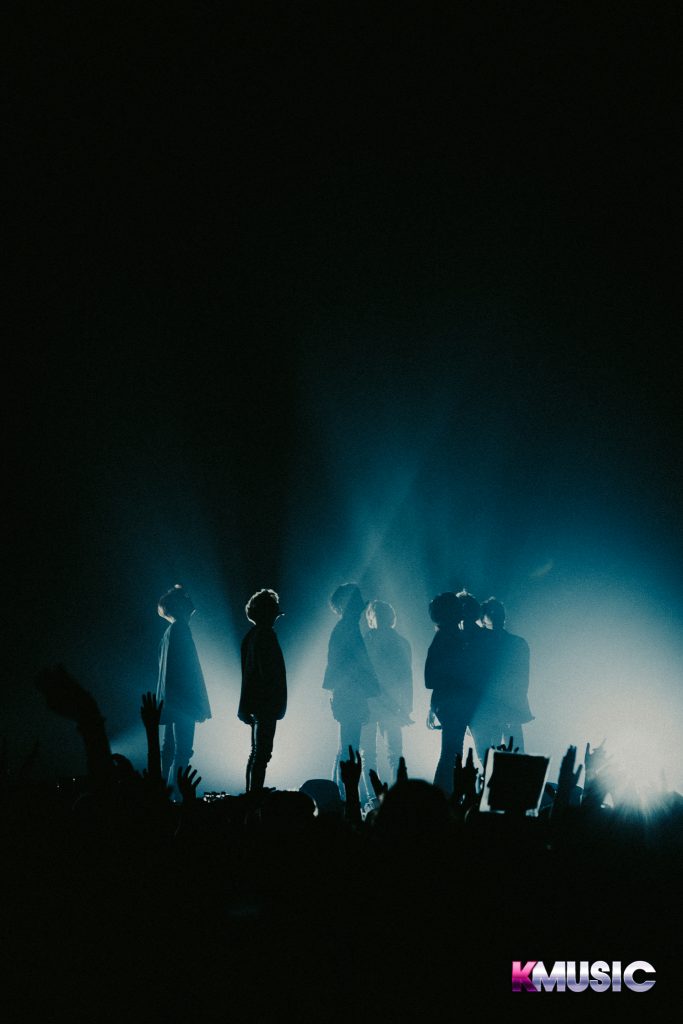 The boys introduced ‘Voices‘ by saying: “We know that you guys comment on our videos. In fact, we read them all. When we see you guys telling us about the struggles in your lives, we think about ourselves too. Those voices in your head, step out of them and go your own way.”

After a few goes of ‘Aussie Aussie Aussie, oi oi oi,’ the audience was ready for the next song, Stray Kids’ most popular track yet.

They asked us to sing along to the phrase ‘nanananana.’ The opening noise for ‘My Pace,’ each member sung their way through the intro, from whispers to Hyunjin‘s sexy voice. With over 57 million views on Facebook, it’s no surprise that ‘My Pace‘ is Stray Kids‘ biggest track.

The final section of the ‘I Am‘ series led to the highlight track ‘I Am You,’ sung with such clarity that I felt like I was right next to them. Streamers too launched from the sides of Big Top.

“I want to thank JYP Entertainment for making this happen. And STAY, I want to thank you all for being here. You guys can cry too, because Stray Kids are here.”

Felix too farewelled us with his own story about his journey. Born in Sydney, he left everything behind to pursue his career in South Korea. He looked to Bang Chan like a mentor.

“I’m glad I had someone to lead me and show me how to do things right. He (Bang Chan) taught me to become a creative person and a star. I finally know what it’s like to have a brother now. And not just 1, but 8 brothers,” Felix said.

“Chan always said to me, ‘don’t let me down,’ There were so many downs, I even wanted to give up. I couldn’t have done it without the other members,” Felix concluded.

Seungmin as well was the most apologetic for his injuries. Unable to dance, he spent the show singing whilst seated on a chair to the far left of the stage.

“I promise to show a better performance in a much healthier condition,” Seungmin said.

“I know we’re lacking a lot too. We promise to always go harder. When we return, we’ll be a better group,” Bang Chan said.

The Stray Kids farewell may have been the longest goodbye I’ve attended, and yet I think it elevated the performances beyond showmanship and into humanity. The other Korean members may have not understood all that Felix and Bang Chan had to say, but their understanding, patience, and together endured hardships are the ties that bind them.

There’s a special honesty you feel when performers go off script, and it’s often because they have to get something off their chest. An emotion, a truth, a longing. I left the ‘Stray Kids Unveil Tour ‘I Am…‘ a better man, someone that wanted to, in Bang Chan’s words – “make the impossible possible.” 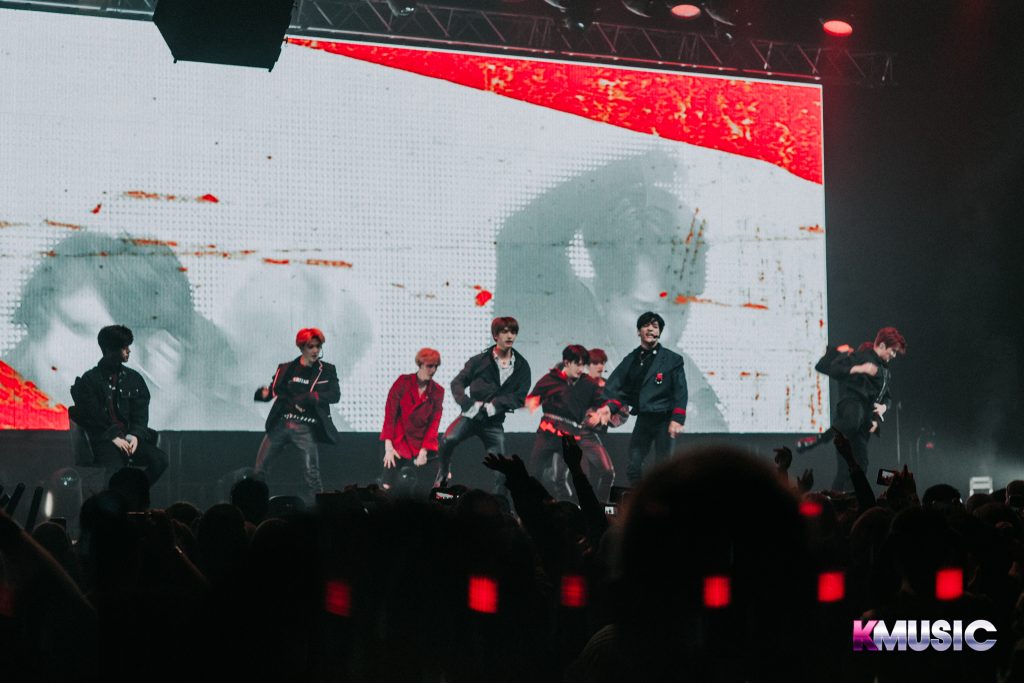 JYP Entertainment too, showed a massive  amount of preparation for the tour’s production, with beautiful and captivating graphics that lit up every and song and elevated each performance. Unlike some concerts, the graphics really complimented the movements and energy of the boys.

To wrap up the emotional rollercoaster, Stray Kids gave us an incredible performance that in the end, was more than what fans expected. And yet, they still promised to give us more.

They came to the stage one last time for ‘Get Cool‘, ‘YAYAYA‘, and ‘Grow Up‘.

The Stray Kids UNVEIL TOUR ‘I am…’ was brought to you by  JYP Entertainmnent, MyMusicTaste, and Asiana Airlines at Luna Park Big Top Sydney. The event was held in Sydney, Australia. 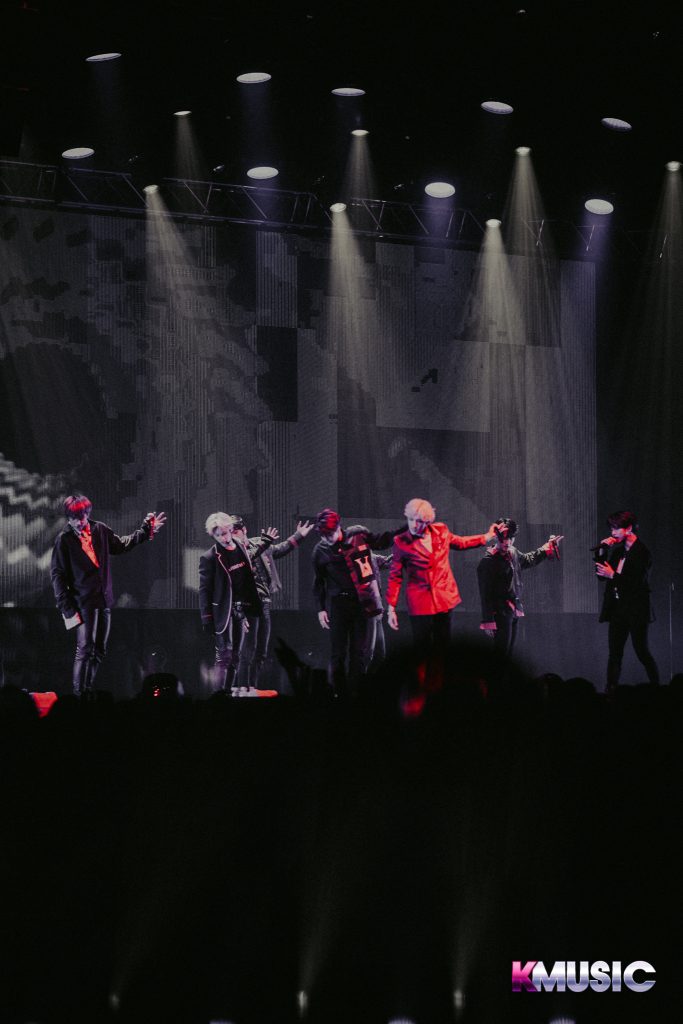 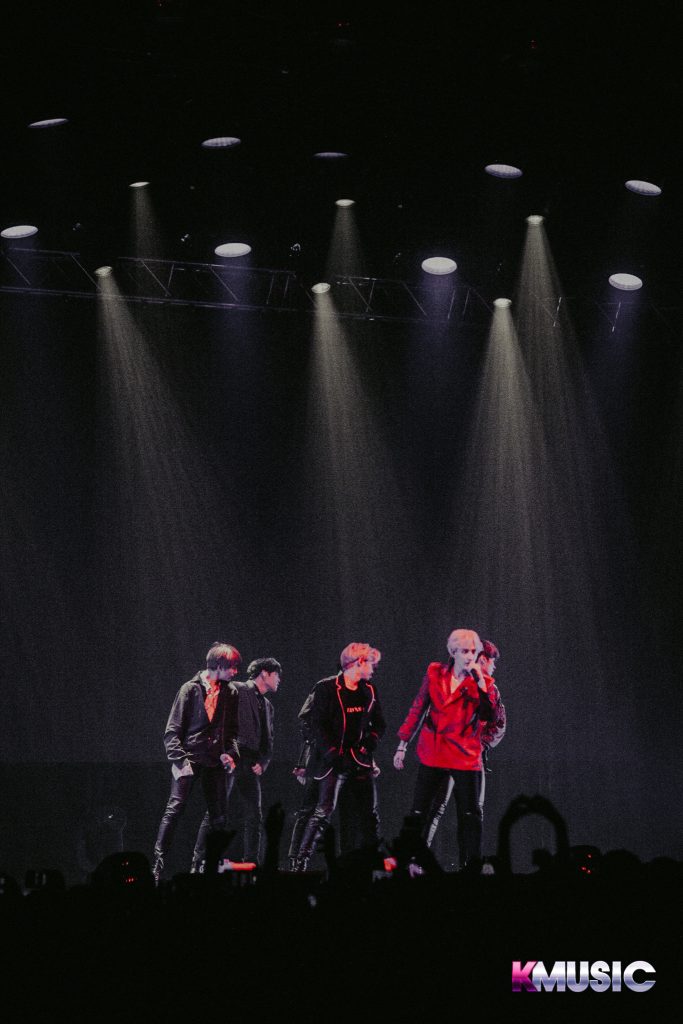 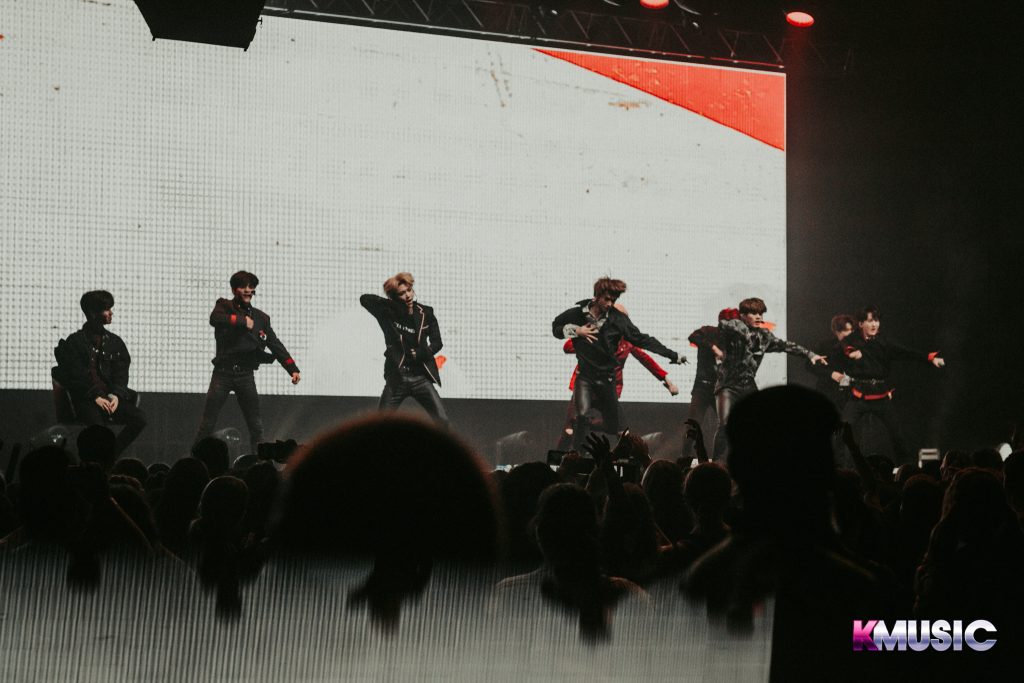 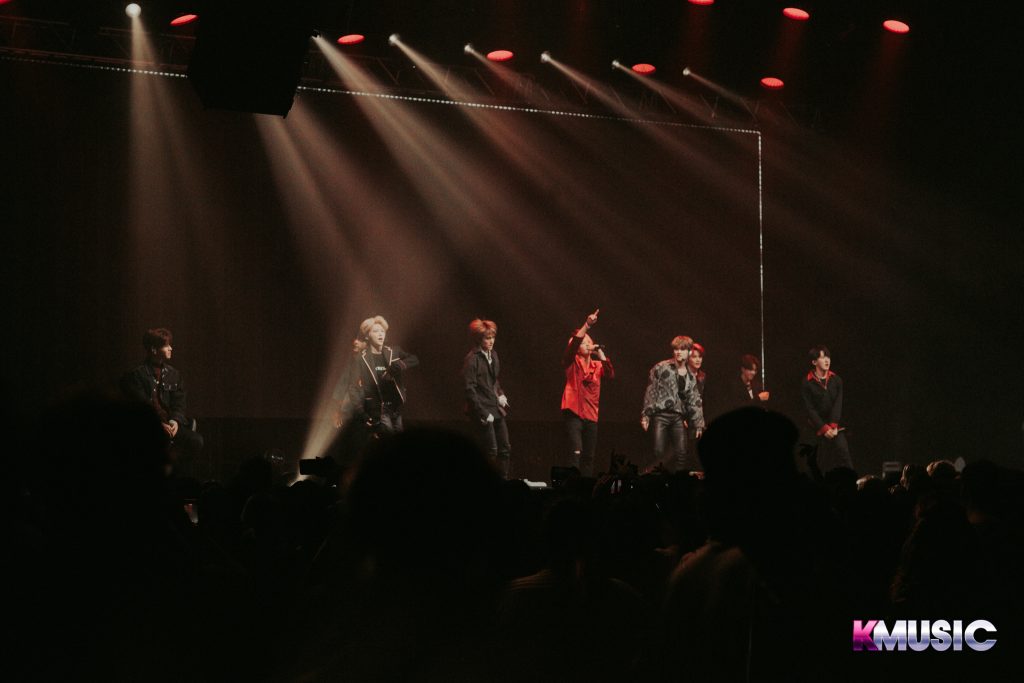 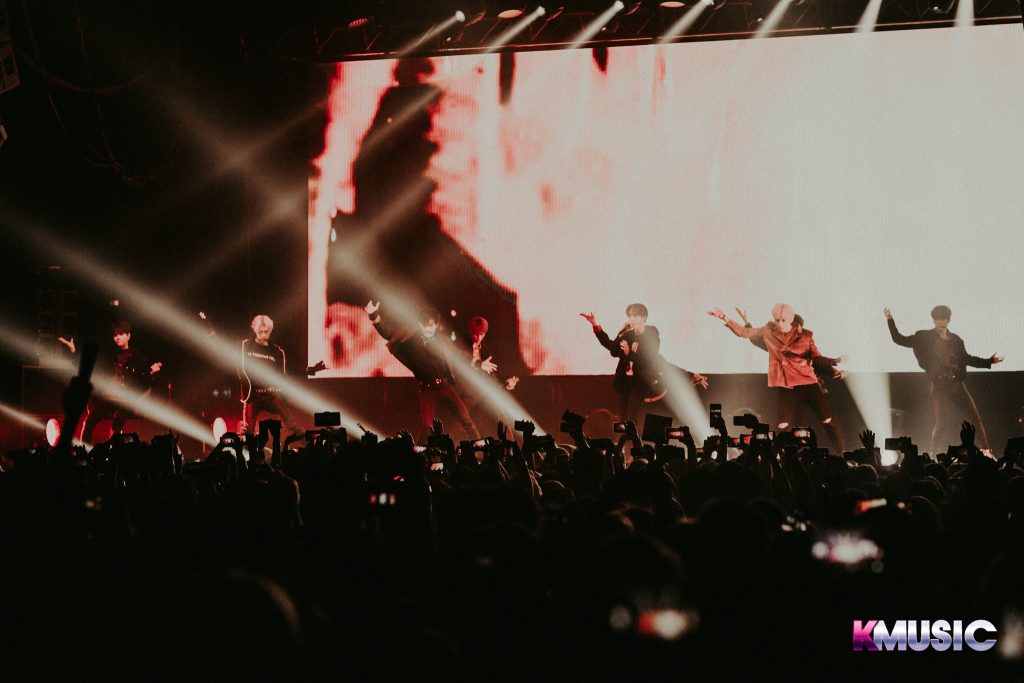 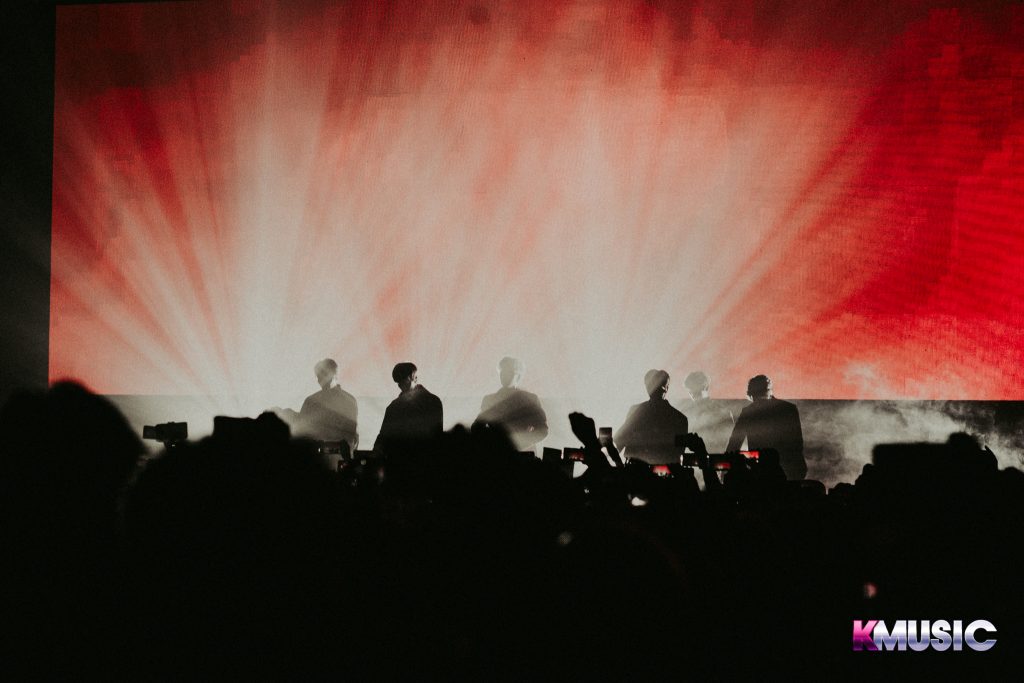