“Don’t change your hearts. Super Junior is forever!” exclaimed leader Leeteuk to some 8,000 ecstatic fans at the SUPER SHOW 6, where members returned to the Singapore Indoor Stadium on 1 May 2015 after almost two years.

Undisputedly one of the most representative groups in KPOP, members Leeteuk, Heechul, Donghae, Kangin, Eunhyuk, Siwon, Ryeowook and Kyuhyun took the stage by storm despite missing Shindong, Yesung and Sungmin who are currently on hiatus serving the military. The 3.5-hour concert was packed with highlights and perfectly sculpted by storylines shown in the countless videos that interspersed the show. Ten years since debut, Super Junior also presented a more mature side, alongside solid chemistry and immense gratitude for E.L.Fs.

Opening act was filled with popular hits ‘Twins’, ‘Bonamana’ and ‘Sorry Sorry’. At one point, Heechul was seen immersed with some solo drumming at the centre elevated stage and flipping those golden locks of his! Another juncture, dance machine Eunhyuk got his hands ‘tied up’ and was ‘hanging’ while performing a solo rapping special. The charismatic boys went on with ‘Midnight Blues’, ‘Mr Simple’, and had the crowd gasping for air with some sizzling hot scenes with the female dancers during ‘She Wants It’. 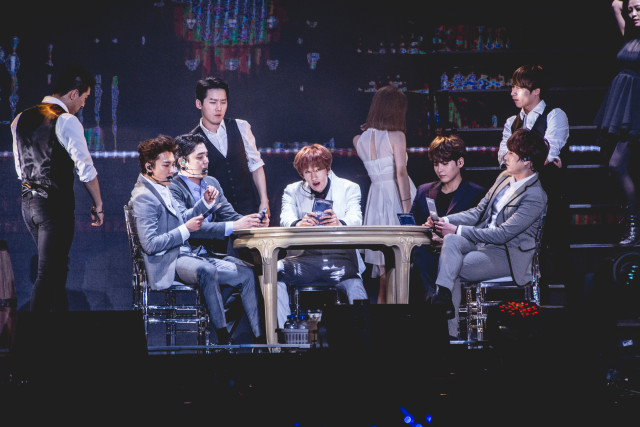 Veteran idols and popular hosts indeed, it was extremely entertaining to watch Super Junior even if members were just doing their individual introductions. There was plenty of ‘English time’ with Heechul dishing out various vocabularies and causing uproar of laughter when he went “tonight I go your room”. Burdened Eunhyuk also addressed the crowd in English, in fact, rather fluently, but cracked up the crowd when he kept correcting himself from saying “tonight” since the performance was in the afternoon. On the other hand, maknae Kyuhyun impressed the crowd with his remarkable Chinese and almost got undressed by the playful hyungs when he professed “Super Junior is very sexy”. 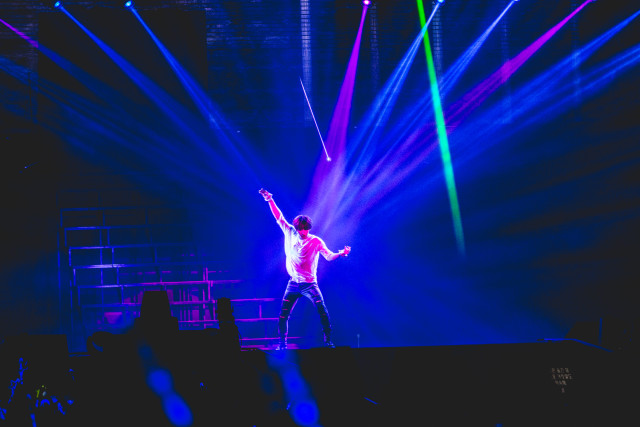 The suave boys are super sexy when they perform ballads, and serenade the stadium with their soulful voices. Following a touching video of the boys’ younger selves and their then blossoming loves came the sentimental songs ‘Don’t Leave Me’, ‘Island’, ‘U’ and ‘Evanesce’. And the sweet melody of ‘This is Love’ was so hauntingly beautiful! 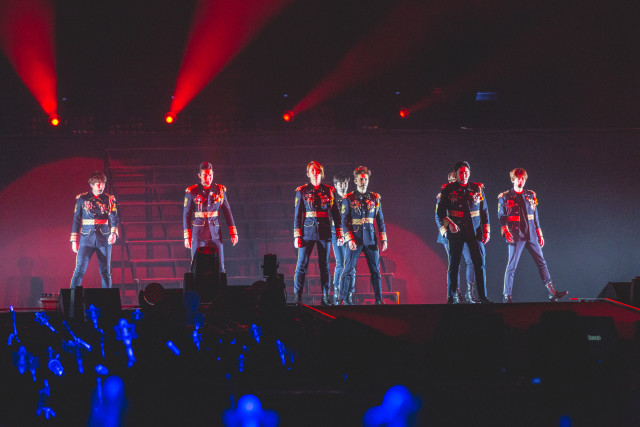 Highlights of the night that followed would be the thrilling solo acts by each member and the special stages with Super Junior-M members Henry and Zhou Mi. The boys even had a Frozen contest, with some hilarious cross-dress moments in Elsa costumes! 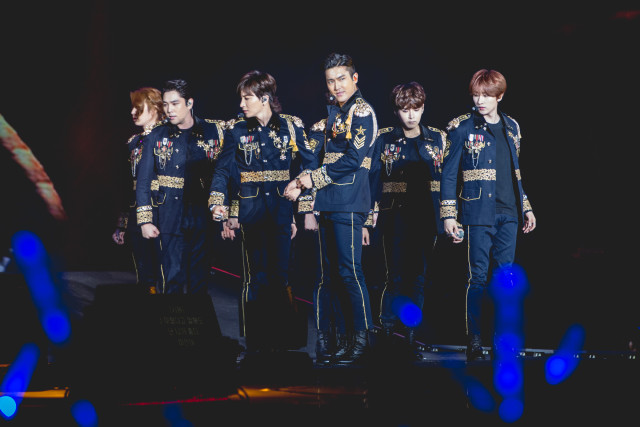 Introduced through a video showing the making of the song ‘My Thoughts, Your Memories’ that featured TVXQ’s Changmin, Kyuhyun enthralled fans with the self-composed solo before surprising everyone with the Chinese version of ‘At Gwanghwamun’. Kangin lit up the stadium with ‘Heartbreak’ while Ryeowook did a cover of Jay Chou’s ‘Qi Li Xiang’. 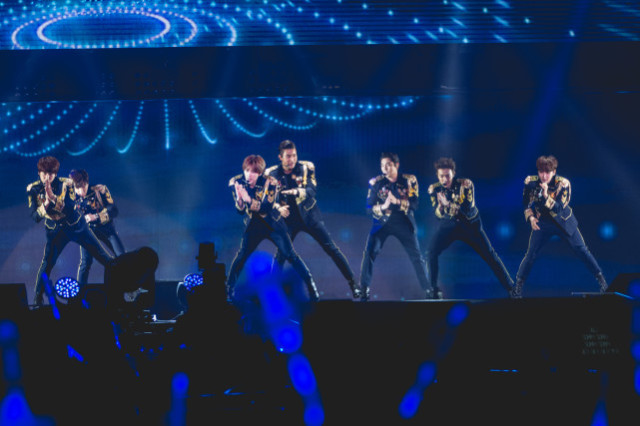 Unlike SUPER SHOW 6 in other cities, Siwon performed ‘Lost Stars’ in Singapore in Leeteuk’s place. “I’m excited. I have not tried it before but I love the song very much” said the singer-actor, who appeared onstage together with his hyung Leeteuk. Instead, Leeteuk stirred emotions with a passionate cover of Huh Gak’s ‘Hello’. D&E duo then completed the session with their sexy body waves during ‘1+1=Love’ and ‘Growing Pains’.

Henry was adorable humming to ‘Trap’ when Leeteuk said that they will sing a special song for Singapore. But his hyungs were quick to ‘brush him aside’ and exclaimed “No! We will do a better song than that.” Well, fans knew they were in for a treat of the live performance ‘Swing’ when Henry and Zhou Mi joined the boys on stage and this was followed by ‘A-Oh!’.

The two Super Junior-M members expressed their gratefulness to be able to join the Singapore leg of the performance, especially after coming back with their latest albums. Henry got the crowd going with ‘Fantastic’ and his violin cover of Michael Jackson‘s ‘Smooth Criminal’. He even moonwalked! Zhou Mi enticed the crowd with his sleek dance moves for ‘Rewind’, and fans just could not stop chanting “Stop! Rewind!’ like a mantra.

Atmosphere reached a new high when Super News newscaster Shindong appeared on screen declaring a Frozen contest among the boys. Notable sights were Big Elsa Kyuhyun’s humongous hair, pretty Elsa Sapphire Blue Leeteuk’s confession that “I have been dressing like a man for 32 years” followed by a wardrobe malfunction where Heechul (very pretty himself) had to help Teuk adjust his tube top that almost fell off! Trot ‘Rokuko’ in Elsa getups was very entertaining. 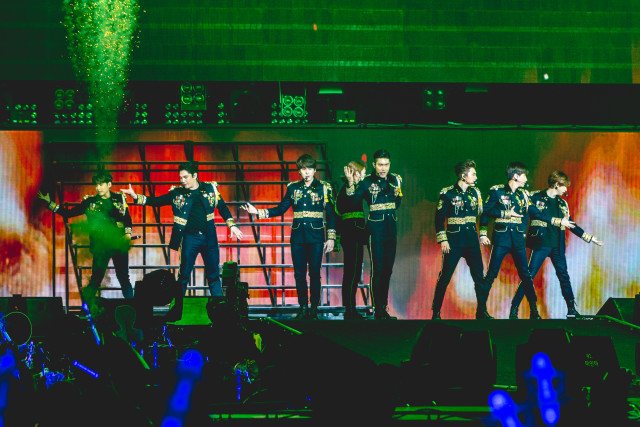 One of the most touching moments was probably when Shindong’s recorded solo performance of ‘Don’t Forget’ played on screen. With such meaningful lyrics, leader Leeteuk remarked “From what I see, there are a lot of guys in the audience and a lot of families too. Let’s be together for 10 more years and grow old together!” before quipping like a true diva, “I’m sorry but I won’t get old.”

All in all, there were about 35 songs? After a medley of ‘Shirt’, ‘Rockstar’, ‘Let’s Dance’ and ‘Too Many beautiful girls’, the boys came back with an encore of ‘Mamacita’, ‘From U’, and atmosphere peaked when everyone stood up for the last of the night ‘Haru’.

Bidding goodbye, members had a lot to say to all their E.L.Fs who have been with them for the past decade. Leeteuk excited everyone with the possibility of SUPER SHOW 7, “A lot of members are in army, and there will be a lot of changes. But Super Junior is forever!”

Eunhyuk called out, “If you make a wish upon me. It will all come true. I wish for SUPER SHOW 7. Thank you for always being with us whether it’s something good or bad. Something very sad happened me. But when I perform in front of you guys, I gained lots of strength.”

Heechul revealed that he might be back in Singapore very soon while Kyuhyun, in a mixture of English and Chinese, thanked everyone for their “fighting attitude” and hope to return “with better performance and (to be) more handsome.”

For E.L.Fs, Super Junior will be forever. Singapore looks forward to SUPER SHOW 7!

Officially KMUSIC would like to thank ONE Production, SM Entertainment and DREAM MAKER ENTERTAINMENT for the invitation.