So the 9th Annual R16 has creeped up upon us before we even realized! What is R16 you ask!??? It is the highly anticipated World B-boy Masters Championships taking place started taking place yesterday from September 12 to 13 at Jangchung Gymnasium in Seoul!

As one of the most internationally celebrated and revered B-Boy tournaments in the world and with over an average of over 3,000 audience members, this festival is not one to be overlooked. Dancers and performers from “as far and wide as the US to Nepal to Kazakhstan and El Salvador” are gathered this weekend to put on a performance of a lifetime.

With a revised team format this year that will be similar to the Olympics format, each crew was composed of the 7 best dancers from the region to represent each country as a “nation.” They will all be competing to be the crowned champions of the world while also hoping to claim the over $35,000 in prize money.

Saturday included the main completion at Jangchung Gymnasium at 6pm, which featured the Solo Battle Competition with 16 B-boys, 8 Poppers, and 8 Lockers rotating the stage for an evening of 1 vs 1 battles. This included awesome performances by Wacking Assassin from Korea and the Ill-Abilities that are from the US!

Today, Sunday the 13’s events start at 6pm at Jangchung Gymnasium again, and that is when the national teams will be competing to determine the tournament bracket for the main event crew battles. In between battles Lock’N’Lol , Gamblerz, Khan & Moon, Dok2, and The Quiett will be performing! Who would want to miss out on this?!

With judges including some of the most legendary talents in the dance world like Kujo (USA), Flo Master (USA), Katsu (Japan), Ducky (Korea), Bootuz (Russia), Hugo (USA), Walid (France), Hoan (Korea), Tony GoGo (USA) and Crazy Sun (Korea), who would want to question the verdicts? Beats and rhythms will be provided by DJ Skeme Richards from USA, DJ Light and Togaceee from Japan, and DJ Spray and Funnyman from Korea “with live music embellishing the soundtrack of the competition by the Warsaw Band from Poland.”

The gates open at 4pm and kicks off with a Cypher Zone sponsored by Puma, a graffiti exhibition, and even a barber shop for event goers to get a quick fade or just some touch ups!

The R16 Korea World Final After Party will be commenced from 10PM to 5AM at The A located at the Artnouveau City Hotel in Gangnam. It will also feature live acts from artists Dok2 and The Quiett. 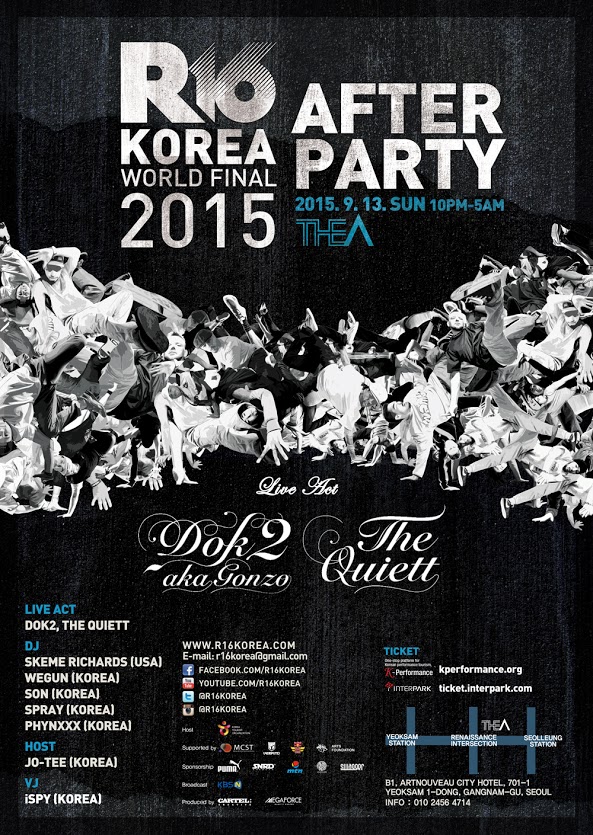 While none of us here at K-Music want to miss out on this awesome event—most of us, like you, are not able to attend this event, so please look forward to our coverage of this two day festival!!  It is definitely one not to be missed by any true dance lovers!