K-EXCLUSIVE: Wanna One World Tour “ONE: THE WORLD” In Singapore

K-EXCLUSIVE: Wanna One World Tour “ONE: THE WORLD” In Singapore

All wannables wanted to do was to spend just one more day from eternity with Wanna One and that was what happened during their first world tour ONE: THE WORLD held at the Singapore Indoor Stadium on Friday, 13th July. It was their 2nd visit to Singapore after their sold out fanmeeting Wanna Be Loved in September last year. 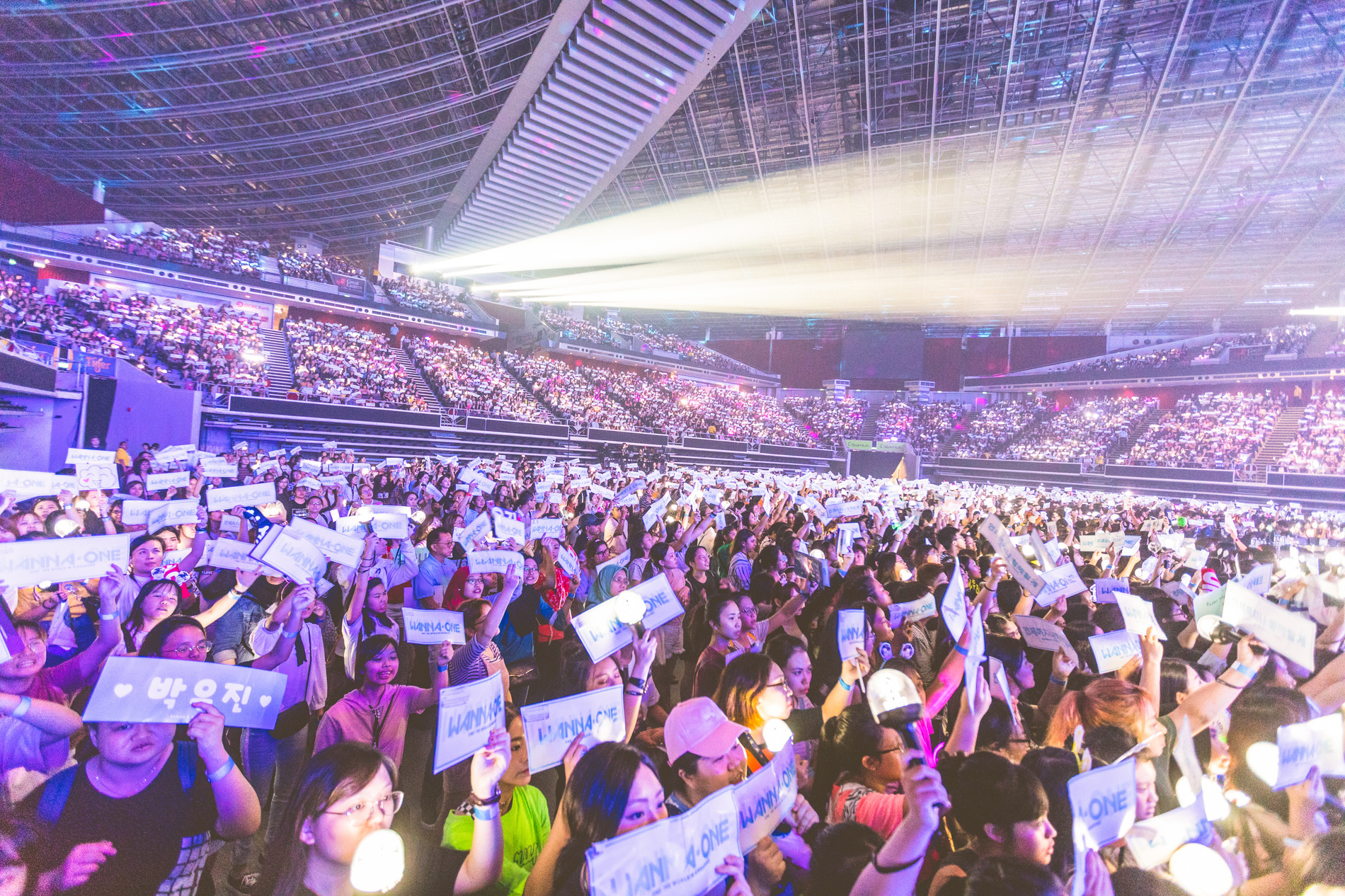 With the release of their first special album 1÷x=1 (Undivided) in June, Wanna One was able to show their musicality in different genres through multiple units and are set to perform their unit songs during the world tour. They will be touring in 14 countries, with Singapore being their 2nd Asia stop. 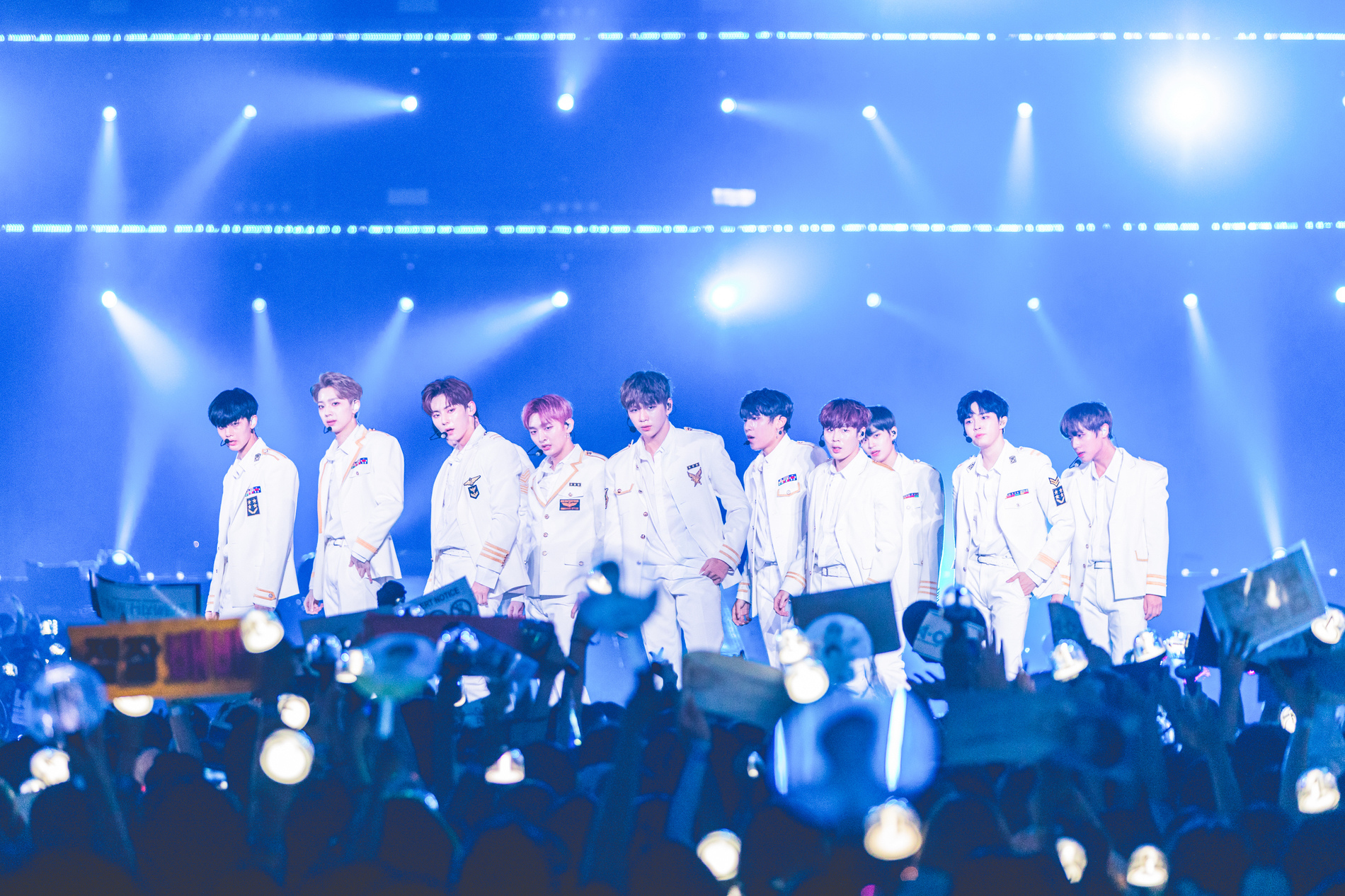 The night started with a dazzling light show counting down the seconds to the opening of the show and the LED screen flashed the following words ‘One Sound. One Heart. One Dream. We are all here to be one. Welcome to One the World’. An opening VCR was played showing snippets of all their music videos and the 11 members of Wanna One finally made their entrance on stage in white suits. They opened the show with familiar tracks ‘Burn It Up’, ‘Never’ and ‘Energetic’.

They continued to swoon the fans with a solo blindfolded dance by Minhyun and a charismatic solo dance by Jinyoung. Next up were ‘11’ performed by unit No.1 (Jihoon, Jinyoung and Guanlin) which made the whole stadium felt hotter than a summer and ‘Forever and A Day’ performed by unit Lean On Me (Jisung, Minhyun and Sungwoon) who serenaded the fans with their sweet vocals.

A VCR was played showing Jaehwan in a bar, Jihoon in a study, Guanlin trying on a suit and Minhyun holding a bouquet infront of a car. Woojin and Jihoon proceeded to make an explosive appearance with their dance and Wanna One continued the performance with their hottest title track ‘Boomerang’.

Jisung, the leader, started the opening talk by asking the fans in the standing pens to move back a step for their own safety with a cute ‘please’. Once the fans had settled in, the members did their group greeting “All I Wanna Do! Wanna One! Hi We are Wanna One”.

Jihoon asked if the fans missed them and did a heart, which left the crowd screaming in delight. The members continued with their solo introductions starting from Guanlin, Seongwu, Jihoon, Daehwi, Jinyoung, Daniel, Jisung, Sungwoon, Jaehwan, Woojin and Minhyun.

Jisung mentioned that it was their first time holding a full fledge concert in Singapore and Jaehwan said they have prepared so much for the night’s show. Sungwoon also sang a bit of ‘Forever and A Day’ and was pleased to hear the fans singing along.

Jinyoung suggested moving closer to the fans and the members went to the extended stage to make sure that everyone could get a better glimpse of them. Daniel continued to hype the crowd by asking how loud their screams can be. They heated up the night with a sexy number ‘Day by Day’ and told the fans “I miss you so much” with ‘Beautiful’. Everyone was left mesmerized by Daniel’s dance break at the end of the song.

A VCR of Seongwu, Daniel, Jinyoung and Sungwoon facing a white door was shown with Daniel saying, “I’ll see you in my dreams” as the door closes. Jaehwan treated the fans to a feast for the ears as he sang to ‘I’ll Remember 너의 이름을’ and the other members made their way to the stage to perform the song together. They continued with an acoustic version of ‘I Wanna Have’ as a disco ball descended to the extended stage, illuminating the whole stadium. During their track ‘Always’ from Produce 101 Season 2 Finale, everyone in the stadium raised their banners which said, “I’ll be with you forever” in Korean. 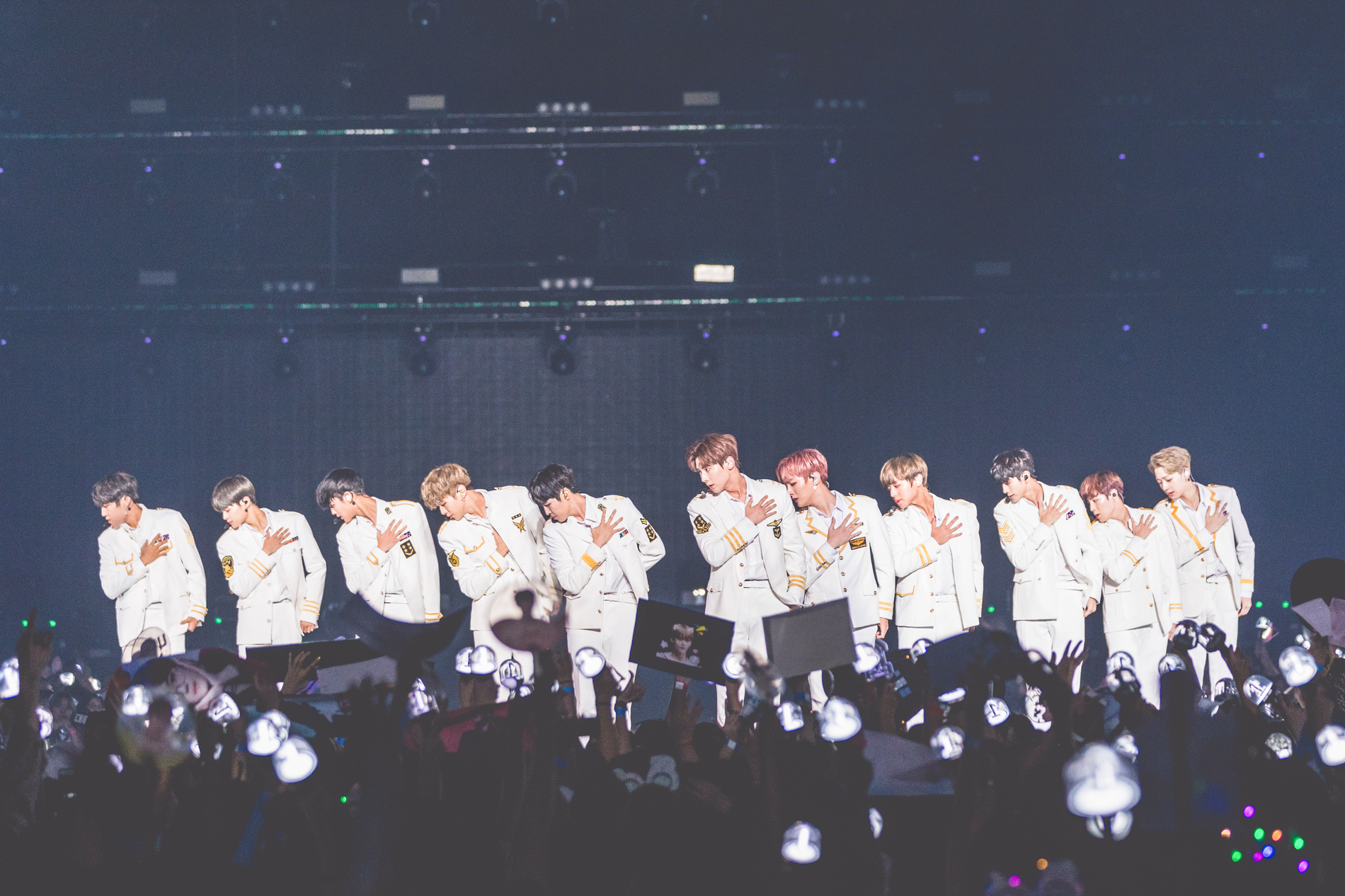 To add on to the exciting night, the members decided to act out three scenarios, which left the fans gasping for air after a long burst of laughter. The first scenario was apologizing to their girlfriend who is angry with them. The second scenario was expressing the frequently used singlish saying “so shiok” after enjoying a cold drink. The third scenario was showing their reaction after eating Singapore’s famous chilli crab and exclaiming “damn nice”.

Minhyun commented that the next stage was something he is looking forward to and Jaehwan chimed in eagerly that the stage after will be a funny and witty one. Unit The Heal (Seongwu, Daehwi) took the stage with their sentimental track  ‘Hourglass’ followed by unit Triple Position (Daniel, Woojin, Jaehwan) with their fun track ‘Kangaroo’.

A VCR called ‘Secret Lab of One the World’ was shown on the screen with Daehwi introduced as the doctor of love, Jisung as the doctor of intelligence and Woojin as the doctor of passion. In the VCR, the three of them activated a secret device and fireworks went off inside the stadium. DJ Hankki (Jisung) took the stage by storm with his dj-ing followed by Sungwoon’s and Guanlin’s solo dance performances.

Wanna One made the crowd go wild with fan favourite tracks ‘Wanna Be’, ‘Twilight’ and the ever-popular ‘Pick Me’. They teased the fans by saying that the next song will be the last and proceeded to perform their golden track ‘Gold’. As the fans chanted for an encore, a behind-the-scene VCR of their music videos was played and shortly after, the members were back on stage performing their latest title track ‘Light’.  They wrapped up the 2 hours plus show with their last words starting from Minhyun, Woojin, Jaehwan, Sungwoon, Jisung, Daniel, Jinyoung, Daehwi, Jihoon, Seongwu and Guanlin. Jihoon did his signature jeojang and they all made a heart at the end. They ended the show with their fan-dedicated track ‘I Promise You (I.P.U)’ and told everyone that they will return to Singapore again. 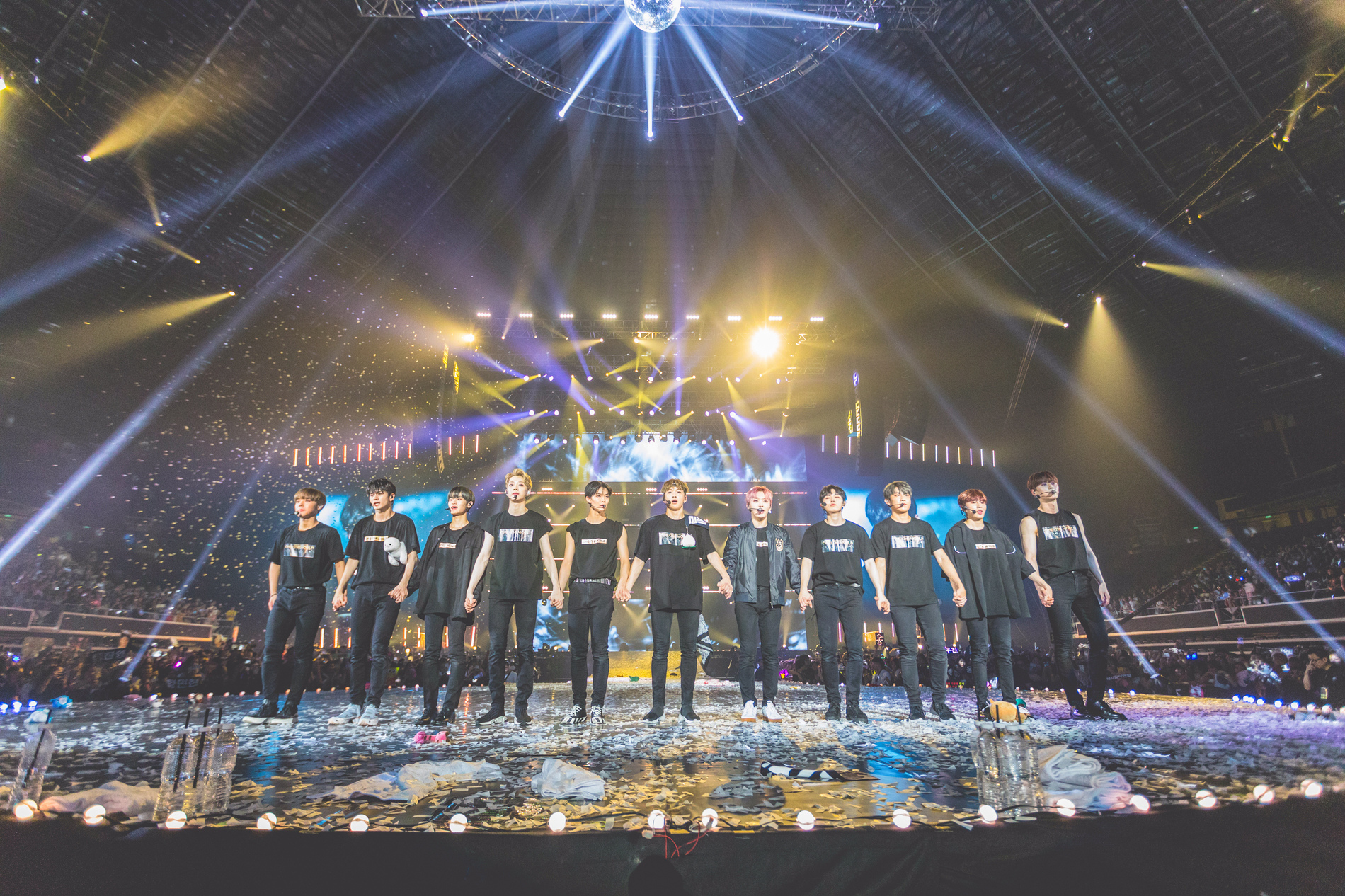 It was an incredible event to go to and Officially Kmusic would like to extend our thanks to ONE Production for this opportunity!

Photos by: ONE Production

Scroll for more
Tap
K-EXCLUSIVE: 24K made history and dream come true in Prague
K-EXCLUSIVE: DAY6 wrap-up their Australian tour with a phenomenal set at the Enmore
Scroll
Loading Comments...