Good news for Wanna One fans! Kang Daniel and Ong Seong Wu have been confirmed to be permanent cast members of variety show, ‘Master Key!’ 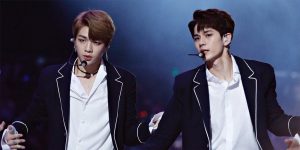 Excitingly, this marks the first time a Wanna One member is a permanent member of any variety show! Fans can get ready to see a lot more of these two talented boys on their screens!

‘Master Key’ is a variety show that features famous cast members participating in games to figure out who holds the ‘master key.’

Scroll for more
Tap
ASTRO’s Cha Eun Woo uses the power of pretzels to confess his love in new commercial!
5th line up for ‘Master Key’ will have you clapping with excitement!
Scroll
Loading Comments...