K-EXCLUSIVE: U-KISS at the Warfield Theater in San Francisco

K-EXCLUSIVE: U-KISS at the Warfield Theater in San Francisco

Saturday, January 11th, the six boys of U-KISS graced the stage at the Warfield Theater in San Francisco, California.

Fans stood patiently outside awaiting the performances to come by the U-KISS members, Kevin, Eli, Kiseop, SooHyun, AJ and Hoon.

Finally, it was show-time. A short video began to play on the screen introducing each member. Fans cheered wildly in anticipation. When the video stopped, lights illuminated the six figures of U-KISS  before their beloved KISSME‘s.

They started the show with their hit song “Stop Girl.” The crowd went nuts, singing and dancing along as the boys took the time to reach for hands from the fans in the front rows. They continued with “She’s Mine” and “Bingeul Bingeul.” 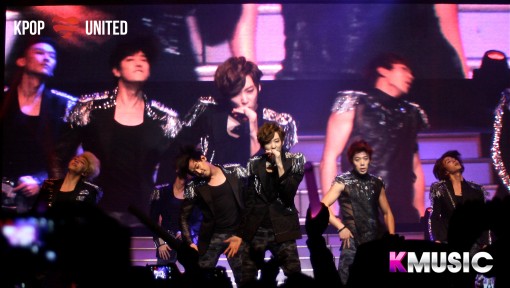 After performing the three breath-taking songs the members came together for their introductions. Kevin, Eli and AJ had quite a fun time teasing SooHyun, Kiseop and Hoon for their adorable “Engrish” in their introductions. Silly SooHyun couldn’t stop showing the KISSME’s his sexy moves while Hoon and Kiseop teased fans by pretending to kiss. As a special treat to Kevin, his family showed up to support their performances. 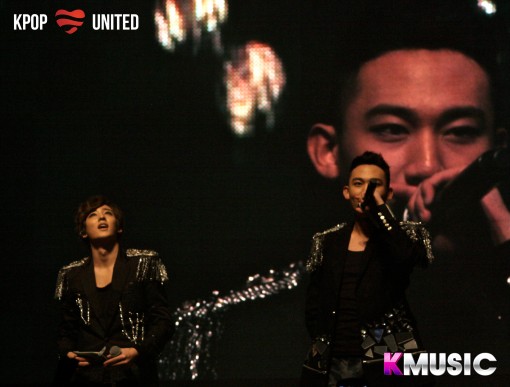 After introductions, they told the crowd to make some noise as they moved into more performances. They sang “Standing Still“, “Someday” and “DORA DORA.” There was also a duet by AJ and Kiseop with “Obsession,” written by AJ himself. They then took to the question board.

The members swarmed around the board and picked off some of the sticky notes written by their fans. Some were quite cute and Kevin and AJ couldn’t help but blurt them out. “Can I buy you a drank?” and “Will you marry me?” were only a couple of the funny posts.

SooHyun was first up, picking a note for a special KISSME who’s birthday happened to be on the day of the event. Being the character he is, SooHyun sang a very special, sexy birthday song for the lucky fan; taking the time to sigh and peel his shirt back a little. Oh how happy that fan must have been!

What’s a K-Pop concert without a little “aegyo“? Hoon picked a sticky note asking if he could show the crowd his aegyo with the “Gwiyomi” song. He did so happily, giving a cute, yet sexy version; even adding in a cartwheel to top it off. Following along the same category, AJ’s sticky note asked who in U-KISS has the most aegyo, to which all of the members pointed at Kevin. Kevin then took his turn at the Gwiyomi song, finishing with an extra long kiss for the crowd, “Muaaah~”.

One of the most memorable of the questions asked was one Kevin choose, “How would you propose?” He answered, “When I propose, I want to sing a song to that special girl. I’ll sing ‘Just the Way You Are‘ by Bruno Mars.” He then made his way to the side of the stage, reached for a fan and beautifully serenaded her in song, leaving her with a sweet kiss on the hand.

After questions, they sang their most requested Japanese songs  “Tick Tack” and “Forbidden Love“. 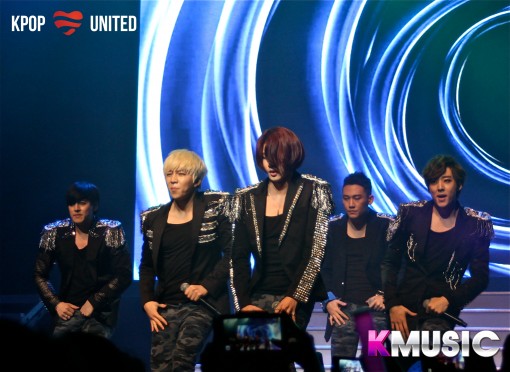 Following the performances, a special “Super Fan” was brought to the stage next. Many KISSME’s sent in letters to which the boys had to pick one lucky winner. Los Angeles local, Reiya, was brought to the stage. The boys all pushed and pulled for her attention. Cute SooHyun couldn’t keep his hands off of her as he hugged, leaned on and even kneeled by her feet to cuddle her leg. In the end, her favorite member turned out to be Eli. They then prepared a special song just for her, their “Mysterious Lady“. It was a very sweet performance indeed.

They ended the night with their songs, “0330“, “Neverland“, “Man Man Ha Ni” and “Without You.” A spectacular show by far with lots of laughs and lots of love. KISSME’s will surly remember the fun had at the Warfield Theater for a long time to come.

A special thanks to K-POP UNITED and MNET for allowing us to attend.