KMUSIC Live at the PressCon of U-Kiss on Jan.18th !

KMUSIC Live at the PressCon of U-Kiss on Jan.18th !

On January 18th, Kmusic and other media people, as well as some fans who won in some raffles or contests, got inside the venue of Manila Hotel at around 1:30PM. While waiting for the artists, they played a lot of songs like Infinite‘s “The Chaser”, “So Amazing”, even the song of Infinite H, “Special Girl” was played; EXO‘s “Mama”, “History”, “Angel” and “Two Moons”; SNSD‘s “I Got A Boy” and “The Boys”; Tasty‘s “You Know Me”; U-Kiss‘ “Neverland” and “Doradora”; and Tahiti‘s “Tonight” and “Hasta Luego”.

After all the medias and the fans had settled down in their seats, the presscon officially started. First, they introduced the 20 winners of the Dream K-Pop Fantasy Concert Dance Battle, they were asked some questions related to K-pop. They will be the front act during the concert that will happen tonight (January 19th) at 6:30PM at the SM Mall of Asia Open Grounds, also, they will have the chance to talk to the stars backstage.

The winners performed quite a lot of songs like Infinite’s “Come Back”, EXO’s “Mama” and “History”, and SNSD’s “The Boys”. After their performance, the MC interviewed some fans inside the presscon, common questions that were being asked were “Who is your favorite group?” “Who are you mostly anticipated to see during the concert?” and people who were interviewed mostly answered Infinite, EXO, SNSD (even though they’re not in the venue), U-Kiss; and the bias that had been repeatedly mentioned was Kai and Luhan of EXO, Eli of U-Kiss and Taeyeon of SNSD.

Finally, the time that we were waiting for had come, the first group that was called out was U-KISS. The members who were present were Soohyun, Kevin, Kiseop, Dongho, Eli and Hoon. U-Kiss had already visited the Philippines a lot of times and today was their 4th visit already. 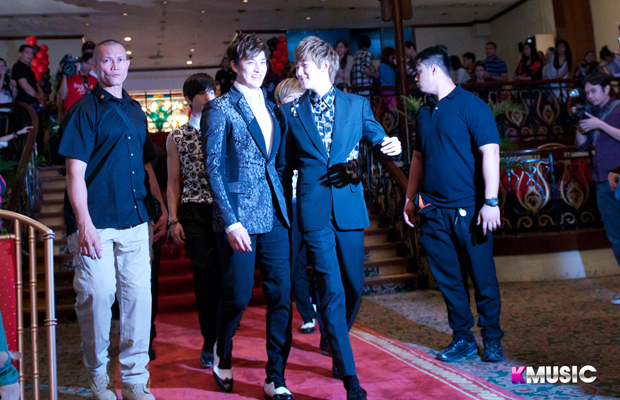 The MC asked some questions, and they were:

1) What did you guys miss the most about the Philippines?

Eli answered cutely, “The weather, the beautiful weather…the HOT weather”, which made the audience laughed with him.

2) How about the food? And which one would you like to try?

Since they only arrived 3 hours ago priorr to the presscon so they don’t have the chance to taste some Filipino food. And Kevin asked if we have some recommendations for them, and the crowd were shouting “adobo”, “sisig” and “balot”, and U-Kiss would want to try “sisig” and “balot”. 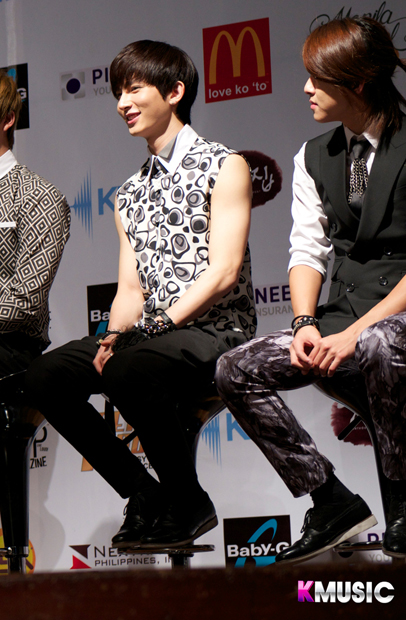 3) How different are the Filipino fans from the fans in other countries?

They answered that they have a special connection with Filipino Kissmes because their first concert was held in Manila and it’s a special concert for them and it will always be in their hearts. They thanked the fans for always been supportive even though they have another chance to visit very often, the fans still love them as much as they can. Then towards Kevin’s answer at the end, he said  “Thank you. Mahal Kita”, which made the hearts of the audience flutter. 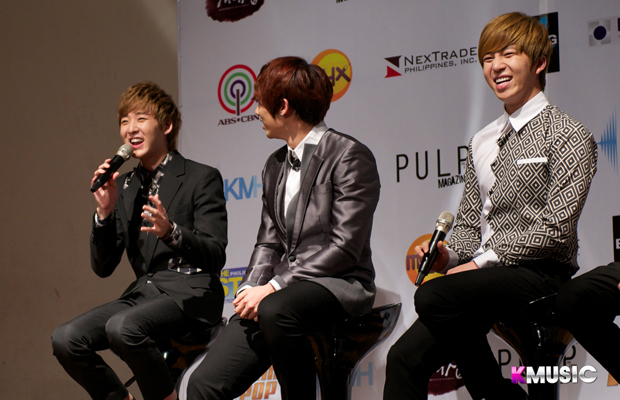 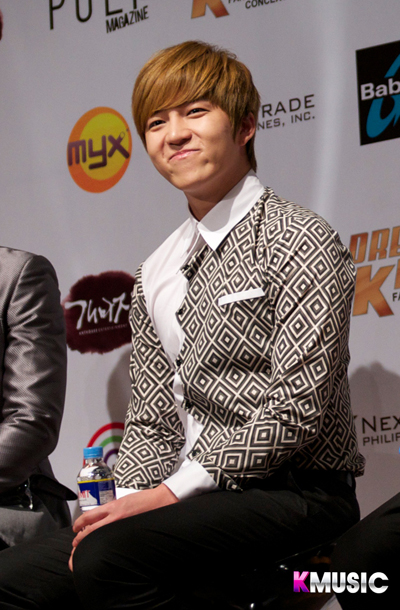 They also mentioned that it is Hoon’s first time in Manila and he’s excited to meet the Filipino Kissmes. They also said that during the concert date that will happen on January 19, they will do their best and will give their everything for their fans in the Philippines.

Now, it’s the media’s time to raise their questions to the idols, some questions being raised were:

1) What’s your greatest advice to your fans, especially to Filipino fans who really idolize and want to follow your footsteps?

Soohyun: It’s been a while for U-Kiss and we’ve been trying hard to get where we are right now. Don’t give up on your dreams and always try your hardest and I hope you guys will love music and become whoever you wanna become. Always follow your dreams.

Eli: Never give up. 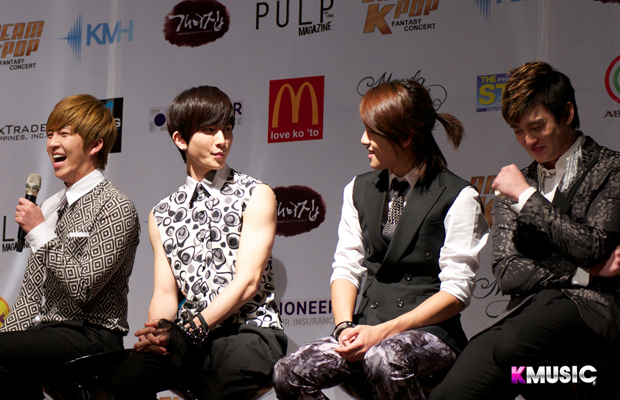 2) If you could describe the member right next to you as a dessert, what would it be and why?

Hoon (to Soohyun): Chocolate. He chose chocolate because it describes Soohyun’s voice because when you hear his sweet voice it’s like you’re eating chocolate.

Soohyun (to Kiseop): Strawberry. He’s sweet. Strawberry is red…Kiseop is so sexy! (which caused a lot of laughter from the crowd). In short, Kiseop is sweet and sexy.

Dongho (to Eli): Coffee. Coffee is addicting and Eli is handsome. When you smell the coffee you can’t really forget us so eli could never forget.

Eli (to Kevin): Apple Pie. Apple pie because one you taste it, it’s so sweet but also warm because Kevin is warm-hearted. 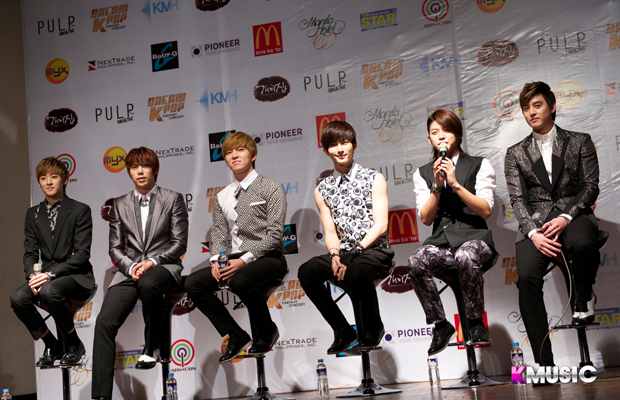 3) Can you tell us more about your Korean comeback on March or any future plans.

Our 3rd album in Korea will be released around March and I hope you guys will anticipate our new album because we’re recording a lot these days, I hope you guys enjoy our new album. As for the future plans, there’s not much plans yet but we’re already talking with our manager about coming here as much as we can and will even hold fan meeting and concerts.

As the presscon ended for U-Kiss, they had been handed a bouquet of flower as a token. 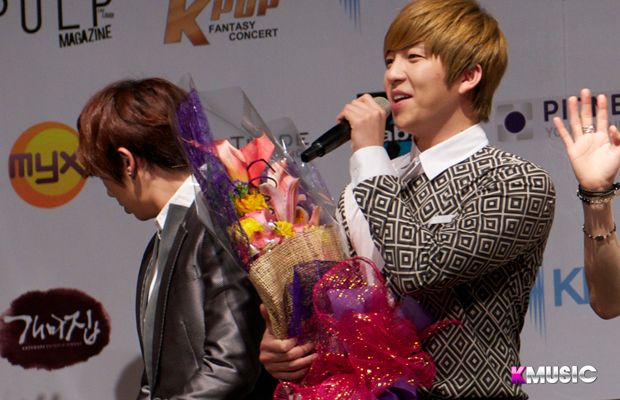 Kissmes should expect U-Kiss to perform quite a lot of their songs during the concert that will be held at the SM Mall of Asia Open Grounds.