*cue dramatic music* In a world of danger, one man defies it all. Well… Except when it comes to his own wife.

The ever so funny movie, ‘The Spy’ is about Chul Soo, played by Sul Kyung-gu, who is a top notch spy. His techniques are unbeatable and can’t be stopped, that is, unless his wife, Ahn Yeong-Hui, is involved. 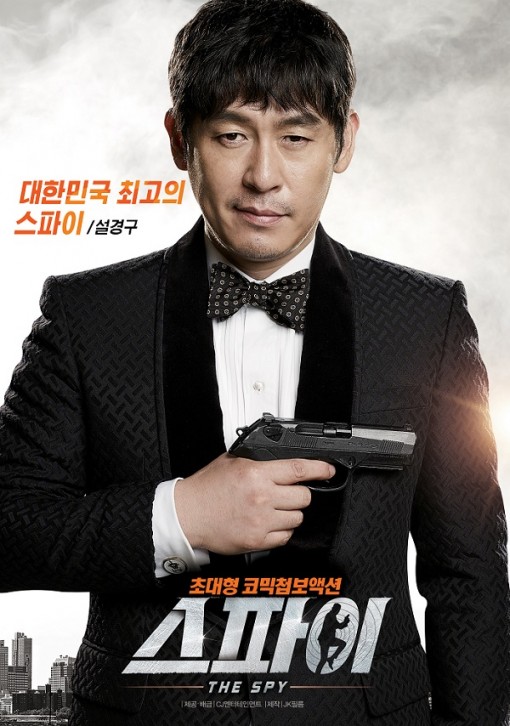 Ahn Yeong-Hui played by Moon So-ri has a fiery personality. She is strong and passionate about what she wants. Being a flight attendant, Yeong-Hui travels to Thailand and finds herself literally falling head over heals for mystery man, Ryan, played by Daniel Henney.

When a top secret mission breaks loose, Chul Soo finds himself juggling his personal life with his duty to protect his country. Will Chul Soo be able to save both his country and his marriage? 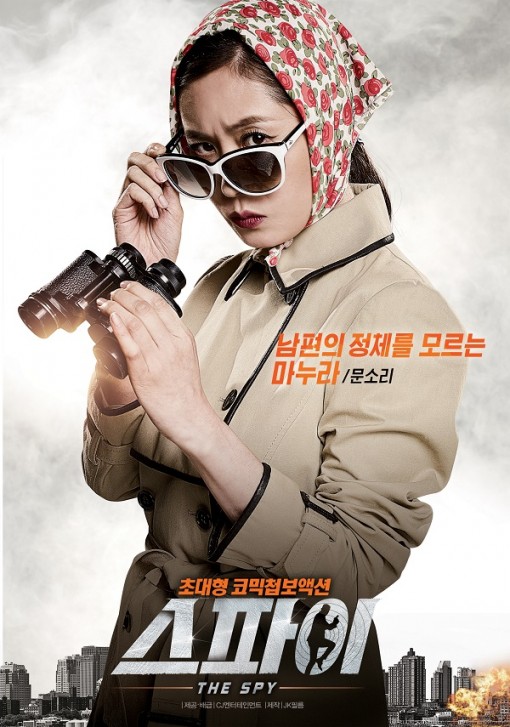 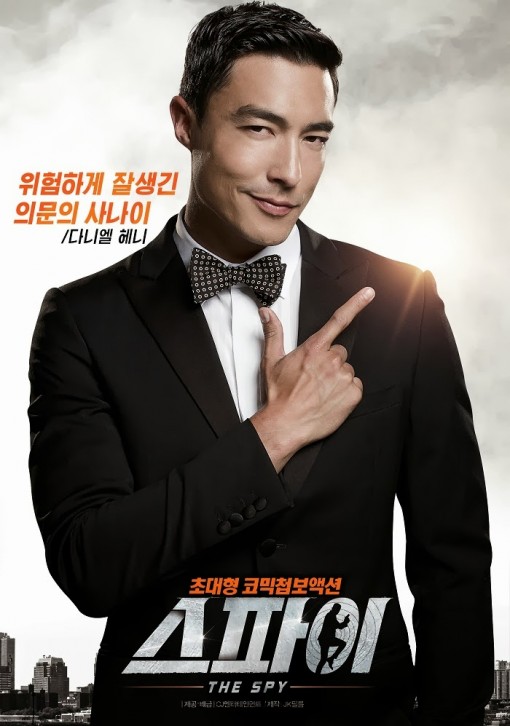 Okay, beware readers as I may unveil some spoilers. [To view these spoilers, please take your cursor and select/highlight the areas marked as spoilers. ]

First of all, this movie is by far one of the greatest spy movies, no wait, one of the greatest movies I’ve ever seen. It is very well made and had me gasping at time with so many good camera angles. The acting was wonderful and it was quite nice to see English and Korean being used together so nicely.

So this is the whole story… [SPOILER]

The story-line was very strong. A plane gets shot down with some very important cargo in it. By cargo, I mean an important person. To find the culprit and also save the world from those trying to steal important information, they had to call in the spies.

A top spy always has a weakness. For Chul Soo, it was his wife. Having been married for 7 years, they still have no child. His wife, Yeong-Hui, began getting desperate. She has baby fever but Chul Soo has to leave on a “business trip.” His flight attendant wife then goes to Thailand but lies and says she is in Busan. That’s when things became fishy.

Mystery man, Ryan, appears and starts getting close to Yeong-Hui. Little does Yeong-Hui know, her husband has been keeping close tabs on them both. The cool thing about this is that Chul Soo doesn’t realize that him secretly spying on his wife is actually helping the mission.

Things get crazy when some spies kidnap Sul-Hee played by Han Ye-Ri to get information for a nuclear war missile, thus beginning the rescue mission. Chul Soo suppresses his sad feelings and gets the job done. Sul-Hee now is in good hands though, there is a twist. In the process of saving her, his glasses caught quite a cute discovery. His wife has a little bun in the oven! YES SHE IS PREGNANT! Father to be Chul Soo is so happy, but he can’t tell his wife or she will realize he is a spy!

They then return to Korea after Sul-Hee is safe, or is she… The climax of the movie, where it all breaks down. Ryan actually is a spy, though the audience has known all along, and Chul-Soo, Yeong-Hui and the rest of the spies finally figure it out in the end when they do so me background checks and wire up Yeong-Hui with some nifty spy equipment. Who has the missile now? Well who other than Ryan! He also slyly takes Yeong-Hui as well. Gosh, why do the handsome men end up being such bad guys! Ryan needs Sul-Hee and he knows exactly where she is. Holding Chul-Soo’s wife ransome, he orders that Sul-Hee be brought to the missile. Chul-Soo takes Sul-Hee and the good spies devise a plan to disarm the missile and save Korea.

What happens in the end? Well, a hormonal pregnant woman somehow gets hold of a gun and protects her husband by shooting it off like a water hose with too much pressure. Any guesses who this woman is? Of course, it’s Yeong-Hui! Pregnant woman do some crazy stuff when they are hormonal! She then truly finds out her husband is a spy.

Sul-Hee and Yeong-Hui are suddenly kidnapped yet again by Ryan in a helicopter. Chul-Soo quickly does the brave thing and hops on the feet of the chopper. The girls get smart, create a distraction and Chul Soo hops in to fight! While the fight is going on, Sul-Hee uses her knowledge to divert the missile and destroys the detonator box. Ryan and Chul-Soo are hanging off of the chopper. When you think it will be the end for both of them, “BANG” a shot fires. Prego shot Ryan in the back, sending him falling to his demise.[END SPOILER]

This movie had me rolling on the ground laughing! The humor was classy yet raunchy at times. As shown in the preview, the toilet scene was quite a crack up! [SPOILER]I truly enjoyed how the story began with Kyung-gu’s character going over key tactics of being a spy and then turned over to him “attempting” to use those tactics on his own wife. Who ever thought of that in the script, thank you, that part alone left me in stitches![END OF SPOILER]

Moving forward to that ever so handsome mystery man, Ryan, played by Daniel Henny, we now see why Yeong-Hui falls for his charm. His charm has the ability to melt any woman. I mean, I don’t know what girl could look into those eyes and keep their heart still. His acting ability is very powerful. It’s like action was meant for him! He gives off a powerful vibe in each gun scene as if he’s thinking, “That’s right, I’m a bad a**!”  [SPOILER] Ryan sweeps Yeong-Hui off of her feet right from the start. Little does she know, her kind and handsome fantasy man is also a spy going after her husband! Henney puts his action acting skills to the max. Gun scenes galore! [END SPOILER]

There is so much amazing action shots that I was on the edge of my seat at times! There were scenes with gun battles, jumping off buildings, explosions, high tech equipment, dangling people from high places and crazy fist fights! There was a scene where Chul Soo and his opponent break through a hotel balcony guard railing and are dangling high above the ground while dukeing it out. Chul-Soo’s opponent then falls only to be caught by a car! OUCH! So intense that it had me biting my nails!


My favorite character aside from the ever so funny Chul Soo was his partner in crime, Jin played by Ko Chang-Seok. His funny yet witty personality gave the movie that extra kick of comedy! I couldn’t contain my laughter when Chang-Seok’s character began crying after getting drunk when it was Chul-Soo who had found out about his wife and Ryan spending time together. Seeing Chang-Seok shimmy under those tables at the restaurant shoot-out made me belly laugh so hard. He moved pretty darn fast! 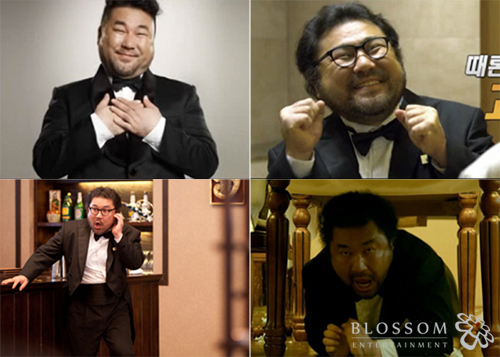 Overall, it was a wonderful movie! This will be one of those movies worth watching again and again. It is funny, full of action and sweet all in one. If you would like something that will make your abs ache from laughter, this should be your pick.

Special thanks to CJ Entertainment for allowing us to review this amazing movie!

This movie is now playing in select theaters. Click here to see show times now and buy your tickets!

Scroll for more
Tap
G-Dragon Thanks Shanghai VIPs with Fierce Photo
Tablo is One Proud Papa as He Shows Off Recent Photos of His Daughter
Scroll
Loading Comments...