On the 20th of December it was revealed that the new member of boy group KNK would be Lee Dongwon.

Debuting in 2016, KNK was a five member group consisting of Kim Youjin, Park Seoham (previously Park Seungjun), Jung Inseong, Kim Jihun and Oh Heejun. Earlier this year in September it was announced that Kim Youjin, amidst discussion with all members, had decided to leave due to his personal health conditions. This left KNK with four members and although they have not had a comeback, have been consistently doing activities.

On the 19th in KNK’s official fancafe, leader Kim Jihun wrote a letter to fans about the group adding a new member. This was revealed to be Lee Dongwon. Dongwon is a former FNC trainee and KNK’s management has said that all members are close to each other.

Have a look at KNK’s group image with all five members! 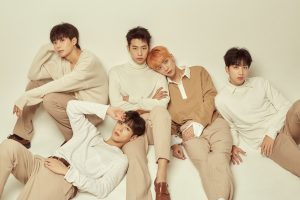 KNK are planning to have a comeback in early 2019 and are currently participating in MyMusicTaste.

What do you think of this change? Tell us in the comments below!

Scroll for more
Tap
Astro is making a comeback in January!
Super Junior’s Sungmin will appear in musical in Japan to wrap up 2018!
Scroll
Loading Comments...