The first Korean HipHop Concert in the Philippines is presented to you by: Big Events Management in partnership with Highlight Media Production powered by Coast to Coast Co.,Ltd and with media partners: RokHipHop and In4HipHop in Korea.

The first Korean Hip Hop Concert in the Philippines. This event is made possible to introduce authentic hip-hop music straight from Seoul Korea. It is set to happen on September 15, 2017 from 7pm to 12am.

Korean Street Sound will showcase nine (10) popular top rank and new generation Korean artist. These artists are already produced their own albums, won competitions and guest in top shows in Korea. We will also introduce a top Korean DJ to complete the overall underground Korean hip-hop mood and feel.

This concert is for Filipinos and Koreans who wants to experience a night full of music blast and authentic Korean style party. Imagine an exclusive concert that will be featured in Korean entertainment websites and local media outlets. The exposure we can offer will benefit your company’s image to a wider range. This event will happen on September 15, 2017 at Elements, Centris from 8pm – onwards. Get to know more about the korean hiphop artist, culture and their music.

Big Events Management opens a Down payment Scheme for all the fans. The fans may pay 1K until August 18, 2017 and remaining balance will be on August 23, 2017. This is a good opportunity for the fans that are really into Korean Hiphop.

Buy your tickets now and make this event a good one and we might grant one of your wishes next year! Now is the time to show how much you want K-Hiphop in the Philippines. You won’t regret attending this epic concert. This is just the start and we need your full support.

For tickets and other details, visit www.bigeventsmngt.wixsite.com/khiphop 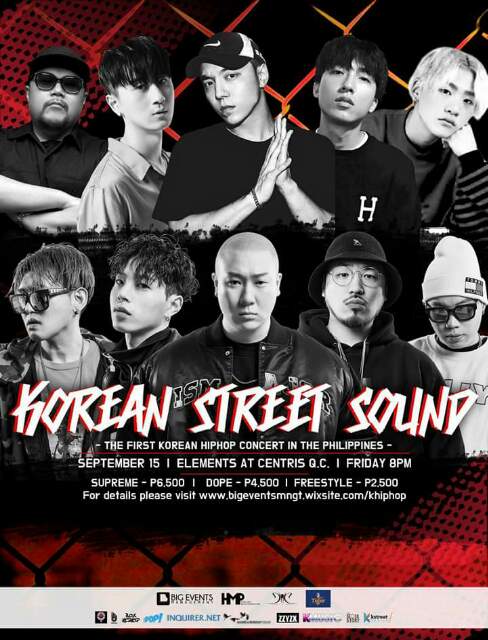