Recently, according to TV Report, Lee Hyun Woo was spotted at the subway.

The photo of the actor sitting comfortably amongst the people, have been circulating in an online community titled “Lee Hyun Woo Takes the Subway.”

The photo, which shows two pictures, were taken by some avid fans. The right photo shows the actor looking across the subway in a dark blue jacket, surrounded by people that seems not to notice him; while on the left photo, he is wearing a hat and is eating a lollipop. In this photo, he noticed the fan taking picture and made eye contact with the camera. 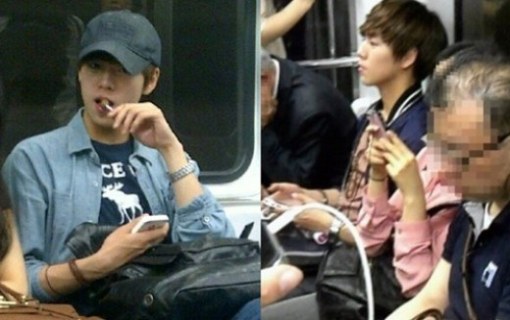 Fans and netizens who saw the photos commented, “He’s got the pretty boy pose down,” “Whoa, eye contact. Her heart must have stopped,” “I wonder when Lee Hyun Woo was on the subway,” “Wow, he is so cute” and “Lee Hyun Woo is a total pretty boy.”

Fans who saw him were so lucky!