Try not to cry! Lee Sung Kyung and Nam Joo Hyuk have called it quits!

Try not to cry! Lee Sung Kyung and Nam Joo Hyuk have called it quits!

It has been confirmed that actors Lee Sung Kyung and Nam Joo Hyuk have officially broken up.

A statement released by YG Entertainment confirmed that the two decided to part ways due to a private matter. However, industry representatives say the two grew apart due to busy schedules, but have decided to maintain a platonic friendship. 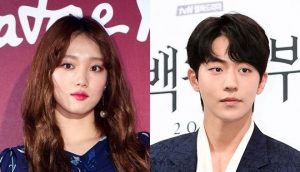 The two began dating in April, and had previously starred in tVn’s ‘Cheese in the Trap’ and MBC’s ‘Weightlifing Fairy Kim Bok Joo’ together.

Currently, the two are busy with different projects – Nam Joo Hyuk is starring in drama ‘Bride of the Water God’ and Lee Sung Kyung is filming a movie called ‘Love Sling.’

Officially Kmusic wishes the two all the best in their future projects!