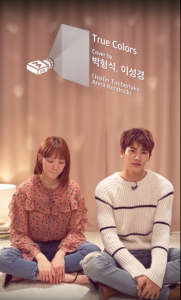 On February 13th, Lee Sung Kyung and Park Hyung Sik came together on Dingo Music for a live performance of their take on the song, ‘True Colors.’ The track was a part of the Korean adaption of  Dreamworks ‘Trolls,‘ in which both actors will be lending their dubbing skills. Lee Sung Kyung will be playing the role of Poppy, and Park Hyung Sik will be playing, Branch. The two stars harmonized perfectly and did a great Korean rendition of the Cindy Lauper original.

Check out the video below:

Written and Edited by: Gigi E.

Scroll for more
Tap
100% To Make A Comeback This Month!
W Project Shows Off Jang Jun And Young Taek’s Potential Through ‘Drought’
Scroll