Vixx are going all out to conclude their ‘Conception’ trilogy with “Kratos“! The latest in a chain of teasers, are character trailers which started dropping unexpectedly on October 24th. The recent additions to the teaser releases are Ravi and Leo, who followed the ominous trailers of Ken and Hongbin.

Some Starlights have already started putting pieces together to connect all the 3 installments of the series. These character trailers seem to be providing the smallest clues as to who each member is in this Greek Saga. 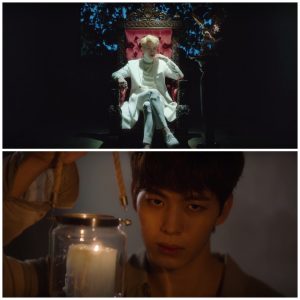 First up was Ravi, and his enigmatic teaser full of red hues. Like Ken– who is speculated to be Kratos– Ravi is seen lounging on a luxurious chaise, surrounded by various mystery liquids in crystal and glass jars. Previously, Ravi was thought to be Hades and the red filtering on this trailer might be pointing us further in that direction.

Following Ravi, was Leo’s trailer which seemed shorter and more confusing than the previous ones. Surrounded by an ankle-deep pool of water and various jars, the latter seems to be the only connection between the two members. Starlights had speculated that Leo’s story line goes all the way back to “Zelos“, but the character trailer fails to shed any more light on that theory.

With only N and Hyuk left, it will be interesting to see if the the theories of N being Zelos were correct and what role Hyuk plays in the greater narrative.

Vixx’s 3rd mini album is set to release on October 31st, with title track “The Closer.” Stay with Officially Kmusic Now as we keep you updated on all things Vixx!