An all-black teaser image of the trio was released on LOONA‘s official SNS accounts at 12AM KST on October 19. Check it out below! 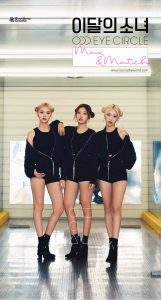 Odd Eye Circle, made up of members JinSoul, Kim Lip, and Choerry, is a sub-unit of the pre-debut group LOONA. The unit’s teaser shows the three members being equal parts fierce and cute, with their black outfits balanced out by their space bun hairstyles! The industrial metallic floor and fluorescent lighting suggest that Odd Eye Circle will be taking on a more intense concept for their comeback.

‘Max & Match‘ will be a repackaged version of Odd Eye Circle‘s debut mini album ‘Mix & Match‘, taking its name from the fact that Odd Eye Circle will be “going above the max” with this comeback. It remains to be seen what the group’s title song will be, but BlockBerry Creative have confirmed that the group will include an English version of ‘Loonatic‘ on the repackaged album!