Los Angeles Gets ‘Apink Memory’ They Will Never Forget

Los Angeles Gets ‘Apink Memory’ They Will Never Forget

The outside of Club Nokia was all aglow with Pink Pandas who had lined up in anticipation for APink’s North American Tour, ‘Pink Memory North American Tour 2016’ sponsored by KPOPMe. Though there were more guys than girls in attendance, everyone was all smiles and sharing what signs and lightsticks they had brought to cheer on the six member girl group from  ACube Entertainment. Previously, Apink had performed in Vancouver, BC, Dallas, TX, and San Francisco, CA before finishing out the leg here in Los Angeles. (Check out our coverage if you already haven’t!) 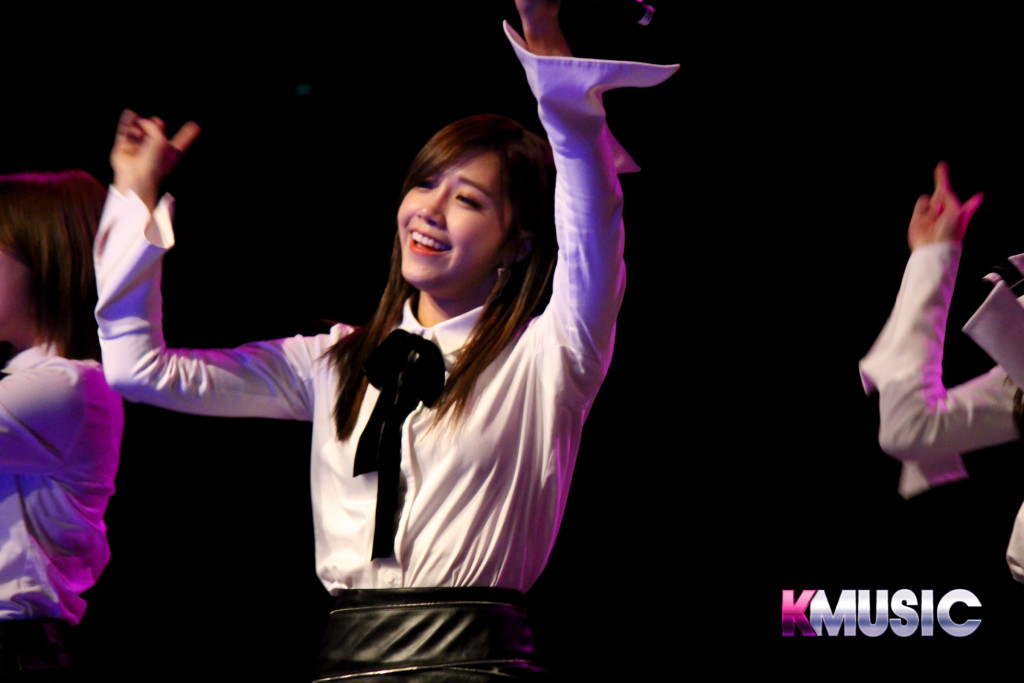 The show started with a burst of energy from the crowd as ChoRong, Bomi, EunJi, NaEun, NamJoo, and HaYoung entered the stage and opened the concert with ‘Remember’ from their latest comeback. Looking amazing in white blouses with classic elegant black bow ties, and pleather skirts and shorts, Apink danced around the stage as the fans waved their signs.

Being a smaller venue, I have no doubt that the women on stage couldn’t see the love they were receiving. They immediately went into ‘Mr. Chu’ off their ‘Pink Blossom’ mini album. This song  won six music awards and the album peaked at number two for the Billboard’s top 100 Kpop albums. Almost as loud as the group itself, the fanchants were strong and it brought a noticeable smile to the six ladies on stage.

After the first two songs, the introductions were made brought to by the MC of the evening, MC Jeremy Fong. Having two interpreters in stage to hear the questions asked, each member gave her “hellos” in English stating over and over how much they loved being in Los Angeles and meeting their fans. 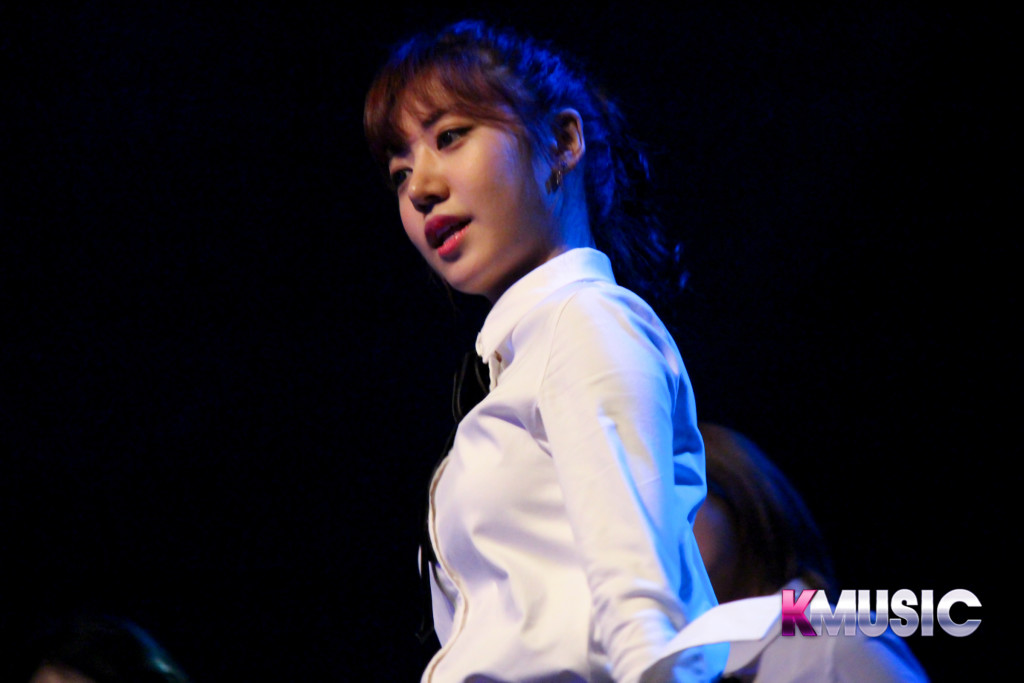 ‘Good Morning Baby’ and ‘Sunday Monday’ followed the introductions to move the showcase along. After performing, the MC came out again to ask Apink some questions that the fans had submitted. ChoRong, leader of the group, was asked “What are some of the funny habits of the members?” in which she replied that Bomi had a habit of caring for everyone in the group.

Next question was directed to Bomi on performing her best aegyo to the ‘Confession Song’ as EunJi tried to be her second mic. Bomi and EunJi then turn around and chanted for the leader to sing it as well. ChoRong stated that she was stressed at the thought of doing aegyo but reluctantly switched to the ‘귀요미 (Gwiyomi Song)’ and EunJi played the role of second mic to her as well. ChoRong says that “this the hardest day ever” as she sings the song. Bomi cheers her on and the crowd chants along with it, but by number 3 she yells out in cute frustration. As she finished the song, huge yells were heard from the fan boys in the crowd. 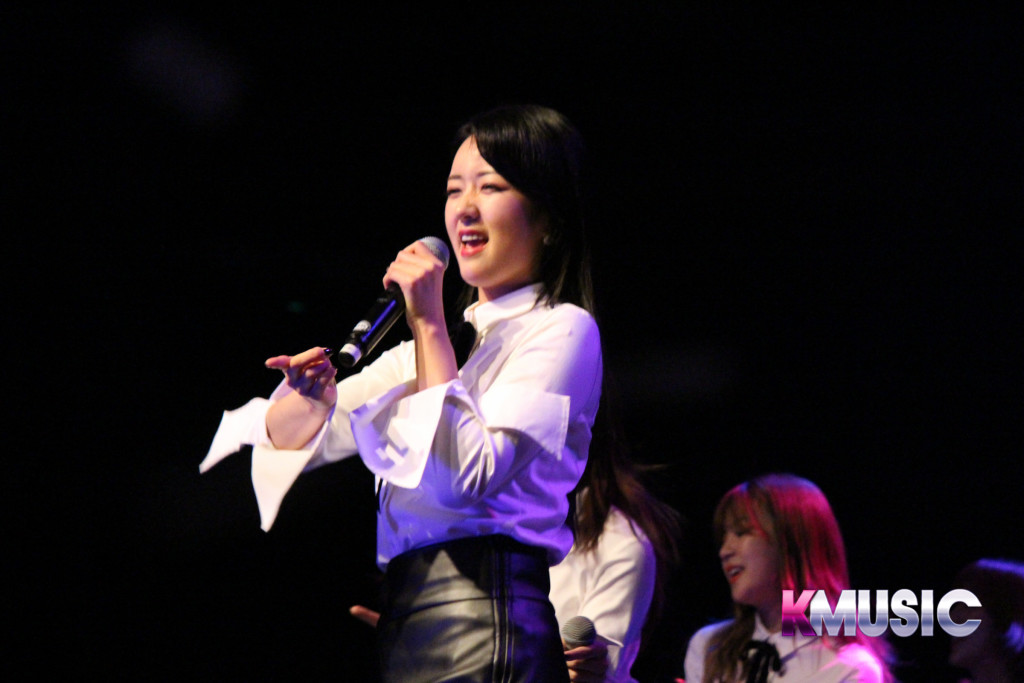 EunJi’s favourite food was the next question! She said she didn’t eat yet and started to “cry”, but then said there is a lot of places she would like to try like In’n’Out Burger. Instead of trying the delicious food, she ate room service instead but before they go back to Korea, they will try what the crowd says is the best food to get. One fan yelled out barbecue to which EunJi promised that  if she eats it, she will post it on SNS for everyone to see.

Na Eun said what she liked about North America was seeing the fans and the food she was able to try which made her trip rich. “North American tour definitely gave me a memorable moment and I will never forget my fans.” 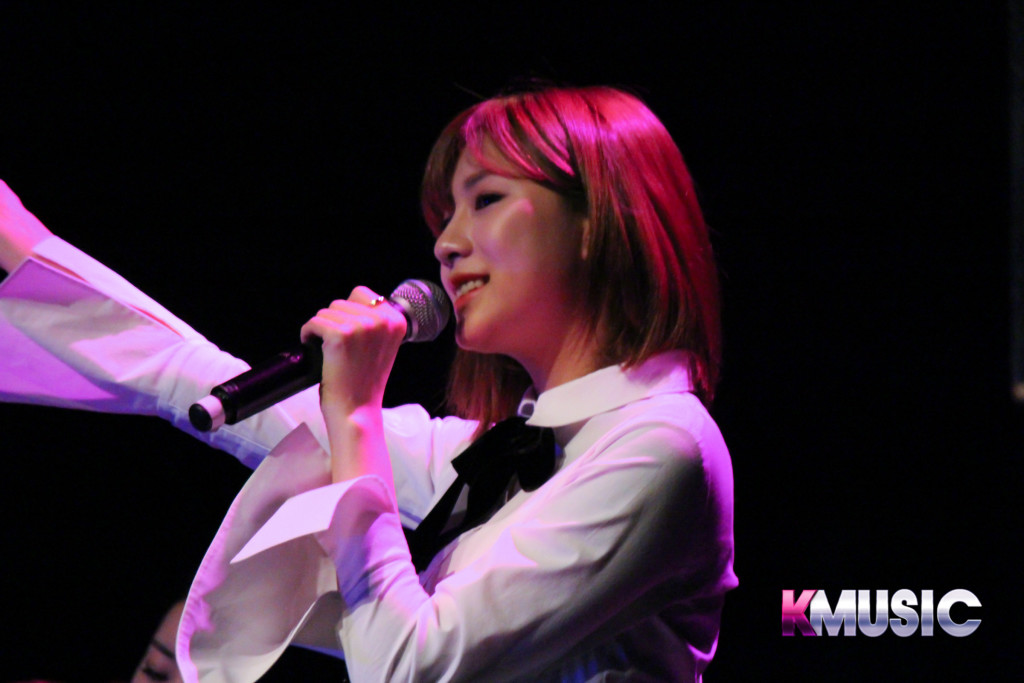 Fans requested a heart and kiss relay which the MC started and then passed it to NamJoo. By the time it go to HaYoung, Bomi and EunJi wanted her to do a sexy kiss instead which HaYoung obliged to the audience’s delight. Bomi cheered for MC to do a sexy one as well and after he did it he said, “I will never do that again.” Deadly aegyo rounded out the last of the request from fans. Starting with HaYoung who looked at the crowd and said “it is a very difficult day for me, I don’t know what to do.” While the audience chanted her name she gave out pocket hearts. After, Bomi did her own pocket hearts while EunJi says that “Apink is weak in aegyo” and when her turn came she said “bye-bye” and tried to leave the stage. According to the members, EunJi has the best aegyo so she ended the Q&A with a heartfelt ‘buing buing’.

Sitting on stools, the six women moved on to ‘Secret’. The song was sweet and amazing as you heard power vocals from Bomi and EunJi and softer vocals from the rest of the group. To keep with the ballads, ‘Wonderful Love’ was their next song and once they ended it, they left the stage. 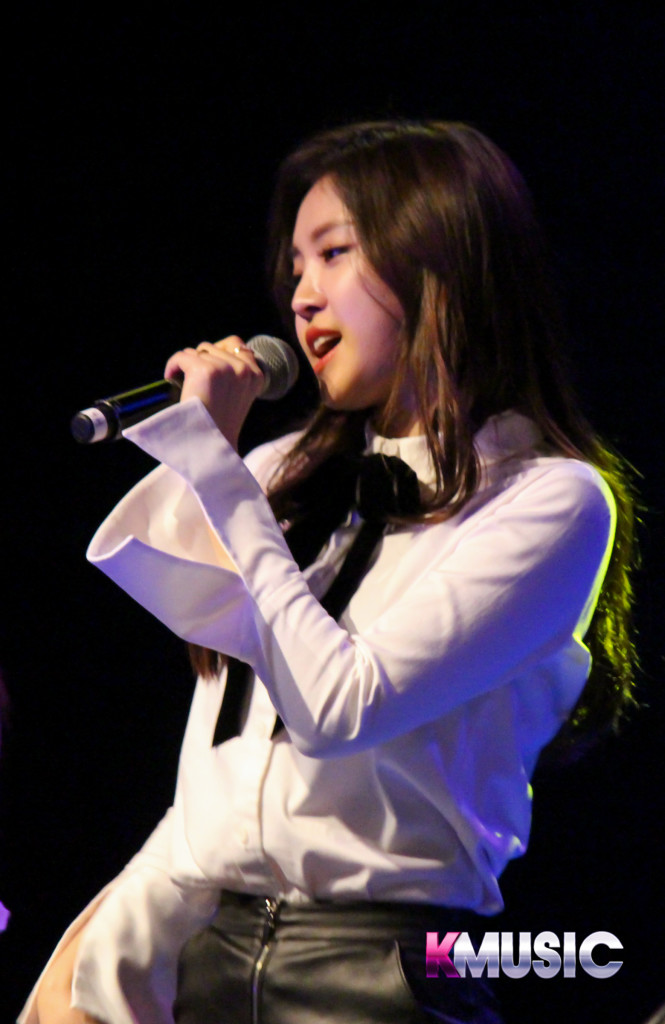 Cover winner, Christine Espinoza. Dressed as a member of Apink and hailing from Victorville, she mentioned has been a fan since 2012. She performed a mix of ‘Luv’, ‘NoNoNo’, and  ‘Mr Chu’. Her energy was good and the crowd was singing and chanting with the songs.

Much like the other shows, two boxes were brought out for a game called ‘What’s In The Box’. Styled in white skirts and plaid tennis shirts, the members split into two groups. The Eonni team consisted of Cho Rong, Bomi, and EunJi while the Dongsaeng team had HaYoung, NamJoo, NaEun. The crowd was given raffle tickets to guess which team would win and three winners would get a prize if they guessed right. In traditional Korean fashion, 가위 바위 보 (rock, paper scissors) was played to be decide who would go first. It was NamJoo verus EunJi but NamJoo won! EunJi got on her knees and apologised to her band mates for losing. In the dongsaeng box was Boba, but it was the reactions that were the funniest. NamJoo freaked out and said it was scary, NaEun said it smelled good, and HaYoung had everyone crowd around her to smell her hands. The three women who made up the dongsaeng team looked at the box for the eonni team and let them know theirs was alive. EunJi went first and grabbed the item, which ended up being an octopus and whipped it around the box. Bomi was terrified and kept poking her finger into it and wondered if it was a live chicken but it was ChoRong’s reaction that was the best because kept screaming every time she tried to touch it. Both guessed right and but the Eonni team was given the win. 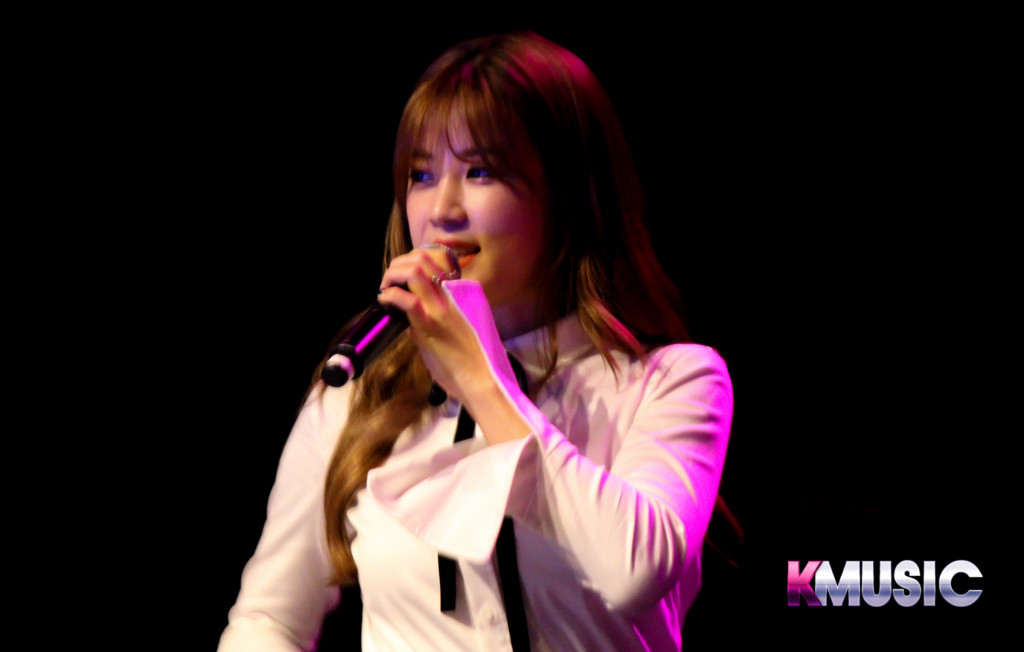 The last selections of songs were ‘My My’, but after Apink stopped to give their goodbyes and hoping to come back to LA and wrapped up the show with ‘U You’ and ‘NoNoNo’ while confetti flew around to end the concert. A couple pictures was taken after goodbyes, but to the audiences surprise, Apink performed one more song, ‘Luv’ before exiting the stage. Of course, with the fans chanting their name, they returned to do an encore song is ‘하늘 높이 (Fly To The Sky)’, before departing for good. This is definitely a concert Los Angeles Pink Pandas will never forget.

Thank you, once again, to KPOPME! Productions, A Cube Entertainment, and Apink for an amazing showcase.