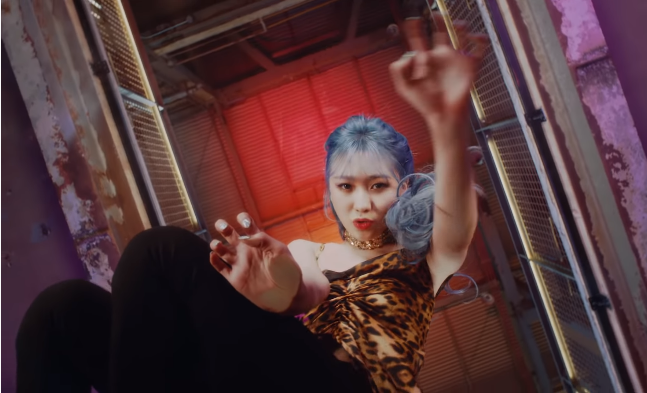 On May 20th, Lovelyz’s Ryu Sujeong released the solo debut title track MV, ‘‘Tiger Eyes’, off her 1st mini album of the same name. Check it out below!

The song starts off with a thumping low bass as the instrumental becomes more complex, before sinking into a restrained sexy clapping beat in for chorus. The raspier tones of the vocalist really shine throughout the song due to this minimal instrumental.

Throughout the MV, we see the Lovelyz member show off sexy expressions in her new bright blue hair. Her eyes pierce the camera as she exudes charisma in the solo and performance scenes. Her solo debut overall is very different to what her group usually releases, known for their innocent and elegant concepts. The group however participated in Mnet‘s idol show, ‘Queendom‘ in 2019, where they showed off their more powerful girl crush sides. This release could be an indication that Lovelyz as well will move towards a more girl crush or sexy concept for their next comeback.

How do you feel about the ‘Tiger Eyes’ MV? Let us know in the comments below!

Scroll for more
Tap
MAMAMOO’s SOLAR debuts with a chic badass MV for ‘Spit It Out’!
VIXX’s KEN reminiscences about past love in emotional solo debut ‘Just for a Moment’ MV!
Scroll