From the short video, Hwasa can be seen in the back of a sleek black car driven by a handsome mystery man. Her femme fatale looks are complimented by the classy piano sounds in the background. Fans get a small taste of the quartets killer vocals and the scene ends with all 4 members looking at the camera with intense, sultry gazes.

The group also recently released group concept photos in preparation for their 4th mini album. As stated in their official Facebook page, the girls have transformed into a “007 Bond” look. Check out the photos below: 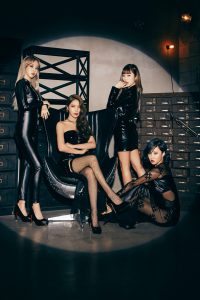 The 4th mini album is set to drop on November 7th, so be sure to check it out!

Scroll for more
Tap
BTS ‘WINGS’ Album Review: Part I: Inside The Hearts of BTS
Luhan Comes Out With New Music Video ‘Catch me When I Fall（某时某刻)’
Scroll
Loading Comments...