MXM reveals the tracklist for ‘More Than Ever’

MXM reveals the tracklist for ‘More Than Ever’

MXM has revealed the tracklist for their upcoming first full album, ‘More Than Ever‘. So, check it out below! 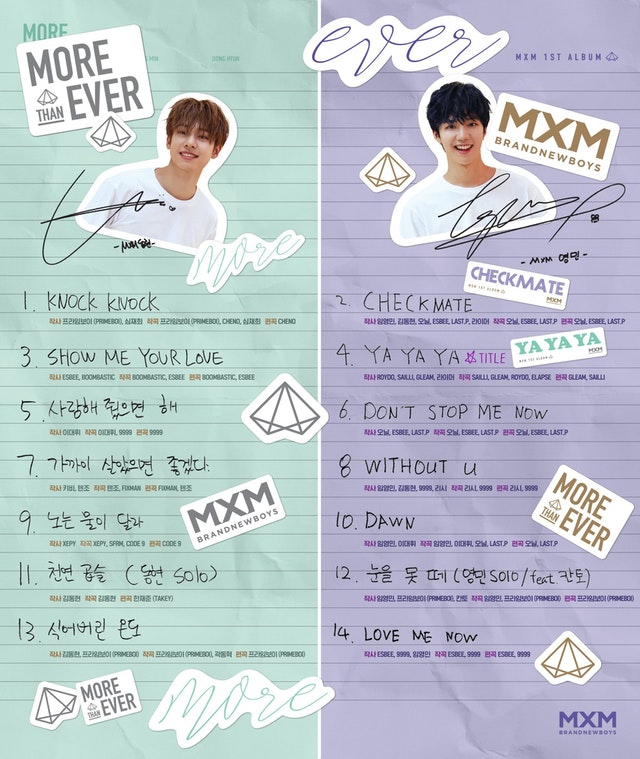 This album has a total of 14 tracks, including the title track, ‘Ya Ya Ya‘ and their solo tracks: Donghyun‘s ‘Naturally Curly‘ and Youngmin‘s ‘Can’t Take My Eyes Off‘ featuring Kanto.

Other tracks that are part of this album includes ‘Knock Knock‘, ‘Checkmate‘, ‘Show Me Your Love‘, ‘I Want You To Love Me‘, ‘Don’t Stop Me Now‘, ‘I Wish You Lived Close‘, ‘Without U‘, ‘Different Kinds‘, ‘Dawn‘, ‘Cooled Temperature‘ and ‘Love Me Now‘.

Meanwhile, they will make their hot return on August 14th. Which track are you looking forward to? Let us know in the comments below!

Scroll for more
Tap
BTOB-BLUE asks fans to guess what stuff belongs to which member in new image teasers!
iKON release another mysterious MV teaser for ‘Killing Me’
Scroll