Have Netizens Found Out Who Will Perform at the 2014 “KBEE”?

Have Netizens Found Out Who Will Perform at the 2014 “KBEE”?

Ever since it was announced that KBEE will be held in Sao Paulo, Brazil this year, netizens have been wondering and trying to find out which group would attend the exposition and perform a showcase.

They seem to have found the answer through VIXX‘s official Fancafe. On July 16th, they posted about the exposition, hinting that they might be the main act: 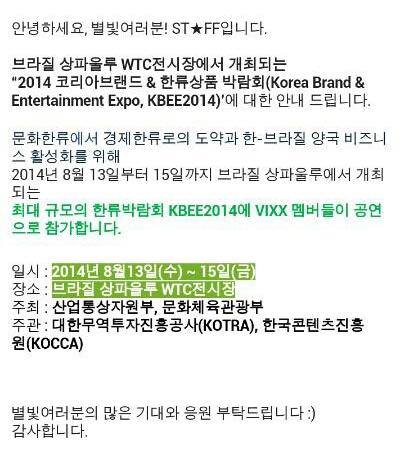 In this post, aside from the date and time information, we can read, “The VIXX members got together to perform at KBEE, the biggest Korean culture festival,”  and they have also asked for the fans’ support.

Although many fanpages are spreading this as an annoucement of VIXX’s performance, the boys might be just sharing the event’s information since they have already perfomed at the KBEE in Japan. Also, when asked about this matter, the official KBEE Facebook page answered that there is no confirmation about the performing group, so we must wait for their official announcement before celebrating.

The official 2014 KBEE ambassador will be announced through their official Facebook page on July 21st, so stay tuned to Officially Kmusic to get all the details!