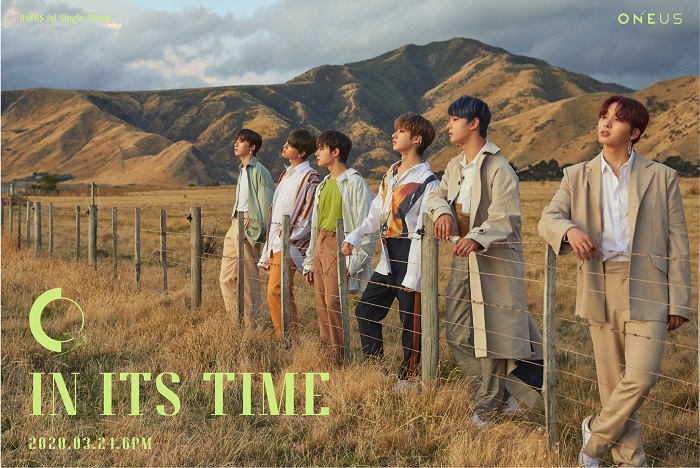 On March 12th, ONEUS announced their first single album comeback, ‘In Its Time’. The following day, the group released the first two concept photos for their return. Check them out below!

The concept photos show the group in the great outdoors. Their outfits for both photos match the backgrounds respectively, with neutral shades of brown to match the dried landscape in the first, and shades of bright blue and white to match the clear sky in the second.

It seems this time round, the group is incorporating this outdoor, or nature concept as the group’s logo, whilst featuring the signature half black and white ‘O’ shape, it now also features a flower on the bottom. Furthermore, the colour of the background of the teaser poster and font of the title in the photos are a bright green, indicating towards this type of concept.

The group’s last comeback was back in September 2019, with the release of their 3rd mini album, ‘Fly With Us’ featuring title track, ‘Lit’. How do you feel about the boy group’s comeback? Let us know in the comments below!