ONF finally give us more details about their comeback

ONF finally give us more details about their comeback

It’s been nearly two weeks since we had ONF‘s comeback confirmed, and finally, they’ve released a comeback schedule.

The schedule came in the form of a poster titled ‘ONF Comeback Teaser Schedule‘.  The schedule contains all the important dates for the comeback, including when the group will be releasing photos, videos and when they will hold their comeback showcase and album release – June 7 as we already know.

It looks as though it’s going to be a busy couple of weeks with teasers dropping every day starting from tomorrow, May 28 with the first photo teaser.

As reported previously the group filmed the music video for their comeback title track in the US recently. 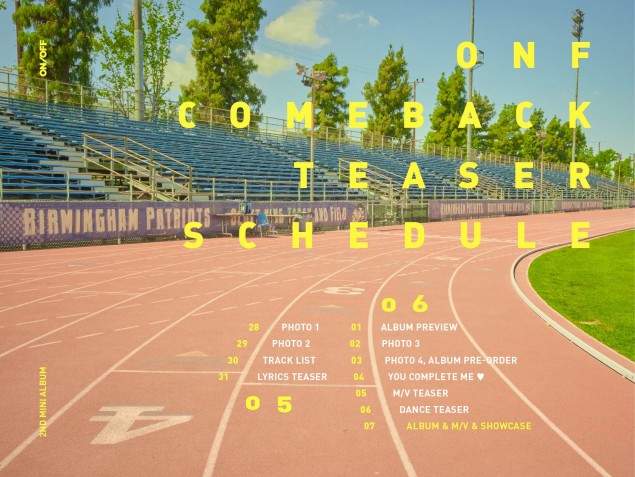 What do you think their comeback concept is going to be?  Do you think the running track in the schedule could be giving us a clue to an athletic concept for ONF?

Are you looking forward to their comeback?  Let us know your thoughts in the comments below.

Scroll for more
Tap
The East Light say their ‘Love Flutters’ in new MV
There’s only one day to go until SHINee’s comeback – but who’s counting?
Scroll