One of the biggest mysteries to Melodies has been the dramatic hair loss rapper Peniel suffered. The once fluffy haired idol mysteriously lost his hair after the era of ‘You’re So Fly,’ and has for the most part always worn a hat. For ‘New Men,’ Peniel took off his snapbacks and beanies and exposed his bald head for the first time.

The hosts at ‘Hello Counselor‘ began to ask about BTOB‘s new album but Peniel revealed “I really came because I’m stressed about my hair. For about five years, I’ve experienced hair loss. At first my hairstylist just said, ‘There’s a hole in your hair,’ but it continued to get worse. Every week, I’d get a new bald spot. The hospital told me that I have lost 70% of my hair. They say that treatment is difficult.”

While most baldness can be explained through genes Peniel stated “ Hereditarily, people lose hair from the crown or from the front, but I’m just losing hair in various spots.

Peniel said his parents also urged him to come back home to the United States and to quit being an idol. The ever humble and sweet Peniel said he couldn’t leave the band, the company, and especially the fans saying “I wanted to just confidently show it, but because of everyone else, [I had kept it hidden.]” 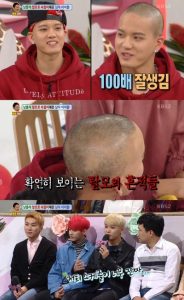 Peniel also opened up about the cultural differences he experienced once he debuted saying “Once I went to a recording with comfortable clothes — basketball shorts and flip flops — and manager scolded me as soon as he saw me. I thought to myself, because I debuted, I can’t even wear comfortable clothes…Also, I had a female idol friend who trained with me. I saw her at the broadcasting studio. I was happy to see her, so I went to her waiting room to talk, but the manager said that other people could misunderstand the relationship, so I shouldn’t talk to girl idols. I couldn’t even talk to them.”

Fellow members, Minhyuk, Eunkwang, and Changsub also came on the show as support. They stated that they had initially wanted to put promotions on hiatus, so Penial could go to the US since his stress and hair had gotten better during their time here at Kcon.

Regardless if Peniel has hair or continues to live with a shaved head, Melodies and BTOB members alike have been showing an outpouring of support and will be sure to continuing loving Peniel no matter how he looks!

What are your thoughts on this news? Let us know in the comments below!