Playback will return to the stage this month!

Playback will return to the stage this month!

After a long hiatus, five-member girl group Playback will finally be making a comeback!

In surprising news for the group’s fans, Coridel Entertainment posted Playback‘s comeback schedule on its official SNS accounts. Take a look below! 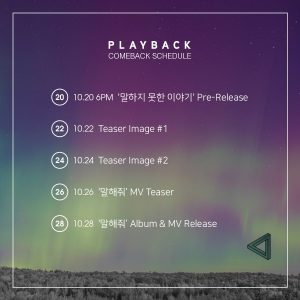 With Playback‘s comeback less than two weeks away, fans of the group have a lot to look forward to! Playback will release two teaser images and a MV teaser in the lead up to the release of their new album ‘Want You to Say‘ on October 28.

On releasing the comeback schedule, Coridel Entertainment also made a statement regarding the group’s promotions. The agency said, “It has been a long time since Playback released new music, and both Playback and all the staff are doing their best to show a good image with this comeback.”

Playback debuted back in 2015 with their self-titled track ‘Playback‘. In September of the same year, Playback teamed up with Eric Nam for a single titled ‘I Wonder‘. Earlier this year Eunjin, who also made her solo debut a few months ago, joined the group.

Playback will return to the music industry with title track ‘Want You to Say‘ on October 28!