Kwon Hyunbin has thrown his support behind upcoming girl group S.I.S and will appear in their first music video!

S.I.S‘s agency Double X Entertainment confirmed the news, saying that Kwon Hyunbin will play the role of the six girls’ love interest in the music video. The agency said that the music video will allow him to showcase both his “superior visuals” as well as his professional acting ability.

S.I.S have been gaining attention in the lead up to their debut as they have been sharing a lot of content with their fans through multiple SNS accounts! According to the group’s first single album promotion schedule, the members of S.I.S plan to release individual teaser images, teaser videos, and an album highlight medley, as well as holding V LIVE broadcasts as they countdown to their official debut later this month! 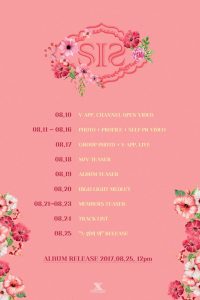 S.I.S is an acronym which stands for ‘Serendipity in Stars’, which expresses the group’s desire to share unexpected delight with their fans. The name also serves as a shortened form of the word ‘sister’, which is a reference to the group’s “girls next door” or “little sisters” concept.

The six members of S.I.S – J Sun, Gaeul, Minzy, Sebin, Anne, and Dal – have already released their profiles and self PR videos, which you can find on their official SNS accounts. S.I.S join groups such as Weki Meki and ONF making their debut this August. Are you looking forward to seeing S.I.S‘s unique take on the cute concept?

S.I.S‘s debut single ‘I Can Feel It‘ (literal title) will be released at noon KST on August 25!

Follow Officially KMusic to stay up to date with the latest KPop news!