Psy, who achieved worldwide domination with hit ‘Gangnam Style’ back in 2012, walked into 2019 in style! Psy announced a few days ago he has started his own company named P-Nation.

Psy joined YG Entertainment in 2010 and not long after, in July 2012 Psy went on to stir up the scene internationally with his music and moves that became contagious worldwide. The next month it was announced on Youtube to be number one on ‘Most Viewed Videos’ monthly chart and charted number one also on the iTunes Music Video Charts. Later on through the years after more releasing contagious music worldwide, album releases, features by artists such as Will.I.Am and fellow label idol CL, awards won and much more, Psy decided to depart from YG Entertainment and officially left on May 5th, 2018 after eight strong years.

It is only the first month of 2019 and the future of Psy seems to be getting even bigger and better! He has announced via his official Instagram that he has now founded his own company named P-Nation. There was news reports about rumours of this going to happen in the future around the time Psy left his previous agency but nothing was confirmed. His post on Instagram and news about the reveal of his new company has already caught attention from well-known celebrities like Tiger JK, Hyolyn, Gaeko and many more, congratulating him and showing support in comments under his post.

Psy already came in HOT by signing three famous K-pop idols and we are already so excited! First to join P-Nation is Korean-American rapper and singer Jessi. She has been on the scene since 2003 and still hotter than ever. Next up we have Hyunah and Pentagon’s E’Dawn who were originally with Cube Entertainment, but were removed. That didn’t seem to stop them as they continued to show off their beautiful relationship. They went public, attending their first event together on November 29th last year (read more here!). All that certainly didn’t stop them from making moves being the next artists to happily sign with P-Nation. 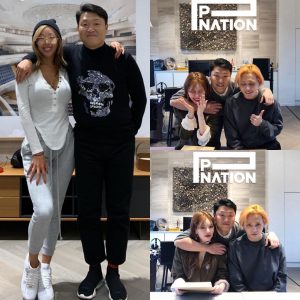 If this is only the beginning, we cannot wait to see whats next! What do you think of the first members of P-Nation? What else do you think Psy has up his sleeve for us all next? We would love to hear what you all think, let us know in the comments below!