www.pinterest.com
Rain’s Comeback Will Be in Late 2017

Korean singer and actor Rain told reporters on Sunday that his new album could potentially be released in November or at the latest in December this year.

Rain was interviewed while attending this year’s Viral Fest Asia in Bangkok, a digital music festival held in the Thai capital. The interview was the first that Rain has given since he married actress Kim Tae Hee in January and follows the recent announcement of their pregnancy.

“I am now leading a happy and pleasant life”. Rain said. “As you live, the yardstick for judging how happy you are can change. But at the moment I’m ecstatic”.

Rain, whose real is name Jung Ji-hoon, is currently in the midst of filming the biographical drama Uhm Bok-dong.

Uhm Bok-dong is the story of the Korean cyclist of the same name who became a symbol of pride for Koreans when he defeated Japanese cyclists and won the championship in a bicycle race during the Japanese colonial period (1910-45).

Rain said filming of the movie is 30-40 percent complete and he will be focussing his time and activities on it until mid-August. Once filming is completed he will turn his attention to his new album. 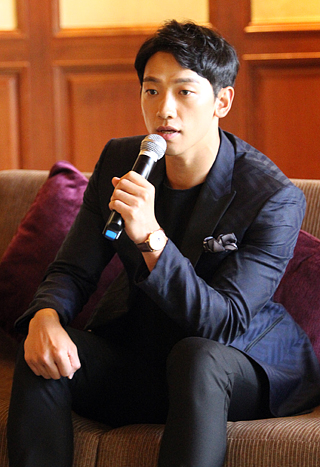 During the interview, Rain commented on the longevity of his career saying “I have been developing a new kind of dancing that could show the depth of my experience and prowess in singing and dancing that younger singers will find hard to emulate”.

He also talked about the possibility of focussing on other areas of his career, “I think after making aggressive approaches at least one or two times I will consider exiting the singing and dancing field”.

His latest comeback in January 2017 was The Best Present which was produced by Psy and dedicated to his wife Kim Tae Hee.

Keep up to date with the latest on Rain and his comeback at Officially Kmusic.