Red Velvet’s Debut Immersed In Controversy From The Start

Red Velvet’s Debut Immersed In Controversy From The Start

SM Entertainment has recently surprised many fans with the announcement and video teaser release of their upcoming new girlgroup, Red Velvet, and the girls have been facing ups and downs since then.

Although the debut of three members of SMROOKIES and a new member is being much anticipated by many fans, the group has been facing many controversies lately. For example, some fans believe that the reason why f(x)‘s promotions were stopped is the debut of Red Velvet, even though SM Entertainment has already explained that it was Sulli‘s decision.

Despite the rumors, the group has been receiving lots of love with their video teaser, especially from international fans. If the promotions work out well, it’s sure that the girls will become very famous soon and conquer the world with their unique style and incredible talents.

This success might be wonderful to them, but what if it affects someone else in a bad way?

The most recent controversy involving Red Velvet has to do with the name of the group. No, it isn’t one of the jokes with cakes that many netizens have been making, it’s a much more serious matter.

A while after the announcement of Red Velvet’s debut, a polemical text has been circulating around the internet. It’s a note from a girl who is a part of an indie group also named Red Velvet, who released their first single long before SM’s group. Take a look into it below: 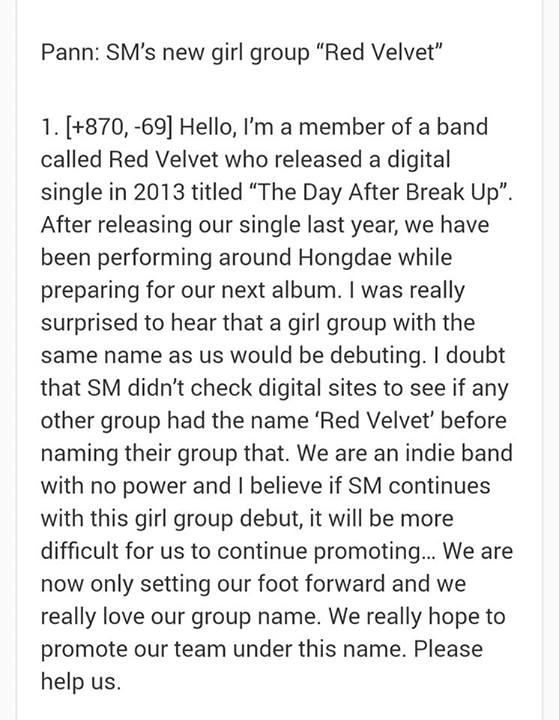 At first, you can simply think that this is some kind of hater that made this story up in order to affect the rookie group. However, the group is real. It’s formed by Kim Yoona and Ha Heesoo, and their song “The Day After Breakup” was indeed released in 2013, check it out:

On one hand, the girl is right. SM Entertainment is a huge international company with well trained workers who certainly did good research before choosing the name of the new group, which means that they might have been aware of the existence of the indie Red Velvet before the SM one was announced.

On the other hand, though, if the original group didn’t officially register their group name, SM can’t be blamed for using it, because it has no copyright. It’s understandable that the indie group and their fans feel injustice has been done to them by this situation because it will affect their career, but if this is the reality, there’s nothing they can do.

But even if the name was registered, would SM really not use it? It wasn’t that long ago that the group Mr.Mr. complained about Girls’ Generation using their name as the title of a song, because it would compromise their career since the girl group is much more famous than them.

The good side of this situation is that the original Red Velvet is getting more recognition due to this controversy, and they might end up signing with a big company and getting more fans even if they change their name.

What do you think about this situation? Who do you think is right? What decisions would you make if you were in any of the sides of the story?

Stay tuned to Officially Kmusic to find out how this story is gonna end!