K-EXCLUSIVE: The Return of the Kings of K-pop TVXQ Part 3 – Goyang fansign event

K-EXCLUSIVE: The Return of the Kings of K-pop TVXQ Part 3 – Goyang fansign event

On the 12th of April TVXQ held a fansign in Goyang, Seoul. The 3 floors of the giant Starfield shopping mall had fans present. They looked up surprised again at the large turnout of fans.

Even though I was 3 hours early, there were many fans already waiting for the epic duo. The event started late due to a busy schedule but the two enjoyed a nice time with us fans, smiling kindly and talking to all the 100 fans lucky enough to win the fansign.

Since the duo felt sorry for being late, they made up for it with doing cute fan service like Changmin wearing a flower crown a fan asked him to wear which he previously refused because he felt shy and embarrassed. Yunho was also gifted some surprising gifts like flower petals he blew out of his hand into the table and floor in front of it despite the managers frustrated reaction.

The ending was short and sweet because they were running behind schedule but it was a fun event. They were so kind and humble to us fans. It was worth it to be able to see them every time.

They are perfectly handsome and glowing with superstar vibes. If you ever see them in real life you will remember it forever. 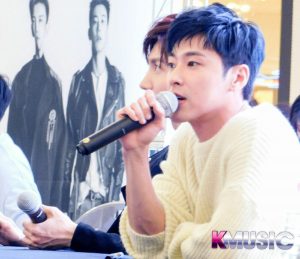 Stay tuned to Officially Kmusic for more adventures with TVXQ in Korea.