A dazzling new talent has burst onto the Korean music scene!

Rothy has made her debut with hip hop ballad ‘Stars‘. Check out the music video for the song below!

The opening chords of ‘Stars‘ set a reflective tone which is accentuated by the emotive harmonies Rothy‘s stirring voice builds over the top. A mixture of piano accompaniment and a definite percussive beat mean that ‘Stars‘ captures the emotion of a ballad whilst maintaining the groove of a hip hop track. Rothy‘s bridge ends with a second of silence which gives listeners the chance to prepare themselves for the spine-tingling chorus to come around once again.

Rothy‘s music video for ‘Stars‘ is beautifully filmed. It starts off full of grays and muted colours, but  throughout the chorus the singer turns on a light which fills the room with tiny stars. From here brighter colours become integral to the clip as Rothy searches for the stars themselves. The song’s climax comes as Rothy creates a sky full of stars, with the bright pinpricks of light standing out against the black of the night sky and complemented by the neon red glow of her stepladder. 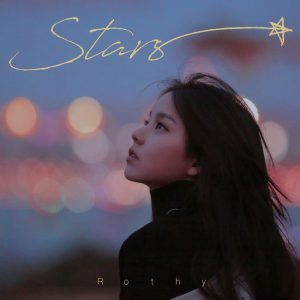 ‘Stars‘ was put together for Rothy by some big names in the Korean music industry. Veteran ballad singer Shin Seung Hun composed the track, whilst Kim Eana and Won Tae Yeon co-wrote the lyrics. Kim Eana has previously written the lyrics for hit songs such as IU‘s ‘Good Day‘ and Suzy X Baekhyun‘s ‘Dream‘. Lee Hyun Seung, who was involved in the production of Davichi‘s ‘8282‘ and Baek Ji Young‘s ‘Don’t Forget Me‘, also arranged ‘Stars‘. On top of all these names, Stuart Hawkes who mastered Ed Sheeran‘s ‘Shape of You‘ also mastered Rothy‘s debut track!

With the talent displayed in her first single, Rothy‘s career looks set to take off!