“Running Man“ HaHa and his musical partner Skull visited Singapore for their very first overseas fan meet as a duo, and held their press conference at the atrium of Square 2 on July 19th.

The Korean reggae artists have just released their new single, ‘Ragga Muffin,’ on June 27th and were in town to meet fans up close and personal. Singapore fans had the privileged to get a first taste of Skull & HaHa’s dynamic live performance, before the duo kick-starts their series of full concerts in Korea this August. 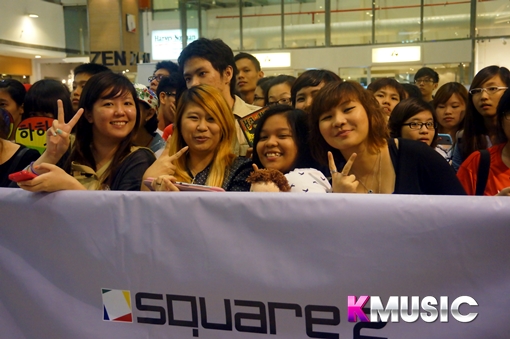 Eager fans arrived at the venue as early as 3pm in the afternoon. Many of them came prepared with Jamaican flag inspired signboards and fans, which they waved excitedly in the air.

Skull & HaHa arrived to screaming fans as they made their way down an escalator. By then, even the aisles on the different levels of the mall were filled. 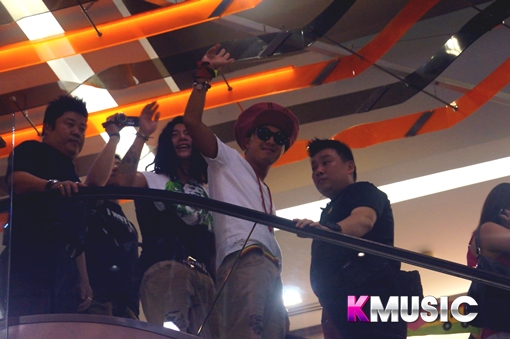 HaHa warmed the hearts of Singapore fans with a cheeky “Ni Hao” (“Hello” in Mandarin). Being his first time in Singapore, HaHa said he is very excited and sweetly thanked the media and fans who came all the way down to see them. Skull was also all smiles as he said, “It is also my first time (in Singapore). I heard there are so many beautiful girls in Singapore, I can tell!” 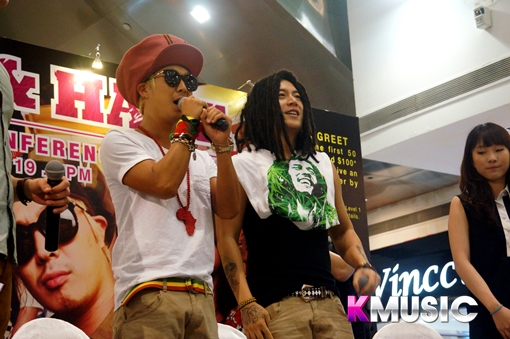 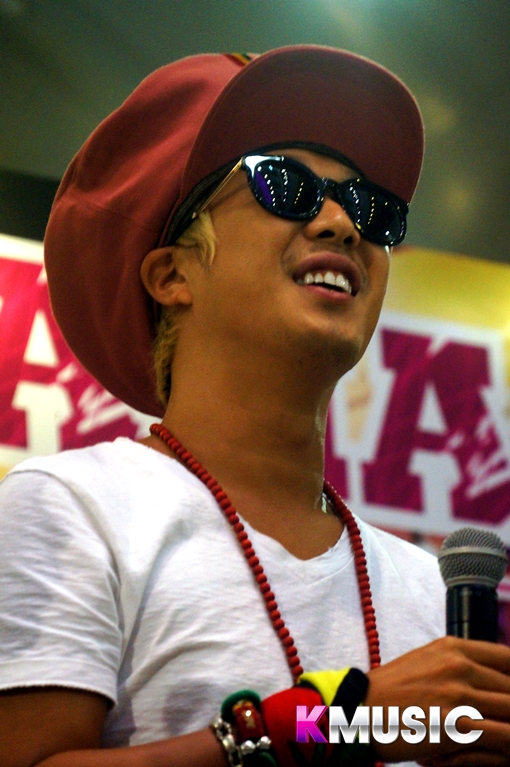 When asked about the best thing in promoting as duo rather than a solo artist, Skull explained that he started doing music as an underground musician, but HaHa is more of a singer and entertainer whom the public is familiar with. They compliment each other, and most importantly, their personalities mix really well. 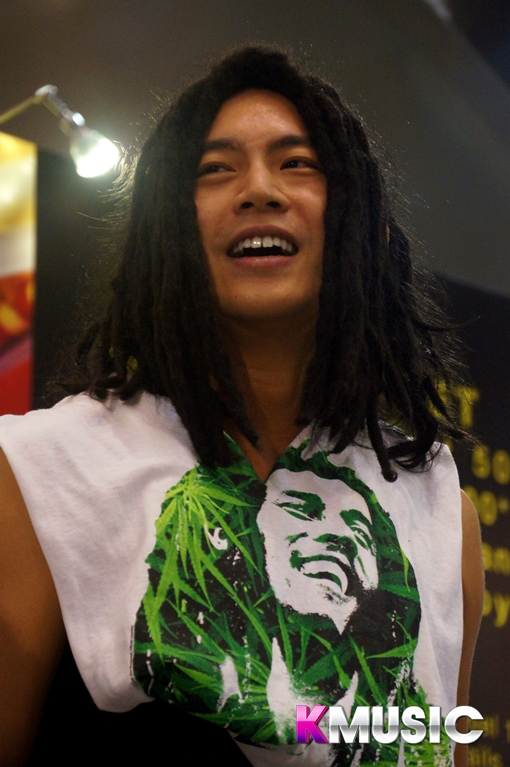 HaHa recently went from a new groom to a new daddy as he welcomed the arrival of his little prince with his wife, singer Byul. Since the baby is named Dream, HaHa was asked about the goal of their album and if Dream will help them achieve it. HaHa said, “Skull is a pioneer of reggae music in Korea. Also, I love reggae but sadly reggae is not that popular in Korea. Our dream is to popularize reggae and perform reggae onstage more.”

Another question asked was, “Now that you are a father, will you change your betrayal image on ‘Running Man’ to become a role model for your son?” HaHa’s answer? “If the program wants me to change, I will. I can do even more betrayal if the program requires,” garnering laughter from the crowd. 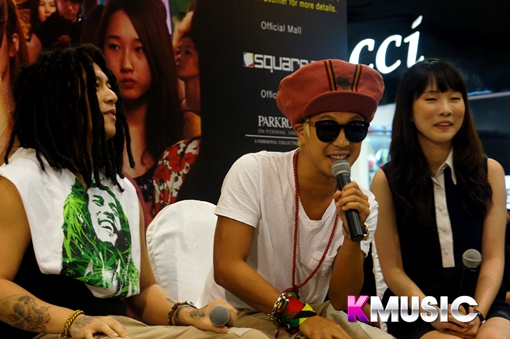 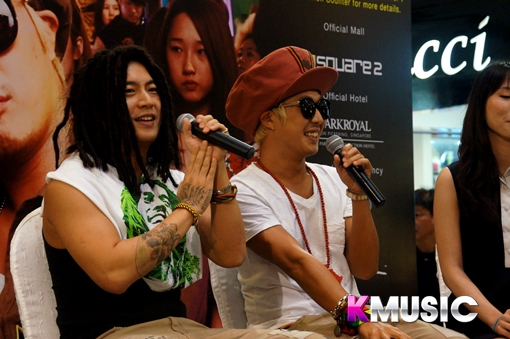 As expected, there were a handful of questions on SBS’s popular variety show “Running Man,” where HaHa is a member of the main cast. When asked if he had expected “Running Man” to be this popular, HaHa revealed that the show was not that popular in Korea when it first started and the popularity first came from South East Asia (SEA), which spread to Korea and the rest of the world. He sincerely thanked his SEA fans and hopes that as soon as the rest of the cast can free up their schedules, they could have a fan meet in Singapore. Fans, keep your fingers crossed!

The crowd also roared when HaHa shouted “Thank you Singapore!”

Skull was then asked if HaHa’s skyrocketing popularity ever made him jealous, to which he exclaimed “Of course I’m jealous!” and the duo laughed. He later said he was kidding and expressed that he is really happy for him and glad that they are here in Singapore to promote. 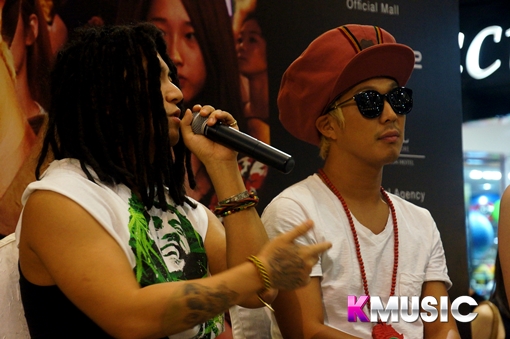 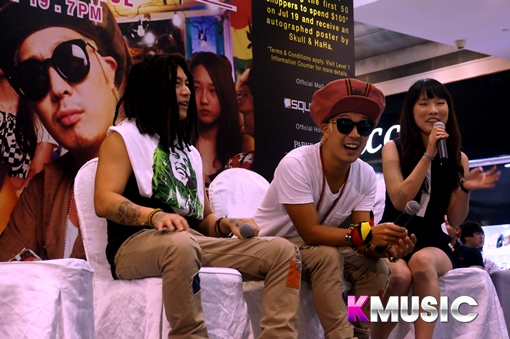 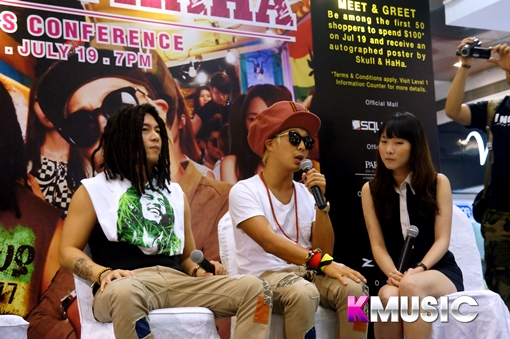 Coming back to their music, KMUSIC asked the duo if there is any challenge in making reggae music since it is not a mainstream genre in most parts of Asia. Looking thoughtful, Skull shared, “Though reggae is a lonely genre in Korea, I’m glad that it is getting more popular. We had a hard time, but we feel proud that more and more (people) are catching with this music.”  Talking about the duo’s latest release, Skull revealed that “Ragga Muffin” is a remake and there is some difficulty as the original song is not reggae. He then added, “But our remake has a lot more energy! HaHa really love this song.” 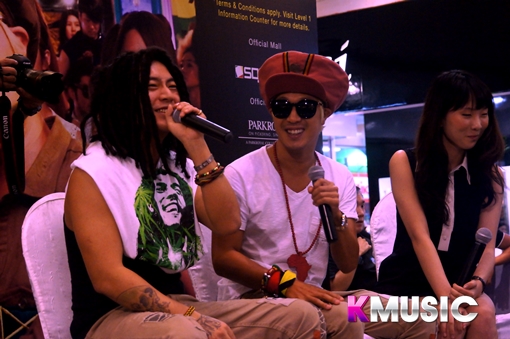 According to the Korean media, HaHa had told the concertgoers to wear bikinis. When asked to give everyone a feel of how it will be like, HaHa labeled the concept as ‘WET’. “There will be water cannons onstage and everyone will get wet. That is the kind of passionate concert we are designing for Korea”, he said.

During the interview, Skull also revealed that HaHa is much more tough and manly than he looks and that he ‘drinks alcohol very well’. HaHa went on to say that Skull has a really hot body and fans will get to see his good physiques when they come to the showcase. 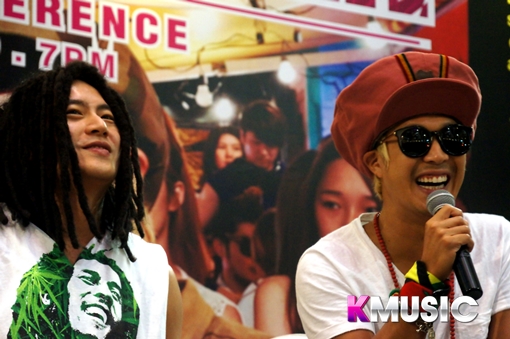 Finally, the artists were asked what would they like to try in Singapore.  Other than Chili Crab and Satay, HaHa said, “Skull really needs to meet a nice girl here.”

Scroll for more
Tap
BEAST Throws 2,000 Signed Hearts to Fans at Concert
Sunggyu of INFINITE Shares Interesting Story of Getting Revenge on his Mother
Scroll