Samuel’s teaser suggests his debut may be right around the corner!

The Produce 101 contestant posted the teaser on his official Twitter account on June 20. His tweet contained a link to a video which chronicles his time as a trainee; from training to join Seventeen, to debuting as a member of 1Punch, and finally participating in the hit reality show. The video was set to new song ‘I’m Ready‘, and the tweet finished with hashtags of the song’s name as well as ‘Coming Soon’. Check out the clip below!

The letter which appears in the video clip was also posted to Samuel‘s official Instagram account on the 20th. The letter reads:

Hello! This is Samuel!

Thank you for giving me so much love and attention. I learned a lot through Produce 101 Season 2. Filming Produce 101 Season 2 for four months was difficult and tiring, but every time I received a message of love and support from my fans, it really helped me a lot. Thank you so much for supporting me whenever things got tough. I think it is all thanks to you that I could have come this far. To the fans who sent me letters and voted until the end, I love you so much! I will repay the love you sent me!

I’ll greet the fans with a cool album very soon! Please wait until then, and please keep supporting me!

I will be a Samuel who continues to work hard! 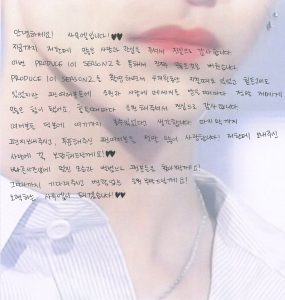 News of Samuel‘s impending solo debut broke earlier this week. You can read the statement from Brave Entertainment here! According to his posts, fans can look forward to something special on Brave‘s VLive channel at 7pm KST on Wednesday June 21!

Keep following Officially KMusic for the latest news in K-Pop!