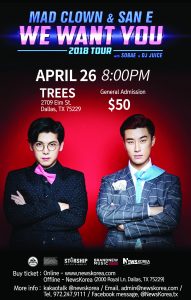 San E of Brand New Music and Mad Clown of Starship Entertainment have announced the official dates for their upcoming,  U.S. tour together labeled, “Me Want You.”

San E, formerly signed to JYP as their first solo rapper, has gained notoriety through his flowing rhythm and visual success. He has also made appearances on both popular Korean programs, Show Me The Money and Unpretty Rapstar. Mad Clown has a notoriety of his own, boosting Starship Entertainment (currently also housing Monsta X, Cosmic Girls and Soyou) he is known for his sharp and high toned raps, but has also been on program Show Me The Money as a producer on the fifth season. The two first collaborated on hit “Sour Grapes” which was released in 2015 and has reached six million views.

The two rappers will be joining together to embark on a month-long tour throughout many major cities, including New York, Dallas, Seattle and Los Angeles and will end on May 1 in North Carolina.

Tickets for Dallas and Chicago will be sold via Kamoflage and Dallas showcase through NewsKorea here.