Se7en Takes Pictures with Other Soldiers During Training

Se7en Takes Pictures with Other Soldiers During Training

Se7en took pictures with other soldiers during basic training. 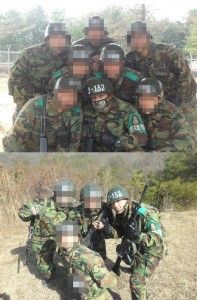 These photos were uploaded on the 8th division’s new recruit training center’s official café. He was in the middle of training when these photos were taken, there is also a mark on his arm signifying him as the squadron leader, just like LeeTeuk from Super Junior.

Se7en is in his third week of his five week basic training period, once he’s done he will be serving for 21 months. He had enlisted in the army to the 306th reserve on March 19, and then had moved to the 8th division’s new recruit training center.