On the back of the news that they were in the process of filming two music videos, SECHSKIES have confirmed a release date for their first studio album in 18 years.

The group recently hosted the ‘2017 SECHSKIES Awards’ on a V-Live broadcast where they talked about their upcoming 20th anniversary concert and album.  The V-Live broadcast was scheduled to look back on the group’s history together.

During the broadcast the band’s leader Eun Ji Won said, “Our 5th album is coming out soon.  We’re only working on new songs for this album.”

He continued, “We have a lot to do, from preparing our new album, rehearsing for our concert, as well as getting ready for our Osaka fan meeting.  We’ve had our share of filming for our new MV.  We want to stop filming now.  Please look forward to our 5th album.”

YG Entertainment have now dropped a teaser image confirming that the release date of the album will be September 21. 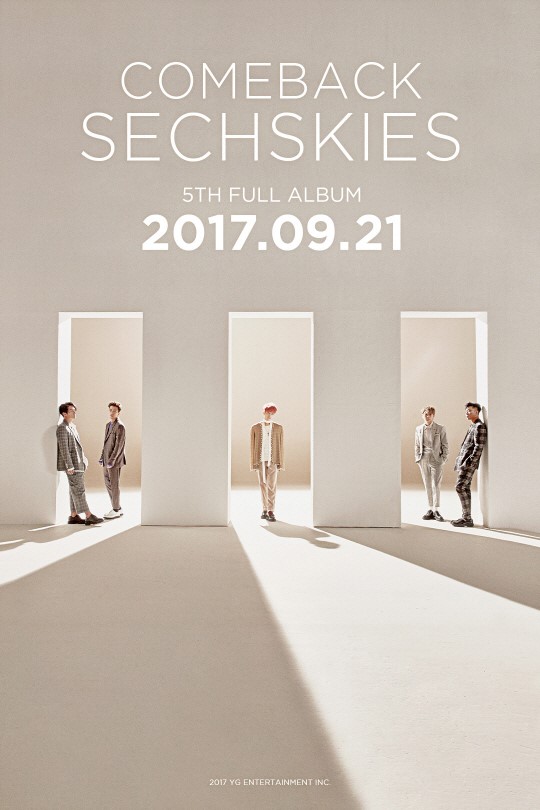 SECHSKIES will be holding their 20th Anniversary concert at the Gocheok Sky Dome in Seoul on September 23, just two days after the album release.

What do you think of the news of SECHSKIES first studio album since 1999?  Let us know in the comments below.

Scroll for more
Tap
B.A.P. take us on their ‘Honeymoon’
GiKwang knows ‘What You Like’ in new MV
Scroll
Loading Comments...