YG Entertainment has confirmed that Big Bang member Seungri has been readmitted to the hospital.

The preliminary report stated that Seungri left the hospital early in order to prepare with the rest of the Big Bang members for the closing ceremony of the Inchon Games , but he fainted due to a high fever and was readmitted to the hospital. YG Entertainment just confirmed that a tube must be reinserted to drain blood and fluids from his chest due to those injuries. 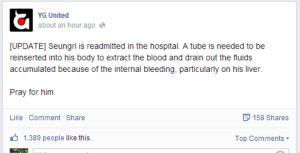 “Seungri is readmitted in the hospital. A tube is needed to be reinserted into his body to extract blood and drain out fluids accumulated because of the internal bleeding, particularly on his liver. Pray for him.”

Seungri was originally injured when he crashed his car on the 12th of September, he later had to have surgery to correct internal injuries.  Sadly he was not as healthy as he or anyone would have liked.